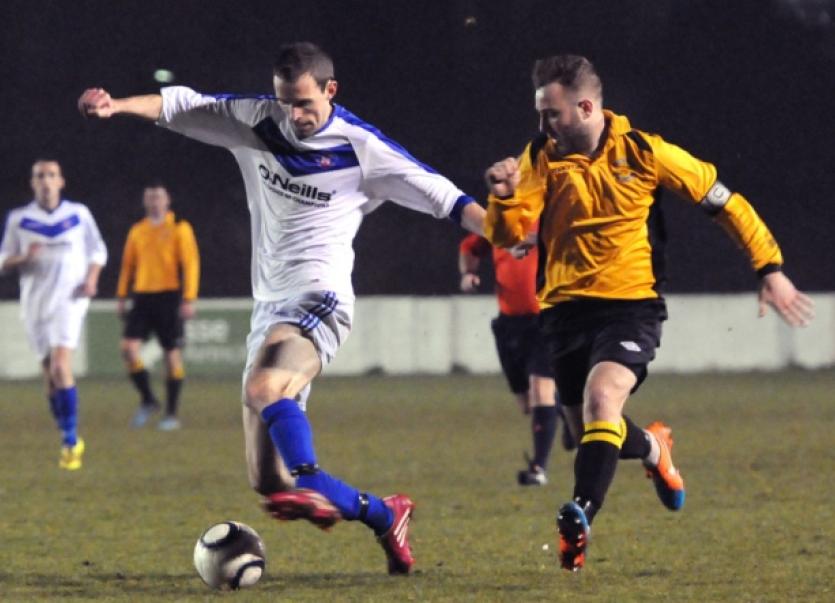 THE Limerick District League advanced to the last four of the Oscar Traynor Cup with a more than convincing 2–0 win over their Kilkenny counterparts at Jackman Park on Friday night.

THE Limerick District League advanced to the last four of the Oscar Traynor Cup with a more than convincing 2–0 win over their Kilkenny counterparts at Jackman Park on Friday night.

It was an impressive performance from the home side who continued their improvement game on game.

With a little more composure could have chalked up a hatful of goals in this one. But the Management will be buoyed by some fine individual performances, most notably Craig Madigan, Aled Harkin and Mike O’Gorman.

Limerick opened the scoring in the 22nd minute, when a Craig Madigan pass sent Mike O’Gorman clean through, and he coolly slotted the ball away to give the home side a well deserved lead. Limerick piled on the pressure to double the lead, with Eoin Hanrahan firing just wide, and the same player supplying a pass that went narrowly too far in front of the onrushing John Tierney.

Limerick’s inability to take their chances almost cost them 10 minutes before the break when David Grineall beat Kieran O’Connell on the dead ball line, but skewed his shot across Gary Neville’s goal.

Limerick finally settled the nerves, and indeed the tie, when slick passing between John Connery and Shane Clarke set Craig Madigan free, and his effort produced an excellent save from the onrushing keeper. The rebound fell to Connery, and his drilled cross was gleefully converted by Madigan.

Limerick looked to push home their advantage, but Clarke was once again to be denied, this time by the full back Pounz, who cleared his header off the line.

The hosts had more chances in the latter stages through O’Gorman and Waters, but two goals was to be their lot and it was enough to see them through to the semi-final.