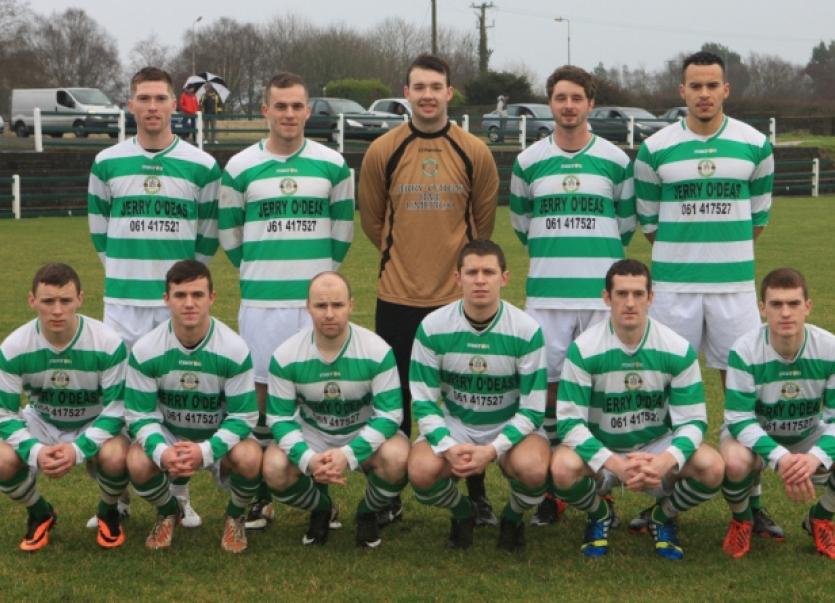 Premier League leaders Pike Rvs took a huge step towards regaining the title when they defeated champions Carew Park at the Pike club on Sunday morning.

Premier League leaders Pike Rvs took a huge step towards regaining the title when they defeated champions Carew Park at the Pike club on Sunday morning.

The Hoops did it the hard way coming from behind to win their 11th straight game in the competition.

The visitors started well and after three minutes Gary Neville was forced to make a superb save from a Mark McGrath volley from Jonathan Grant’s delivery.

Six minutes later it was Carew’s Jamie Stewart’s turn to make a fine save. John Tierney put in a cross that was met by the climbing John Okoro which brought the best from the keeper.

Shortly after Pike went close again. Dave Ryan was the supplier this time and Okoro rose above his marker but Stewart made another fine save to keep the scores level.

Carew took the lead on the stroke of half time when a Pat Boyle free-kick was met with a glancing header by the in-form Jonathan Grant to put his team in the lead at half time.

Just after the break John Tierney went close to levelling the scores when he dribbled through three Carew defenders but the onrushing Stewart was on hand again to prevent the score.

The equaliser came in the 52nd minute when a long kick out by Pike’s Neville was flicked on by Reece Healy to Seamus O’Carroll who hit a sweet strike into the top corner to level the scores.

Pike began to search for the winner and Eddie O’Donovan fed a great ball into Okoro but his bullet shot from 6 yards out was somehow saved by the impressive Stewart.

When it looked like ending all square Pike struck at the death. O’Donovan played in Tierney who immediately set up Healy to fire the winner past Stewart and to the joy of the Pike supporters.

Pike are now on 33 points seven points clear of second placed Janesboro while Geraldines are in third on 25 and Carew are four points further back on 21 in fourth place.