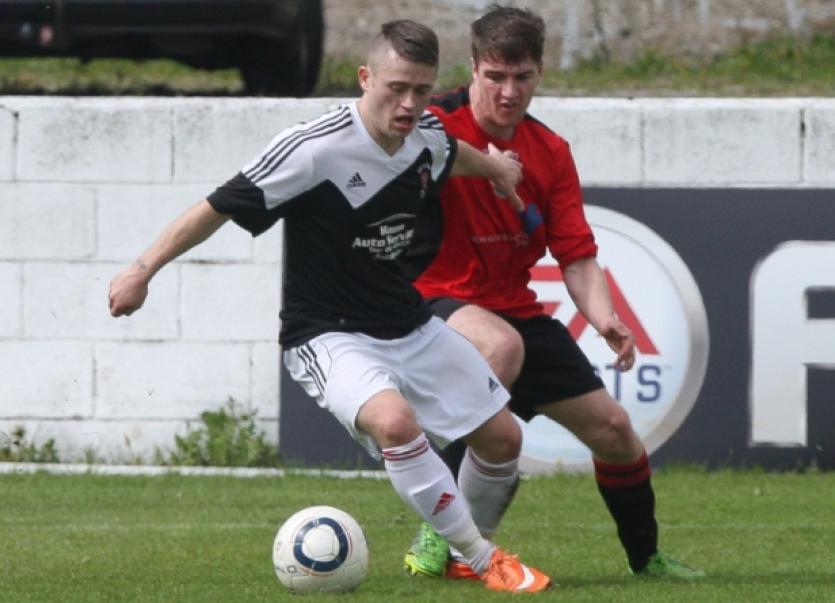 AISLING caused the shock of the season in the Premier Division with a gritty performance that saw them inflict the first League defeat of the season on Pike Rovers on a 2-1 scoreline.

Fighting for their Premier League survival, Aisling were full value for the win while the defeat is a disaster for Pike who no longer have control of destination of the title.

Mike McCarthy’s men, inspired by a super performance from Adam Frahill had the best of the opening half and took the lead just after the restart when Brian O’Donovan raced past two defenders to fire home from 12 yards.

A lack of concentration saw Pike back on level terms within two minutes when John Tierney’s free kick sailed directly to the net with the defence caught watching.

CAREW Park kept their title charge on course with a clinical performance against Corbally United.

Scoreless at the break Carew opened the scoring after the restart when Jon Somers crossed for Jonathan Grant to head home.

Mark Slattery hit a superb 25 free kick to the roof of the net ten minute later to secure the win.

A penalty from David Dunphy late in the game denied Summerville a much needed win at Shelbourne Park.

Lee Somers had headed Summerville into the lead but in th end they had to settle for a point.

Colm O’Mahoney put Moyross ahead in this one before Denis Fitzgerald restored parity for the home side. Eddie Byrnes put Fairview in front but a brace of second half goals from Anthony Lee gave Moyross all points on offer.

Two goals from Danny Galvin (2) and one from David Cowpar helped Regional to three points at home to Geraldines.

Craig Reddan had given ‘Dines the lead put they flattered to deceive.

Pike Rovers maintained their charge to retain their title with a nervous one goal win over Moyross on Thursday evening.

Not for the first time in his Pike career Colm Enright proved the hero for Pike with a crucial goal just before half time.

The home side had to endure some intense Moyross pressure after the break and but for some fine saves from Gary Neville and some poor finishing could well have seriously dented Pie’s aspirations.

Despite taking the lead with a spectacular Eddie O’Brien effort, Regional had to give way to a strong Balla finish which saw them take all three points on offer.

Derek O’Hanlon equalised for the homesters and two goals in the final two minutes from Alex Purcell and Jamie Bromell secured the points.

Despite their lowly League position Hospital B pulled out all the stops to capture the Division 4 Keane Cup at Jackman Park on Friday evening.

The County side went into the tie as underdogs but showed fine battling qualities and snatched victory just as the game was heading for extra time.

Dromore started well and after ten minutes Brian Cullen hit a good effort but was thwarted by a fine save from Hospital keeper Tommy Sheehy.

Hospital’s Kevin Meade showed neat skill on the edge of Dromore box beating two players but Meskell was again to the fore while at the other end a superb delivery from Alan Cussen sent Brian Cullen away but Sheehy was quick off his line to effect a good save.

Dromore’s Shane Grace was lording it in midfield and after 35 minutes delivered a ball into the Hospital danger zone that begged a final touch but his team mates were not on the same channel.

A lovely flick on by Ed Cussen sent the lively Philipe Rodriquez Brazilian away down the left but he was unable to make the chance count.

A quick Hospital attack and a super through ball by their number Leahy sent Meade away but again Meskell made a good stop and a great ball across the box by Ed Cussen picked out Cullen but he failed to apply the required finish. .

Hospital came out firing on all cylinders in the second half Meade should have opened the scoring when he latched onto a free kick. A lovely through ball by Hospital Dale Frawley put Meade in again but Meskell was equal to it.

Hospital were well on top now with Meade in the thick of the action, firing inches over the top from just outside the box.

A quick breakaway saw Cullen play Alan Cussen into space but the midfielder blazed over the top.

The game had extra time written all over it when Hospital were awarded a free kick on the edge of the box. Dale Frawley stepped up to curl a beauty into the bottom corner which seemed for a score worthy of winning the Cup.

To their credit Dromore chased an equaliser but a couple of half chances was their lot as Hospital held on for a memorable win.