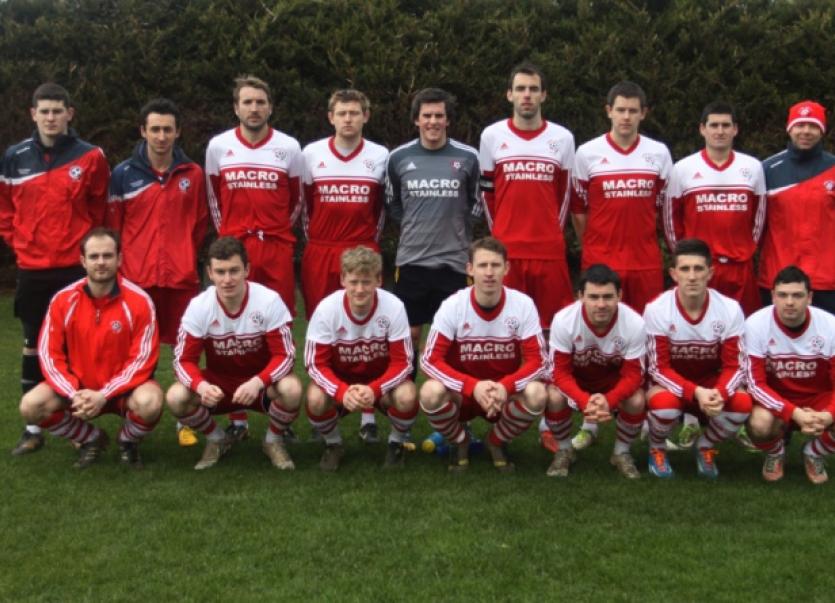 Pat Sheehan previews the weekend soccer action in the LDMC where the highlight is the clash of Regional Utd and Carew Park in the FAI Junior Cup.

Pat Sheehan previews the weekend soccer action in the LDMC where the highlight is the clash of Regional Utd and Carew Park in the FAI Junior Cup.

Regional Utd v Carew Park in the FAI Junior Cup fell foul of the weather last Sunday week but is re-scheduled for this Sunday, this time Carew Park favoured with home advantage.

The winners will join Ballynanty Rvs and Geraldines in the hat for the quarter final draw and with both sides in fine form we are guaranteed a cracking cup tie.

Carew Park went down in a recent League game to Pike Rvs and a few weeks earlier surprisingly lost to Kilmallock in the Munster Junior Cup but prior to that went unbeaten since the end of September.

Likewise Regional Utd who qualified for the last eight of the Munster Junior Cup last weekend.

The Dooradoyle side did it the hard way going a goal and a man down before coming back to win the tie against Kilmallock on a penalty shoot out.

There is little to choose between the sides and their one clash this season went the way of Carew Park back in August on a 3-1 scoreline.

The one advantage Carew will hold is the firepower they possess. In 12 Premier League games this season Carew have bagged 36 goals while Regional with a game less played have only netted 15 goals but no doubt managers Gordon Cowpar and Tom O’Connell are aware of this and are working on it.

On the up side the form of David Cowpar and Kieran O’Connell along with Brian O’Callaghan and keeper Rob Shier gives them plenty of reason to be positive.

After winning the Premier League last season, Carew had a dreadful start to proceedings but with the addition of a number of young lads, they have improved no end.

The scoring form of Jonathan Grant is phenomenal, bettered narrowly only by International striker Shane Clarke of Janesboro.

Mark McGrath is also a serious threat to Regional while Pat Boyle and former Regional player John O’Leary are also in fine form.

Pity one of the sides has to exit at this stage, but hopefully both teams give a good account of themselves and entertainment for the large crowd sure to attend.

Following Regional and Geraldines progress in the Munster Junior Cup last weekend, it is the turn of Ballynanty Rvs and Janesboro to try make the quarter finals of the Provincial tournament.

Ballynanty Rvs are at home to Nenagh AFC while Janesboro travel to Waterford to take on St Saviours.

They beat Carrick with ease last week despite the one goal difference and are playing with a confidence that has them willing to take on all comers.

Nenagh will be a difficult side to beat but in the right frame of mind Balla should have enough in store.

Boro travel to a St Saviours side lying third in the Waterford League. While the home side went down 3-1 to Carrick at the weekend they will be well up for Sunday’s game while Boro, without a game in a month, will be hoping their sharpness is not affected.

With the winners of both games meeting in the last eight hopes are high for an all Limerick clash.

Aisling Annacotty carry Limerick hopes in the FAI Youth Cup when they host a Villa FC side that are sure to prove a stern test for the Limerick lads.

In the Lawson Cup Croom Utd host Newport while the Geraldines bandwagon is expected to roll on when they host Div 2A side Southend. The on all-Premier side pits Granville Rgs v Corbally Utd in Glenbrook.

There is one Premier League scheduled with Fairview Rgs taking on a Wembley Rvs side clinging to survival by a thread.

In Div 1A leaders Mungret Reg host Caherdavin Celtic while Knockainey welcome Shannon Hibs and Thursday evening’s game is the Div 1A O’Halloran Cup clash of Kilmallock and Hospital with a 7.30 kick off in Jackman Park.