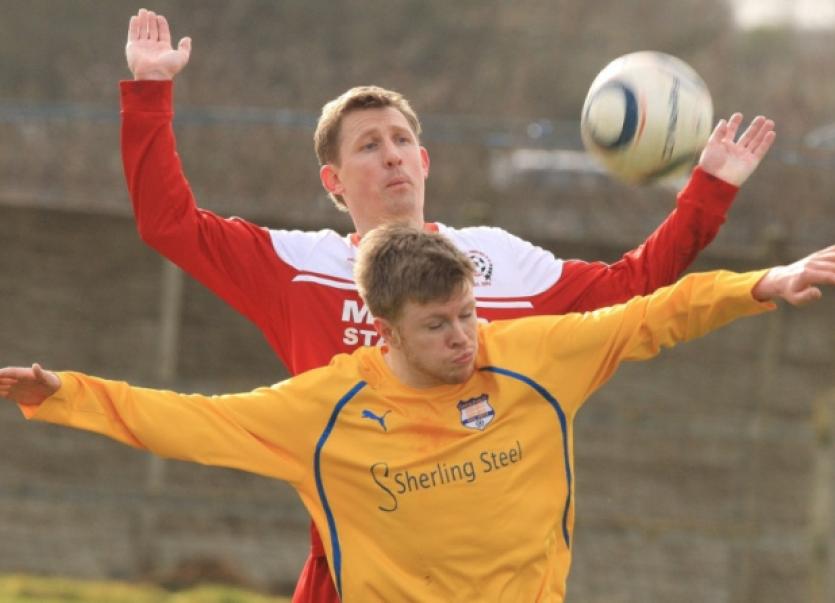 Pat Sheehan rounds up all the weekend junior soccer action as Carew Park booked their place in the quarter-finals of the FAI Junior Cup.

Pat Sheehan rounds up all the weekend junior soccer action as Carew Park booked their place in the quarter-finals of the FAI Junior Cup.

The missing link in the final eight of the FAI Junior Cup was decided on Sunday when Carew Park beat Regional 3-1 in Carew Park on Sunday morning.

Great credit is due to the home side who had their pitch in tip top shape for the game, making it hard to believe we have had monsoon type weather over the last number of weeks.

Along with McGrath, John Connery and Jon Grant had the visitors chasing shadows at times but in truth other than the goals neither keeper was overworked.

In the middle of the park Pat Boyle and Barry Dillon won their duels while Mark Keane dominated at centre back.

Regional opted to stick with a lone front man and again it failed to give them the platform required to get past a team like Carew.

They started brightly and could have had a couple of goals in the opening ten minutes but once Carew took the lead their confidence seemed to dwindle.

The missed chances proved costly when Carew Park opened the scoring with their first attempt.

A foul on the edge of the box on John Connery presented the free kick for Pat Boyle who curled a fine shot into the net off the post.

A snap shot from Boyle minutes later could have crept in had Shier not been alert but it proved a temporary reprieve for the visitors as Carew doubled their lead ten minutes before the break.

Regional lost possession in the middle of the park and a quick breakaway ended with John Connery teeing up Mark McGrath to hit a sweet shot to the roof of the net.

The contest was over on the hour mark. A harmless looking ball across the Regional defence was not cleared and McGrath gratefully accepted before unleashing a drive that gave Shier no chance and Carew an unassailable lead.

Both sides brought on their reserves and it was Regional that started to get the upper hand.

Regional got a glimmer of hope seven minutes from time when Cowpar’s clearance deceived the Carew defence and sub Mark Purcell raced through to get one back.

Minutes later a long range effort from O’Connell again brought the best from Stewart but the last action of note was an audacious attempt by Grant that was not too far off the mark.

Carew now join fellow Limerick hopefuls Balla and Geraldines in the last eight with the draw being made in a couple of weeks time.

Ballynanty Rvs made it through to the quarter finals of the Munster Junior Cup after a hard earned win over Nenagh AAFC at the Pike Rvs club on Sunday afternoon.

It was a story of two goalkeepers as the net minders on either side performed heroics throughout to keep the game scoreless.

If Balla keeper Stephen McNamara emerged the her he was followed closely by veteran David Dunphy who was superb in the middle of the park for the home side.

Following their progress to the last eight of the Munster Junior Cup, Balla made it a season to remember by reaching the same stage of the provincial tournament where they will meet the winners of St Saviours of Waterford and Janesboro.

The visitors came well prepared and went closest to opening the scoring early on when Tony Shepard put Cathal Coonan through but Balla keeper McNamara made a super save.

Minutes later, at the other end, David Dunphy was pulled down on the edge of the area and took the resultant free kick but Nenagh keeper Aaron Savage made a stunning full length save to turn the ball over.

Savage made another superb save shortly after to deny Tony Fahy after the striker was played through by Dermot Fitzgerald.

Before the break Balla’s luck was in when Nathan Kelly’s goal bound shot was knocked onto the post by McNamara and Dara Hughes got back to clear off the line and not to be outdone Savage had the last say of the half coming to claim the ball off the head of Fahy after a fine Balla move.

The second half provided more of the same with McNamara saving well from Kelly and Galvin while Savage denied Fahy and Dunphy.

With five minutes to play Balla got the perfect opportunity to win it when they were awarded a penalty kick.

Up stepped Dermot Fitzgerald who hit a vicious shot that would have produced a goal 9 times out of ten but Savage produced a wonder save to send the game to extra time.

Two tired sides played out the extra 20 minutes with the most worthy action another save by Savage that turned Fitzgerald’s header from a Dunphy free kick over the top.

In a thrilling shoot out successful attempts by Dunphy, Fitzgerald, Jamie Bromell and Dara Hughes along with two saves by McNamara sent Balla through to the last eight.

High flying Geraldines were made to earn their passage in the Lawson Cup when they hosted a game and talented Southend side on Sunday morning.

With the experience Declan Considine calling the shots for the visitors, they made life difficult for the Premier side who required two goals in the last ten minutes to see them off.

The game seemed to be going to plan after 20 minutes when Colin Daly was fouled in the area and Shane Byrne stepped up to convert the spot kick.

However the visitors had other ideas and when Dara Sheehan took advantage of sloppy defending shortly afterward he levelled the scores with a fine goal.

The rest of the half was played out in an evenly fought affair.

After the break Geraldines upped the tempo and Pat Moloney twice struck the post before Shane Byrne had a shot cleared off the line.

However with 20 minutes remaining Southend had a great chance to snatch the lead when Colm Carroll was released by Greg Grant but shot inches wide of the ‘Dines goal.

The miss was compounded five minutes later when Eddie Lee delivered low to the front post where Colin Daly nipped in to finish and restore the homesters lead.

It was game over minutes later when a hand ball presented George Daffy with a penalty kick that he converted expertly.

Kilmallock qualified for the quarter finals of the Div 1A O’Halloran Cup with a comfortable 4-1 win over a depleted Hospital XI at Jackman Park on Thursday evening.

The winners opened the scoring after 20 minutes with a cracking strike from Kieran Stubbins from 25 yards out.

Bennie Burke doubled the advantage before the break.

After the restart the winners continued to dominate and Derek McCarthy tacked on number three.

Hospital pulled one back but Kilmallock completed the scoring courtesy of Paul Doona.

In Div 3A Northside need just two more victories to secure promotion following their 8-0 demolition of Newport at LIT Astroturf on Sunday afternoon.

Bobby Griffin was scorer in chief netting three times while Shane Guerin and Dessie Fitzgerald netting two apiece. Top scorer in the Division Frank Daly had to satisfy himself with just one.

In the FAI Youth Cup Aisling Annacotty put up a good performance before bowing out 3-1 to Waterford side Villa FC. Jack Cleary scored the Aisling goal.