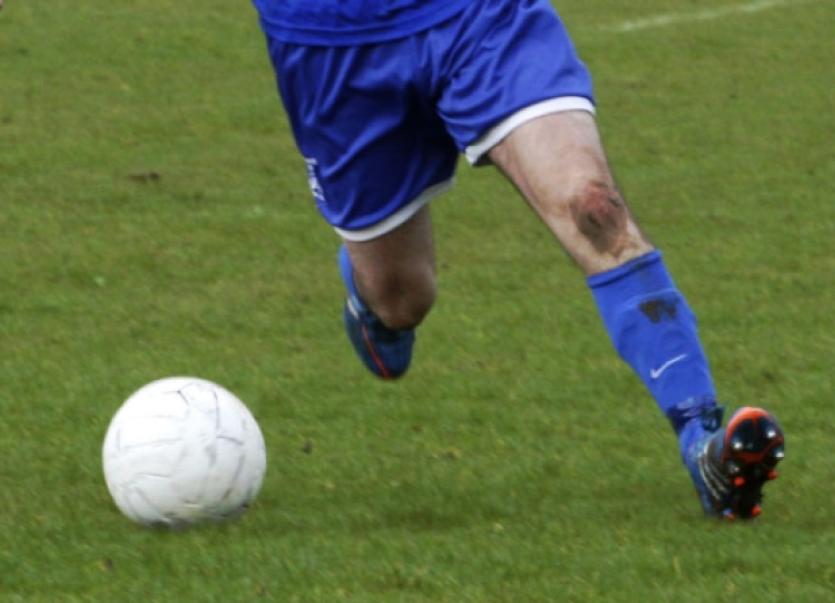 Pat Sheehan rounds up all the weekend soccer action in the lower leagues of the LDMC.

Pat Sheehan rounds up all the weekend soccer action in the lower leagues of the LDMC.

The race for promotion in Div 1A took another twist on Saturday when Kilmallock beat leaders Knockainey to open up the contest. Paul Doona and Tommy Heffernan were the winning marksmen.

A last minute goal from Keith Ryan kept up Moyross’ challenge in a 2-1 win at Pike Rvs. Pa Roche netted the opener for the winners.

In Div 1B Cappamore took a huge step towards the title beating closest challengers Murroe by the odd goal in five. Seamus Ryan, Shane O’Gorman and Alan Wallace scored for the winners while Alan O’Carroll hit a double for Murroe.

Ballynanty Rvs B accounted for Janesboro B with goals from Alan Wallace (2) and Frank Walsh while Shane Dillon (2) and Kieran O’Donoghue netted for Charleville in their 3-2 win over Prospect Priory; Ian Clancy and Darren O’Hanlon replied.

Killian Costello (2) and Nathan O’Callaghan were on the mark as Fairview Rgs B beat Aisling Ann B 3-0 while Corbally beat Regional Utd B 4-0; Dermot Hughes (2), Jake Elliot and Dave McPhillips obliged.

Southend took a huge step towards the title beating Glenview Rvs with Hill Celtic being held scoreless with Summerville Rvs. Soren Abid (2) and Dave Grant scored for Southend in a 3-1 win.

In Div 3A Moyross achieved their promotion with a comfortable 6-0 win over Murroe.

Danny Sheehan and Glen Woodland scored a hat trick apiece for the winners.

Northside scored an important win as they close in on the title. Goals from Jamie Daly (2) and Frank Daly saw off Granville Rgs B on a 3-1 scoreline. Kevin McCarthy scored for Granville.

Star Rvs beat Lisnagry 3-1 to stay top in Div 3B but their celebrations were dampened following an injury to Christy Reddan.

Shelbourne C went down to Parkville with scores from Mike Worthy and Dan Lynam.

In Div 4 Cappamore B are one win from being crowned champions following a 9-1 win over Moyross C. Goals from Adam Keogh (3), Gillan Piveteau (3), Colin Ryan, Eric Conroy and Kevin O’Connor did the damage with Anthony Begley getting the reply.

In Youth Div One Newport beat Corbally Utd 4-3. Kalem Harte and Keith Mawdsley hit two apiece for the winners as did Aaron Nunan for Corbally.

Goals from John McManus (2), Eoin Ryan and Mark Dillon gave Mungret the points against Caledonians for whom James McNamara replied.

In the Under 17 Div One Nathan Randles and Gavin Mullins scored to keep Corbally Utd top after a 2-1 win over Regional Utd.

In Div Two Coonagh and Caherdavin Celtic played out a 2-2 draw. Luke Doherty and Ian Considine scored for Coonagh; Peter Casey replied with two for Celtic.

Parkville beat Knockainey with scores from Dylan Considine, Stephen Aherne and an own goal.