Oireachtas report: Limerick to vote on directly elected mayor next May 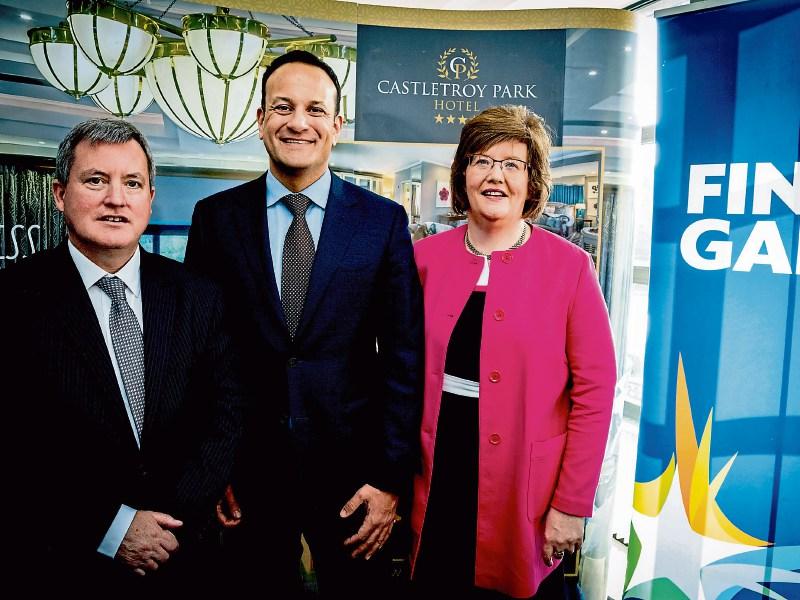 An Taoiseach Leo Varadkar, pictured with Senators Kieran O'Donnell and Maria Byrne, has confirmed Limerick will hold a plebiscite on directly electing a mayor next May

“The Minister for Finance, Deputy Donohoe, was reported as stating there was no proper costing of the proposal and the Attorney General as stating there were no details of what the powers of the mayors would be,” he said.

“Will the Taoiseach indicate if the Government has decided whether there will be plebiscites for those cities in May? If so, when does the Taoiseach expect the mayors to be in place?”

In reply, Taoiseach Leo Varadkar said the Government has decided there will be plebiscites in May for Limerick, Galway, Cork and Waterford.

“We confirmed that decision at Cabinet,” he said. “As to when the mayors will be in place, that will depend on many factors. We have to get the legislation for the plebiscites through the Dáil and Seanad and that could be tight.

“With the co-operation of everyone in this House, however, we could have it through in time for the referendums in May. It depends then on whether the people in those cities decide to vote for the proposals.”

Concern at unemployment figures in the Mid-West

The employment figures for the Mid-West have not improved in latest figures from the Central Statistics Office for the third Quarter of 2018 rather they have been stagnant, Labour Deputy Jan O’Sullivan told the Dáil.

“That was reflected in the figures with a 3% improvement nationally,” she said.

“I absolutely acknowledge that there have been significant improvements since the first quarter of 2015 when the Regional Action Plan for Jobs was launched in the Mid-West,” she said.

“My concern is that the improvement has apparently stopped. We need to take action now to ensure employment will continue to grow.

In the Mid-West there is excellent interaction between higher education and educational establishments generally and employment and industry. It has produced very positive results in recent years. My concern is that it has stopped.

“I ask the Minister to contact IDA Ireland, Enterprise Ireland and other bodies under her aegis to ensure any issues that needs to be addressed is addressed in order that we can continue to improve the position in the Mid-West.”

In response the Minister for Business, Enterprise & Innovation, Heather Humphreys said in the Mid-West region there has been an increase in the number of people in employment, from 196,500 to 215,300, since the Regional Action Plan for Jobs was launched, that is, from the first Quarter of 2015 to the third Quarter of 2018.

“In the same period the level of unemployment has reduced, from a high of 12% to 7.2%. In real terms, the number unemployed in the Mid-West region has decreased by 10,300 in the period since the first Quarter of 2015.

The CSO labour force survey reports no change in the numbers in employment in the Mid-West in the year before the third Quarter of 2018. However, it also reports a decline in the level of unemployment of 2,600 in the Mid-West region in the same period, which is very welcome.”

The makers of the science fiction series "Nightflyers", which was made in Troy Studios in Limerick and released recently in the United State were congratulated by Fine Gael Senator Maria Byrne.

“The Irish embassy in the US tweeted and congratulated the film-makers on the premiere, which was shown on 2 December,” she said.

“It is a series of ten films made in Limerick. It is important to acknowledge the number of people involved in the apprenticeship and training scheme during the making of the series.

“Troy Studios said that if the series was a success the producers might come back to make the next production there as well.

“The important aspect is that people have been trained and have gone through the apprenticeships and skills side of the process.

“They now have the skills so if the producers come back to Troy Studios, they will be available for employment.

“The series is to be released on Netflix and I encourage people to watch it because it is not too often we have a science fiction series made in a local film studio. I wish to congratulate all involved.”