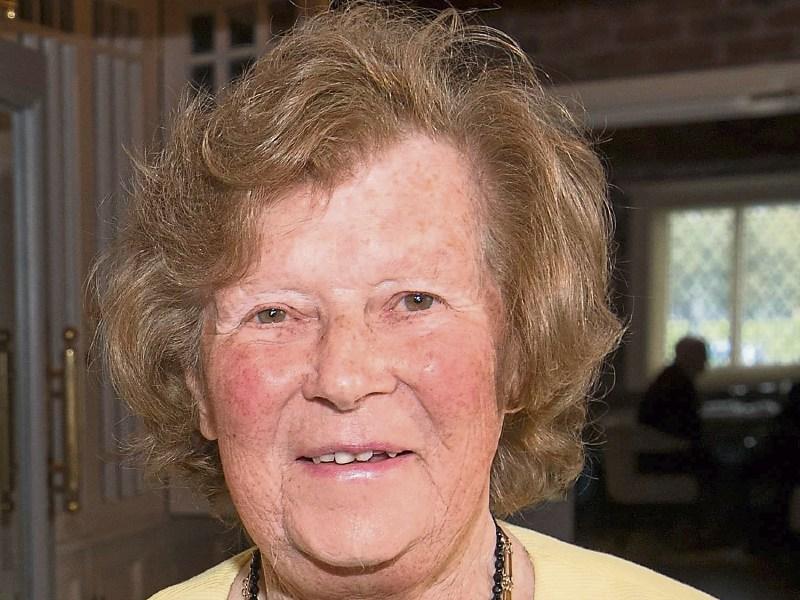 On Tuesday, February 9, Shannon laid one of its founders to rest.

Despite the inclement weather and Covid-imposed restrictions, people participated in a socially distanced guard of honour, lining the roads from Eileen Garvey's home to Saints John & Paul Church.

Past and present staff and pupils of her beloved Shannon Comprehensive School stood, together and apart, in front of the school to honour her legacy – the education of a town. They applauded as the hearse paused, then passed. More people braved the icy winds to stand outside the church to participate in the funeral Mass itself.

Eileen Houlihan was born in Castleconnell, County Limerick in 1933, the eldest of eight children. After the Leaving Certificate, she entered teacher training and had her first permanent teaching appointment in Craughwell N.S. She taught there for five years, attending night and weekend classes at NUIG to acquire her university degree.

In 1957, she took on a new job in St Vincent’s Convent, in Cork, with the ambition of pursuing a second university degree in music. Another teacher taking the same course, a Clareman by the name of Clem Garvey, captured her heart and she his.

They married in 1959. Their children Denise, Séamus, Clem Jnr. and Fin were all born in Cork in the early and mid-sixties.

In 1968, advertisements appeared for the staffing of Ireland’s first Comprehensive School, in Shannon, Co. Clare. Excited by the concept and by the opportunity to use their talents not only for the school but also for the establishment of a new community, they moved to Shannon in September 1968.

Clem taught music and Eileen was promoted to head of the English department, assuming responsibility for the school library. It was in this role that she became so well-known in the town of Shannon. Every first-year student in the school spent one period in the week in a “Library” class, where they would read, producing a “book-review” of each work consumed. The love of reading she inculcated in her precious charges featured in many of the tributes paid to Eileen.

For twenty-five years, every pupil at the school came through Eileen’s care in first year. It is no exaggeration to say that she engaged with thousands of Shannon’s first children. Many were fortunate enough to have also been taught English, as a subject, by her.

One tribute from a past pupil was the following: “I have lovely memories of reading ‘The Portrait of a Lady’ in her English class. ‘She would be what she appeared, and she would appear what she was.’ Just like Mrs Garvey herself, a lovely lady.”

The constitution of the school embraced service to the community. Eileen produced some of the school’s first musicals which were important community events. She and her colleagues organised successful arts weeks and creative writing workshops. Eileen was also a founder member of Shannon’s bridge club and was treasurer of the Society of Care.

Eileen and Clem retired from Saint Patrick’s Comprehensive in September 1993. However, their desire to continue to contribute to the education of young people led them to take-up appointments to teach English in a secondary school in Botswana, where Eileen’s love of children and of teaching was reciprocated with love from her pupils.

Eileen and Clem taught in Botswana for three years, returning home in a round-the-world trip, visiting old friends who had lived in Shannon during its Duty-Free Zone heyday and making new ones along the way. Eileen re-engaged in the community, reading for the blind and volunteering in the Shannon bereavement group.

With adored grandchildren in Galway, France and the UK, Eileen and Clem travelled frequently to nurture their relationships with them. They celebrated their 45th wedding anniversary by assembling children and grandchildren for a week, during which the family recorded various choral music pieces, sung together. This was the music played at Eileen’s funeral on Tuesday.

Eileen took great pleasure in singing with the resurrected Non Nobis Domine choir. One of the most emotional moments of Tuesday’s funeral was the singing of their anthem (“Not Our Will, But Yours, Lord”) by socially distanced members of that choir, as Eileen’s coffin exited the church.

The final years of Eileen’s life were very happy ones. She and Clem celebrated their sixtieth wedding anniversary in Shannon in 2019, in the company of family and friends.

Covid-19 denied Eileen a big, traditional funeral. However, had there been such a funeral, as many people might not have taken the time to express in writing their respect, admiration and gratitude. In so doing, the people of Shannon, Limerick and many other places, recorded the enormity of the personality that was Eileen Garvey, a lady loved by the town, a woman who died, peacefully, last Saturday week.

Shannon lost a mother. The town’s response ensured that she will always be remembered.