Then & Now: John B the man from Listowel 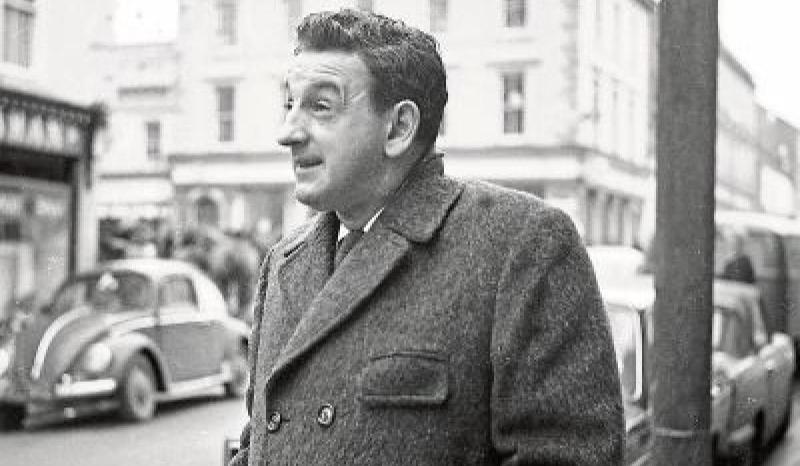 A little under 60 years ago, the playwright John B. Keane commenced writing a weekly column for the Limerick Leader that would run across the following four decades

NEWSPAPERS HAVE always been a part of my life even from a very young age, and each week a few were brought into the house.
They included the Limerick Leader, Sunday Press and a few daily papers for the sports reports and previews. As soon as I was able to read, I was attracted to their contents with sports a main interest.
One became familiar with the writers’ names and the topics they covered and eagerly looked forward to their weekly contributions. John B Keane the man from Listowel in north Kerry was one of those writers.
His weekly column in the Limerick Leader ‘Out in the Open’ was a must read from an early age. This came about because of the connection with my father and John B Keane, who were corresponding with each other. John B had a number of people from different areas who he would feature in his column. The news from their area he would use to form the contents of his weekly offerings with his own observations and twists. For a person or place to feature in his wide-ranging column gave a lift to all back in the dark days of the 1960s and 1970s. Being a pub owner he also found material from his interaction with his customers.
Talk in the bar often provided inspiration for him, with stories colourful language and phrases straight from the tongues of his customers finding their way into his plays and books. John B in his writings immortalised many characters from around the locality including Dan Paddy Andy, the matchmaker, Sonny Canavan and his talking dogs, the Ballaugh bachelors, Joe Quaid from Athea, who rose from the dead, Jackie Faulkner, Paddy and Ruckard Drury and the events around Listowel north Kerry and West Limerick.
When John B was 17 and a student in St Michael's College he wrote his widely renowned poem, The Street. At a class in his Leaving Certificate year the students were asked to recite a poem by the teacher, and he recited The Street. When asked who wrote it, he received a beating because the teacher who had a violent temper did not believe him. The poem was included in his book The Street and Other Poems published from Progress House Dublin in 1961. Verse one:
I love the flags that pave the walk
I love the mud between
The funny figures drawn in chalk
I love to hear the sound
Of drays upon their round
Of horses and their clock-like walk
I love to watch the corner-people gawk
And hear what underlies their idle talk.

John B Keane was born in Listowel to William Keane, a teacher in the local school and Hannah Purtill on July 31, 1928. His mother, Hannah, came from a nationalist family and worked as a draper. During the Civil War, Hannah was a member of Cumann na mBan and ran messages for the IRA. He was the fourth eldest of a family of ten, among five brothers and four sisters including RTE and Abbey actor Eamon who died in 1990. He attended Listowel National School and St Michael's College Listowel.
The initial ‘B.’ stood for Brendan, a name taken on confirmation after St Brendan the Navigator. He worked as assistants to Chemists William Keane Stack, WH Jones and O'Donovan's Chemist Rathkeale for a short time. He emigrated to England in 1951and worked in a ball-bearing factory in Northampton. In 1955 he returned to Listowel, buying a public house for £1,800 and married Mary O'Connor, whom he met at a dance in the Astor ballroom during the Listowel Races in 1945. They did not get married until six years later and they had four children, Billy, Conor, John and Joanna.
In 1959 John B's first play, Sive, was produced by Listowel Drama Group. The production won the All-Ireland Drama Festival in Athlone and toured with it throughout the country. He followed with a yearly succession of plays that included Sharon's Grave, The Highest House on the Mountain, The Man from Clare, and the Year of the Hiker. The first production of The Field was staged at the Olympia in Dublin in 1965, with Ray Mc Anally as the Bull and Eamon Keane as the Bird. This work was inspired by the murder of north Kerry farmer Moss Moore in 1959.

Limerick-based Ukrainian refugees treated to trip around coast of Clare

The first production of Big Maggie was staged in 1969 and his first novel The Bodhran Makers was published in 1986. In 1990 Jim Sheridan adapts The Field for the big screen , with Richard Harris as the Bull, Brenda Fricker as his wife Maggie and John Hurt as the Bird. The first production of Moll was in 1991, and a year later Durango A Novel was published and later adapted for television with Brenda Fricker.
On May 30, 2002, John B died, aged 73, after a long battle with cancer at home in Listowel.
Noel Pearson said that John B was unique and connected with people. He was a literary master, but his gift wasn't just that he had a way with words, he had a way with people. Niall Tóibín who played the Bull Mc Cabe in The Field remembered John B for his wit and the pleasure he gave to people across the country. John B said I was the smallest Bull he had ever seen but that I'd scare the ‘shite’ out of the devil. It is probably one of the best compliments anyone has ever paid me in all my years on stage. Brenda Fricker said I am honoured to have worked with his beautiful words , so full of music, sadness and joy.
Brendan Kennelly poet and close friend paid him a hand -written tribute which can be seen in John Bs bar. The last verse follows:
God bless your heart
God bless your pen
God bless your spirit free
I thank the God
Who gave my word?
The spirit of John B.

A portrait of the late John B Keane was unveiled in the bar of the Gaiety Theatre in Dublin on May 29, 2014. The porcelain blue and white painting depicts writer and playwright John B at various stages of his life, with his wife Mary standing in the background watching him. ‘’ Sure, isn’t it a grand place to be keeping an eye on the man himself’’ Mary Keane said. ‘’ I am absolutely delighted with it - It’s a kaleidoscope of his life as it captures everything about him. It was painted by renowned artist Cian Mc Loughlin and commissioned by MCD’s Caroline Downey and Denis Desmond.
It is now twenty years since the death of unquestionably rural Irelands greatest spokesman John Brendan Keane, playwright, novelist and essayist. Gone but not forgotten he continues to entertain the Irish people through the performances of his plays by drama groups throughout the land, plus his books and vast number of writings. When it came to wit , humour, and a way with words, he was definitely the daddy of them all.