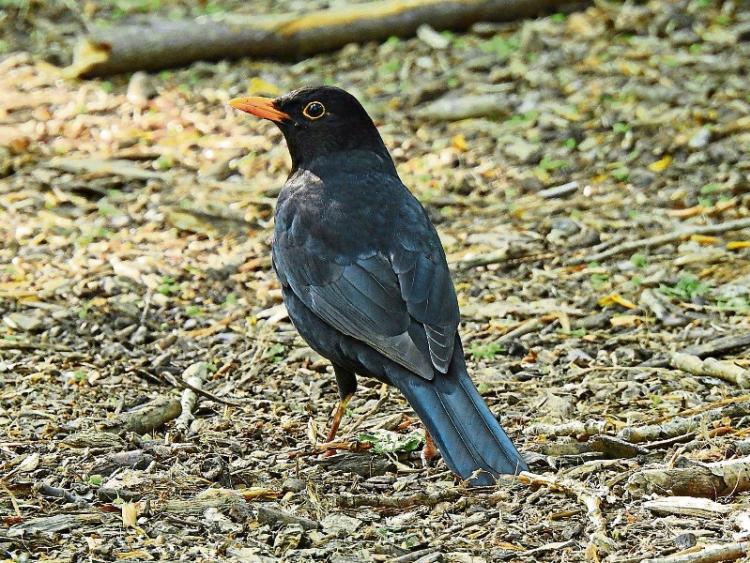 THE WHEEL of the year keeps turning despite the Covid -19 pandemic, and spring is making way for summer. It is the time of flowers blossoming, trees leafing, and birds singing. A time of sowing and planting, of rebirth and fertility. The long dry spell of weather since Saint Patrick's Day has seen nature at its best. Many people have been amazed at what they are now seeing and listening to as life moves to a slower pace. I wonder what they were doing up to the arrival of the virus on February 29, as it was all around us all the time. The old saying comes to mind, it's not what you are looking at, it's what you see.

One of the glories of spring is birdsong and for many nothing excels the exquisite warbling of the blackbird. They were formerly known as Ouzels; male blackbirds are stunning jet-black birds with orange bills and eye rings. The female is less spectacular, a darkish brown. The blackbird was much loved in ancient Ireland for its melodic song, being praised in many poems and stories as a symbol of the beauty of nature. In some tales the blackbird is linked to blacksmiths, perhaps because of the colours of its feathers and beak resembles the black soot and golden fire.

Blackbirds were said to impart mystical messages and it was believed that they could freely pass into the otherworld. They are associated with the druids and the Welsh goddess Rhiannon. They could put a person into a trance by the beauty of their singing.

There is a story about Saint Kevin of Glendalough and blackbirds from the seventh century, Once, when Kevin was alone on retreat in a cabin in the woods, he put his hand out the window while he was praying. As he remained long in that position , in praise of God, a blackbird came and landed on his hand, built a nest, and laid eggs there. Kevin remained in that position, enduring pain, until the chicks were hatched and departed. Seamus Hennessy wrote a poem about this tale, entitled "St Kevin and the Blackbird".

The blackbird is a member of the thrush family, so is a cousin of the song thrush , mistle thrush, the ring ouzel,(a summer visitor) and the redwing and fieldfare, winter visitors from Scandinavia.

As blackbirds are fond of berries, they and other thrushes were often hunted and killed. The Earl of Stafford (Lord Lieutenant of Ireland 1640-1641) commented that he flew hawks after blackbirds in the Phoenix Park which attracted many spectators. Blackbirds were not liked by the common people from their habit of ripping thatch off the roof, in search of insects, or nesting material.

Oisín, in his lament for the old days of the Fianna when he returned from Tir na nÓg, states that he prefers "the chatter of the blackbird of Leitir Laoi to the music of the clergy, and later says: "Blackbird of Doire an Chairn, your voice is sweet; I never heard on any height/music sweeter than your voice".

The blackbirds referred to in the old nursery song "Sing a Song of Sixpence" may have been rooks, but we do know that in the twelfth century live birds were sometimes enclosed in pies and brought to the table where they were released and hunted by falcons. The blackbird's song is exquisite, musical soft and balmy, the perfect sound tract to spring and summer like no other bird.

READERS MAY have guessed by now that May is one of my favourite months of the year, as it is the time when nature explodes, all round us and the sweet scented air, is alive with the sound of birdsong. The birds are happy and busy as they rise early and go to sleep late. The tunes of the blackbird are sweet, melodic, and throaty and the cuckoo call when it echoes along the valley is delightful to hear.

Nature has a way of making every day different beautiful and unique. It is nice to celebrate nature, not just for its own sake, but as an expression of the glory of God who is credited with creating the world. There is so much to admire and give thanks for including a tapestry of colour and growth during the month of May. It can often be the simple things in life, which can give people the most pleasurable of gifts for the least amount of effort.

One of the things that give me pleasure during this time is the sight of the wild bluebell, whose flowering time covers April to June. The bluebell woods of Ireland and Britain have been written about over the centuries, and they are considered to be some of the most spectacular floral displays in Europe. The bluebell forms carpets in woodland and scrub, and are to be found also on hedge banks, and sea cliffs.

The flower blooms just as the trees are coming into leaf, and they are an easily recognisable plant. The fragrant nodding violet blue flowers have creamy white anthers. They are clustered on one side in groups of five, to fifteen, each flower ending with two blue membranous bracts on its base. The narrow dark green leaves, which rise from the base may persist for some weeks after flowering.

How lovely it is to stand in the heart of a bluebell wood and see the blues, spread out on every side. The trees are waking slowly into life and the birds sitting upon the boughs, sing songs as if celebrating nature also. The light shining through the trees, onto the flowers make them shimmer and shine, in all their splendour.

While walking through a carpet of bluebells, a person can be filled with the wonders of the world all round them. The bluebell flower can lift the spirit, of renewal, restoration and hope, especially during the Covid -19 lockdown, as the wood is still a place of wonder and healing as it has been for so long for so many people.