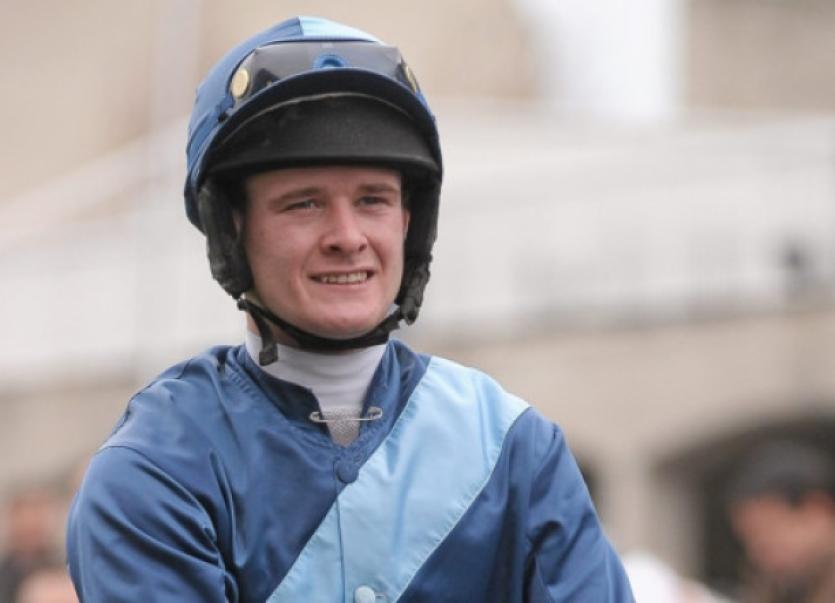 In her weekly Limerick Leader racing column, Katie McNamara looks back at a successful week for Limerick jockeys.

In her weekly Limerick Leader racing column, Katie McNamara looks back at a successful week for Limerick jockeys.

It has been quite an eventful past week as we saw three of our top county Limerick jockeys all record doubles at Fairyhouse, Dundalk and Naas.

Last week got off to a flyer with county Limerick jockey Brian O’ Connell riding a 231/1 double at Fairyhouse.

The former amateur rider has a strong partnership built up with Cork Handler John Joe Walsh and steered his Push the Button to victory in the Family Day 14th of July Handicap Hurdle.

It was the geldings first run for Walsh and he will be kept going in the coming months if the ground is not too firm.

Having previously beaten one of Doyle’s inmates in the afore mentioned race on Push The Button, Doyle was very much compensated as O’ Connell gave Lord Alfie a well timed ride to take the showpiece by a head.

McNamara gave the Sheikh Mohammed owned gelding a faultless and confident ride from the front where he shook the filly up two furlongs out to take the contest by a comfortable length.

The daughter of Teofilo looks a promising sort and it would be no surprise to see her repeat this feat next time out.

McNamara went on to double his victory an hour later as he claimed the Dundalk Stadium on Facebook Maiden aboard the Gordon Elliot trained Bayan.

The 15/8 favourite had won last time out in Cork over hurdles and McNamara was fairly confident of his chances as the gelding was fit and had good form to his name on the flat when he was trained in the UK. The son of Danehill Dancer chased the leaders for the first mile and was produced to challenge at the two furlong pole by McNamara who got the four year old up by ½ a length in a strong driving finish.

Shanagolden jockey Chris Hayes has been in terrific form of late and continued a good run of success at Naas on Saturday.

Taking the Naas Racecourse on Facebook rated race by a neck for trainer Paul Deegan, Hayes made virtually all on Talitha Kum who toughed it out best in a thrilling finish with the Aidan O’Brien trained Fortify.

Hayes made it a day to remember as he also visited the winner’s enclosure once again with Allegra Talk.

The Harry Rogers trained mare was winning for the fifth time in her career and it was Hayes’s ninth winner of a great season so far.

Saturday’s meeting at Tramore also proved successful as jockeys Robert Jones and Andrew McNamara both posted winners on the board.

Rathkeale native Jones has enjoyed a great partnership with Adrian Maguire in the past and the pair teamed up once again last week with Qhilimar.

Having been rated 142 in his prime, the Whites of Coventry limited gelding had lost his way and had showed promise on his previous start last time out at Limerick.

Jones gave the son of Ragmar a positive ride from the front from start to finish where he had his opponents well strung out at the finish, taking the race by a length and three quarters.

A delighted Maguire remarked afterwards ‘The owners hired a small plane to come over here but I tried to persuade them not to! They had a few quid on him too.

He has been disappointing and I hope the handicapper isn’t too hard on hi now’.

Qhilimar looks to be coming back near to his best and if a race with similar conditions is his next target, then he may be a good bet.

Croom jockey Andrew McNamara was making his presence felt as well on the sunny evening where he guided the Maurice Phelan trained Meitheamh to victory in the Irish Stallion Farms EBF Mares Maiden Hurdle.

The secret to many of these winners for our Limerick lads this week seemed to be as a result of a front running performance and Enright’s ride aboard Lady Boulea was no different.

Putting up a tough and gutsy display, the daughter of Windsor Castle was all heart as she kept on in the run in to take the first division of the Ingard Point Maiden Hurdle by a length and a half.

I’m sure Enright has a lot to look forward to in Punchestown next week where he will be crowned Champion Conditional for the 2012/2013 season.

Ballingarry trainer Charles Byrnes also trained a great winner at Wexford last Friday with Not For You taking the second division of the Ingard Point Maiden Hurdle.

The Byrnsey Boys syndicate owned gelding was well supported and was winning for the first time.

The syndicate involves the trainer’s sons which made it an extra special occasion for the handler.