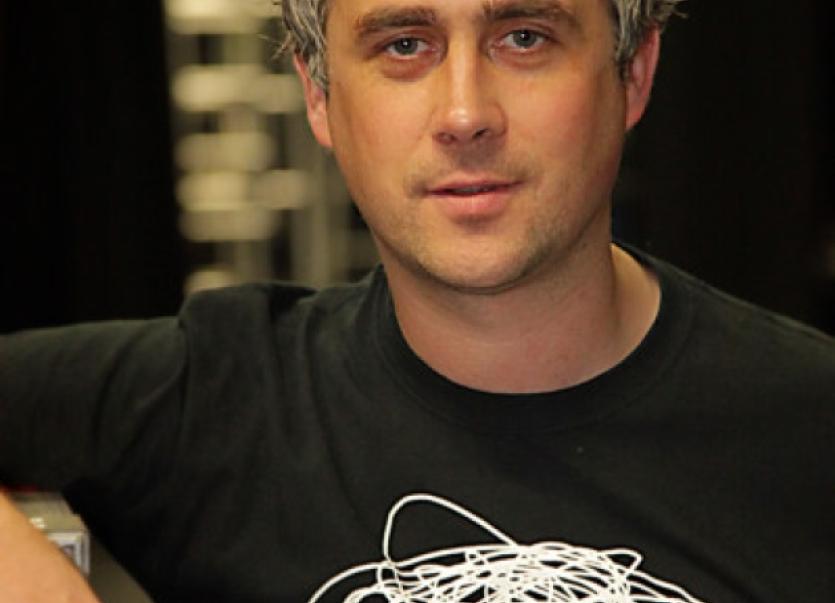 After growing-up in Birr, Co Offaly, I lived in quite a few places, including Galway, Cork, Edinburgh and Dublin.

After growing-up in Birr, Co Offaly, I lived in quite a few places, including Galway, Cork, Edinburgh and Dublin.

My initial schooling was in Offaly, before attending Art College in Galway. However, I ended-up deferring for two years. I was really young, and felt a little intimidated, and overwhelmed. I ended-up hiding out in the library a lot, and not committing to ideas I had about my practice. Thereafter, I ended-up going to University College Cork (UCC) to study Art History and English and later obtained an MA in Radio and Television Production from the National University of Ireland Maynooth (NUIM). Along the way, I have studied Theatre Production and Radio Production which is how I located to Limerick as manager of Wired FM.

I have been with the latter station for just over a year and this year we will celebrate our twentieth year of broadcasting.

The date of the first broadcast was 28 November, 1995. We celebrate our twentieth year of broadcast as part of LIT Music Week (29 February to 3 March, 2016). The bigger celebration comes in November 2016, however, when we celebrate our 21st Birthday party. This is pretty fitting for a student radio station. Initially, the dream was to be the next Dave Fanning, but that changed and I have produced a lot of arts content, including a visual arts series, and a long running current affairs programme. I have, even, kept the same music show since college, called ‘Left of the Dial’, which is on every Thursday night at 8pm.

While being in hospital frequently as a child, I got to listen to a lot of day time radio.

Indeed, I listened to Dave Fanning religiously growing-up, and I am still a fan. Amazingly, when I was studying at Maynooth, he invited me in to RTÉ. I got Goosebumps just sitting in the same room that was the source of so much of the music that I loved down the years. Dave was exactly as I had hoped. He was talkative, and unbelievably sound. I met Donal Dineen around the same time, and he was equally as charming. It was a particularly challenging time for him during his final weeks on Today FM. However, that last fortnight witnessed some of the most magical radio that I have personally ever heard. I liked Gerry Ryan too, but not as I grew older. His old producer from the time was one of my lecturers at Maynooth, and one of my favourites. John Herlihy at Radio Kerry was also very supportive of my  early career.

Never really thinking that I would end-up doing radio when I was younger, instead I always thought that it was something other people did.

It can be difficult to break into radio, but that’s why people should really avail of their student and local community stations. You need more than one form of media to grasp what is going on in the world, and student community media is all about giving greater expression to previously unheard voices. Practical and varied experience is the key. When you are starting-out, some people will tell you that there are no jobs in radio. I find that they are usually people working in the media themselves. So, I always tell students not to listen to that type of negativity, and instead to think: “Well, you’re working in radio, I’ll have your job!”

In my spare time I read lots of music related stuff.

For example, I like people like Chuck Klosterman, Greil Marcus, Jon Savage, the 33 1/3 series, and the two anthologies of Lester Bangs writing. In terms of musician’s autobiographies, Viv Albertine’s autobiography from last year was a real favourite, Patti Smith’s ‘Just Kids’ was incredible and John Lydon’s ‘No Irish, No Blacks, No Dogs’ was life changing. I am, also, a massive fan of Steve Earle, and I can’t wait to read his forthcoming memoir. On the musical side I am a punk fanatic, and also love alternative country like Townes Van Zandt, Guy Clark, Lucinda William and Jason Ringenberg. Being a huge Beach Boys fan, I have seen Brian Wilson over ten times.

Having caught the ‘travel bug’, I spent my entire first summer at UCC traveling around Italy while sleeping in a tent.

I wanted to experience first-hand what I had been studying throughout the year. I lived in the Netherlands the following summer, and spent yet another traveling around Eastern Europe. I prefer to spend long periods of time getting to know somewhere, just walking around, and often getting lost. Next summer, I am going on a trip that I have been planning for a long time. It will be a sort of a musical pilgrimage.

At Wired FM, I am really excited about a new project that we are running with ‘Craol’ (‘The Community Radio Forum of Ireland’) and ‘The Community Foundation for Ireland’.

This involves a course for those over fifty-five. Ten people will be trained and certified by Wired FM to make a minimum of one hour of advocacy-based programming on issues of concern to people in that age group. The programme will, then, be broadcast locally, and a piece of it will be used as part of a national series. This course is free of charge, so I am hoping that there will be a big  uptake!

Ray Burke is co-promoting ‘We Shall Overcome’, a celebration of music and culture for those affected by the recession, with The Limerick Writer’s Centre, at the Locke Bar, on October 4 at 3-7pm. For information email: ray.burke@mic.ul.ie You can, also, contact Dominic Taylor, Community Literature Officer of the LWC, at mobile: 087-2996409 and email:limerick-writerscentre@gmail.com