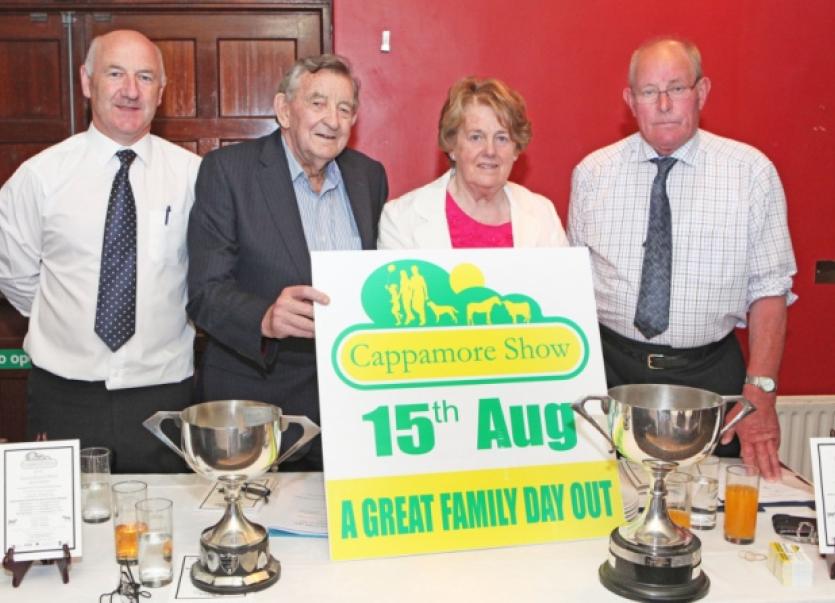 “THANK YOU for all embracing this remarkable journey,” said the president of Cappamore Show, Jimmy McCarthy, at the launch of its 61st event.

“THANK YOU for all embracing this remarkable journey,” said the president of Cappamore Show, Jimmy McCarthy, at the launch of its 61st event.

The sprightly 84-year-old is in the best position to say this, as he is the only continuous link by a serving committee member to their very first show.

Mr McCarthy was speaking in a packed Hayes’ function room last Wednesday evening – just under a month from show day on Saturday, August 15.

The Cappamore Show committee of over 120 is like a large family and he paid tribute to one of their members who has gone to his God.

“We are missing one very important person tonight – vice-president, Fr Liam Ryan. We offer our sympathies to his family. Fr Liam was an avid supporter of the show,” said Mr McCarthy.

Organisers aim to aim to build on last year’s tremendous success. Over 15,000 – up 3,000 on 2013 – headed to Portnard to enjoy a family day out full of entertainment, bumper entries in the horse and pony sections, arts and crafts, horticulture, baking, a huge assortment of stalls, vintage cars and tractors, the eternally young bullock called Charlie Browne and lots, lots more.

“I am sure it will continue to go from strength to strength,” said Mr McCarthy.

“It is a great occasion to see so many here. It shows the enthusiasm and interest over so many years. I thank our loyal and trusted sponsors and our new ones. The amount of income we need is huge,” said Mrs Hayes. That wasn’t always the case reflected Paddy Ryan “Luke”, who has been secretary for 56 of 61 shows.

“In 1954 it was held on the old showgrounds at the other end of the village on eight acres. It was held there until 2000. We moved to Bilboa and now Portnard which is referred to by many exhibitors as the finest showgrounds in the country. It is held on 40 acres – five times bigger than in 1954. It is an indication of how the show has flourished.

“In 1954, quite a lot of shows were launched by Muintir na Tire and Macra na Feirme. Some have gone by the wayside due to the lack of manpower and finances. It is a tribute to our sponsors, committee members and the goodwill of the local community. Those are the ingredients for success,” said Mr Ryan, who is a dedicated community man.

“I recently visited Kilteely, who are in the Pride of Place competition. It was a pleasure to see the flowers in bloom. Everything is in pristine condition. In rural Ireland everybody should have pride in their place. The best way to manifest that is to do something, take pride in their own place and give up their time. To achieve anything you have to make sacrifices. That is happening in Cappamore and long may it continue,” said Mr Ryan.

An enjoyable day spent at the show is the “greatest reward you can get” he says.

The man with the important of role of holding the purse strings is treasurer, PJ Blackwell.

“Holding an annual one-day event might seem like a simple task – you start in the morning and finish in the evening but 12 months go into it.

“The sponsors’ money and support is vital but so too is your moral support and encouragement. Everything is done for the betterment of the community and we will strive for another successful year,” said Mr Blackwell.