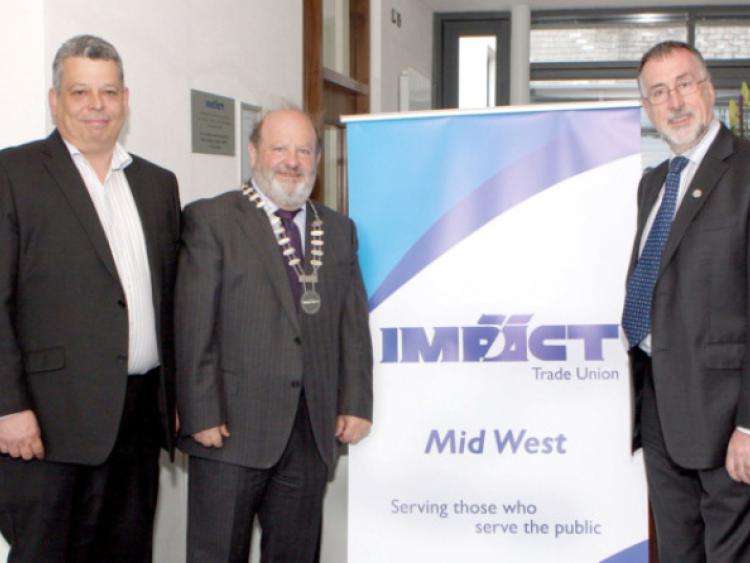 STAFF at Limerick City and County Council are to be balloted on industrial action with the atmosphere at the local authority described by a union official as “poisonous”.

STAFF at Limerick City and County Council are to be balloted on industrial action with the atmosphere at the local authority described by a union official as “poisonous”.

Impact, which represents over 500 staff from managers to all council grades, is to ballot its members, many of whom are furious over a lack of structure in the newly merged authority.

The union will next week be polling its members on whether to not co-operate with any further organisational change at the council, as well as a work-to-rule and potentially the non-answering of telephones.

He said: “We believe there is no overall vision, a process our members find very frustrating. The discontent is felt right across the departments.”

As a result of the joining up of City and County Council, many staff have moved from Dooradoyle to the city and vice-versa.

Jobs have been changed, but staff have not been properly briefed, Mr Pike says, adding: “It has descended into organisational chaos, where nobody knows what the future holds”.

A survey commissioned by the union also shows 76 out of 100 people surveyed feel management are “making things up as they go along with no overall strategy”.

Mr Pike said the merger has not been managed properly.

“Over the years, industrial relations in the City Council and the County Council were reasonably good. But morale is worse than low now. There is a poisonous atmosphere at the moment,” Mr Pike said.

It is understood the other unions representing council workers are watching Impact’s actions, with a view to taking a similar approach shortly.

The trade union commissioned a snap survey among its membership at City Hall and County Hall, and almost 100 people returned answers.

According to the survey, some 91 of the 97 people asked said the level of information given to them about changes after the merger was average, poor or very poor. Only six described the information as ‘very good’, with nobody suggesting it is excellent.

Sixty-two people surveyed suggested there was not adequate consultation on the changes.

A total of 71 people said staff briefings with the change management team were not considered to be helpful, with 83 people saying they do not feel their concerns were taken seriously by management at the council.

Of the 97 people who returned the survey, some 75 said they would support a the withdrawing of co-operation.

Mr Pike said the changes to roles are having a negative impact on the general public, citing changes to workflows.

“If you’re working on providing services to the public, and everything is changing, you don’t know if the customer you are dealing with will be able to access that service in the same way in the coming month. You are expected to know, but in reality, nobody has any idea,” he said.

He said between the summer of 2011 - when the merger was announced by former Local Government Minister Phil Hogan - up to the summer of 2013, there were no major problems. It was only as Limerick City Council and Limerick County Council entered its dying days the problems took hold, he added.

In a statement, a spokesperson for Limerick City and County Council said they regular meet with union officials and other staff representatives.

“Recently, the local authority successfully held staff workshops across the organisation of which approximately 1,100 staff were invited to attend. Answers to all queries asked at these workshops have been provided to staff, and workshops are planned throughout 2015 to keep employees informed.”

The spokesperson added the council appreciates “the massive contribution and commitment by staff to the change programme”.