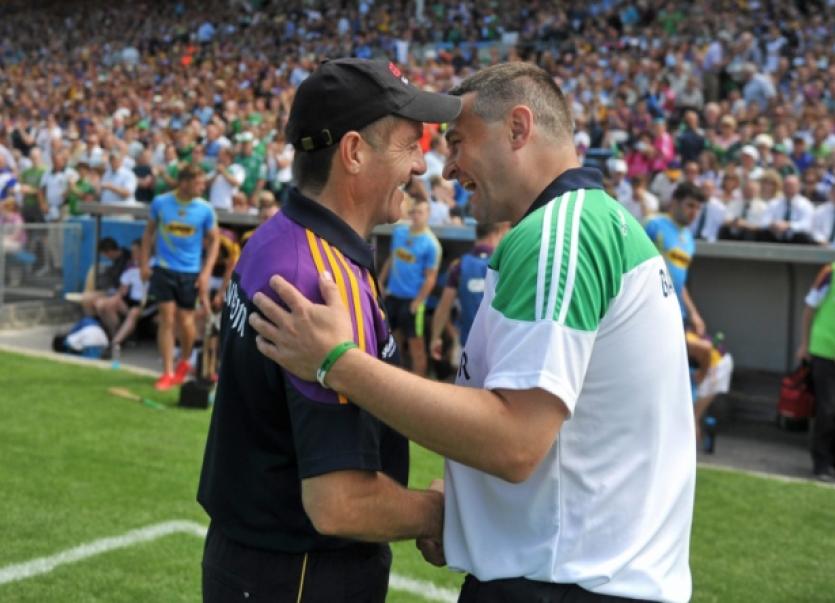 IN this week’s Limerick Leader column, Martin Kiely looks ahead to the league double-header between Limerick and Wexford.

IN this week’s Limerick Leader column, Martin Kiely looks ahead to the league double-header between Limerick and Wexford.

Limerick will make the journey to Wexford Park next Sunday for what could be a very important National League encounter.

They will face the home team who have always proved difficult to beat in this venue.

Limerick met Wexford in the championship last year in Thurles and they pulverised them on the day but this game won’t see the same sort of margin between the teams.

Wexford manager Liam Dunne has made his team more competitive since taking over and overall they are making progress.

Like Limerick they will want to return to Division 1A hurling and they will see this game as a major opportunity in laying the foundation for that promotion.

I have seen Wexford play many games on home soil and for some reason they make life very difficult for teams in this pitch.

I saw them play Dublin and Clare there in championship and they were not expected to win but a draw against Dublin and a win against Clare underlines how difficult it is to get a result in Wexford Park.

For a few years Wexford hurlers went back a fair degree and their footballers had stolen a march on them but since Dunne took over the great traditions of Wexford hurling are making a much needed return.

In their opening round game against Waterford most people expected Limerick to have the better of them but on the night it took them sometime to come to terms with what Waterford delivered on that Saturday evening.

They shared the points and that has made the remaining games in this league very interesting.

Limerick made no mistake when they travelled north and had the measure of Antrim whereas Wexford just about scraped over the line when they met Antrim in their opening round game.

Two weeks ago Wexford ended a 42-year gap when they beat Offaly away from home and from a long way out they would have put major focus on this game with Limerick.

One member of the Wexford backroom team told me this week that they won’t have any difficult driving the lads on for this meeting with Limerick.

“That day in Thurles still hurts a lot of our lads and they felt they left themselves down. Of course we went into that game after hurling five weeks in a row but outside of that the team felt they didn’t deliver what they are capable of.”

A win for Wexford on Sunday would put them in the driving seat for promotion as they also have Waterford at home.

Limerick is starting to get some more players back and they will be stronger going into this game.

The National League in the past offered the manager the opportunity to blood more players but now he must keep one eye on getting results.

However it happens this league is all about gaining promotion for Limerick, I think the longer term good of Limerick hurling depends on getting the major teams back to the Gaelic Grounds and this will stand to Limerick in the latter stages of the championship.

I expect Limerick to be much improved for this game with Wexford.

Those opening games are now out of the way and while they will respect Wexford this is a game Limerick will win.

In their game against Offaly Wexford created many goal chances but should have taken more than the two they converted.

Jack Guiney is a very impressive player and he will keep Richie McCarthy busy next Sunday. Wexford hit some terrible wides against Offaly and they will want to put that right against Limerick.

This game next Sunday will not have the same fluidity as the game last August in Thurles and that will suit Wexford, they will want to make this a battle and a low scoring affair.

Limerick has been really shy as far as goals so far in the league and that might want to change if they are to leave Wexford Park with both points next Sunday.

Not alone have they not scored goals but they also haven’t created too many chances either in the Waterford Crystal league or the National League.

Wexford supporters will rally the team next Sunday and they have a habit of turning out in big numbers for games in Wexford Park and for that reason Limerick will need to hit the ground running for this game.

If Wexford get a foot hold on the game they might prove very difficult to beat.

This is a pressure game for Limerick but one I feel they are well capable of winning.

Scoring difference could also play a part on who gains promotion and from now on Limerick not only need to win games but they also need to punish teams whenever possible.

It now looks certain that they will be heading back to Division 4 and that won’t aid the development of players.

Some players have pulled out and I hear this week that they will also be without Ger Collins for the rest of the year. The Monaleen man will be a huge loss to Limerick but he has given huge dedication to his county and was a key member of the forward line.

Limerick is falling behind others in Munster and let’s hope they can find form for the rest of the league and ultimately the championship.

They play Wexford as part of a double header next Sunday and they also are going poorly as David Power now has to build a new team.