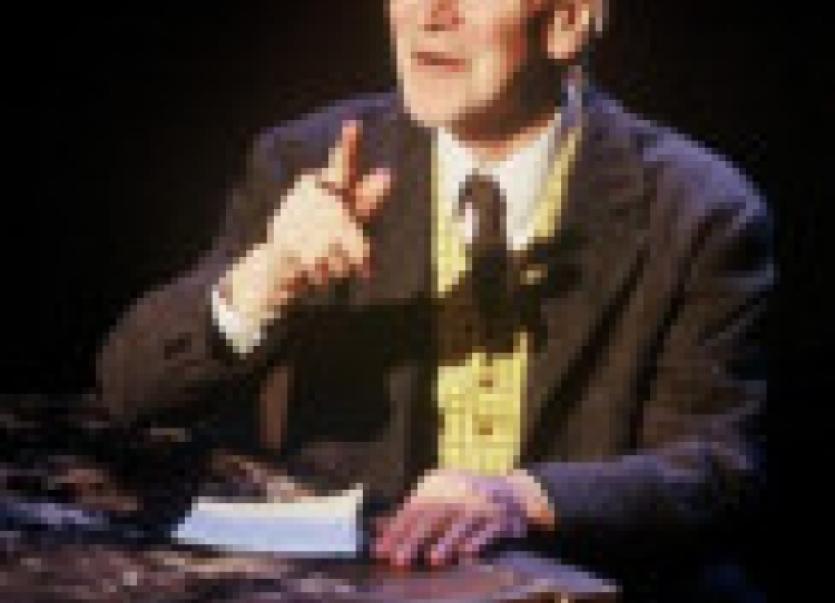 While my wife and I live in Dublin, my daughter now lives in Limerick.

While my wife and I live in Dublin, my daughter now lives in Limerick.

My wife is violinist Geraldine O’Grady, who has enjoyed an international solo career as a classical player. My daughter is the violinist Oonagh Keogh. She is a member of The Irish Chamber Orchestra and tours internationally with them. Oonagh has two children, Ruadhan (14) and Aoibhin (12), both are talented musicians. I was educated at Glenstal Abbey School, University College Dublin (UCD) and King’s Inns. I took part in many productions, both at school and at College, over the years and am a full-time professional actor today.

Although, I have never regretted it, I could do with the pension that I would have earned today from Guinness’s. There was no acting in my family, however, I always felt that I would never be happy or fulfilled doing anything else. Today, I only appear occasionally with my wife and daughter in concert. My main activity is acting. I will shortly be launching a new one-man show entitled My Fair Ladies, in which I will be portraying the character of George Bernard Shaw and lifting the lid on the ladies in his life. Celebrating my 80th birthday this year, I am fulfilling a life-long ambition to play this legendary Irish man of letters. Author of Pygmalion, which became the smash-hit film, My Fair Lady, Shaw shares anecdotes about the loves of his life, including many leading actresses of his day, for example Mrs Pat Campbell and Ellen Terry. He also elaborates on his forthright views about marriage and celibacy.

To date most of my acting has been primarily in the field of comedy.

By now, I have acted on stage all over Ireland, and internationally, for over fifty years. I, particularly, enjoy adapting the works of great writers to the stage, such as John B. Keane’s Confessions of an Irish Publican. A regular at the Gate and Abbey Theatres, my most recent performance was a US tour with the Gate Theatre’s production of Endgame, by Samuel Beckett. Before my new tour of John B. Keane’s The Love-Hungry Farmer, I will play King Lear, in a workshop production in Kilmallock, in advance of the full production, sometime later. I will follow this tour by appearing in Oscar Wilde’s A Woman of No Importance at the Gate. Recently, in the USA, I played the title role in Da, by Hugh Leonard, at the Olney Theatre Centre for the Arts in Olney, Maryland. I, also, played Uncle Peter in The Plough and the Stars at the Annenberg Centre, in Philadelphia.

My lifelong theatrical relationship has been with the acclaimed actress Rosaleen Linehan.

Indeed, our two-person comedy shows have been amongst the biggest box-office attractions in Ireland since the 1970s. In the year 2000, we were both overjoyed to receive the Lord Mayor’s Award for our ‘outstanding contribution to the cultural life of the City of Dublin’. I have recorded an album entitled Des and Rosie Alive while my wife, Geraldine O’Grady, has, also, completed albums such as Heartstrings in Harmony with Oonagh Keogh, accompanied on the piano by Margaret O’Sullivan, The Lark in the Clear Air, also with Margaret O’Sullivan, and My Favourite Irish Melodies, accompanied by Eily O’Grady.

My Fair Ladies, my new play, will be directed, as well as produced, by Pat Talbot.

Pat and I, have a long relationship, going back to when he was the Director/CEO of the Everyman Theatre in Cork. When I first took The Love-Hungry Farmer to the Everyman, in 2003, we had an extraordinary week, with capacity business. So much so, that Pat brought the show back to Cork on three other occasions. When Pat stepped down from the Everyman, in 2011, it coincided with me wanting to find a producer to take over the business side of The Love-Hungry Farmer, and Pat was the natural choice for this. Under his management we did two hugely successful seasons at the Gaiety Theatre in Dublin, in 2013, as well as a week at the newly refurbished Lyric Theatre in Belfast.

Pat is, also, a busy director and adaptor, and he is enjoying great success currently with his adaptation of a selection of stories by Frank O Connor, entitled God Bless the Child. It will play the Gaiety Theatre, in Dublin, over Easter and Lime Tree Theatre, in Limerick, at the end of April.

I am greatly looking forward to working with him, in the rehearsal room, as it represents a whole new strand to our working relationship.

We should never encourage people to be musicians or actors, per se.

The process of becoming an actor is a very personal, subjective decision and it is never easy.

Over time, being an actor, has led me to many different parts of the world. For example, my most recent one-man show The Love- Hungry Farmer has been all over Ireland before setting off for the UK, USA and Australia. I have, also, just completed two sell-out runs of the acclaimed revival of Moll, by the same author, at the Gaiety Theatre, Dublin. Previously, in 2014, I appeared in a world première production of Dreamland by Jim Nolan, for which I was recently nominated for an Irish Times Theatre Award!

The Keogh family will perform at Friars’ Gate Theatre, in Kilmallock, with Margaret O’Sullivan on Friday, March 13. For bookings please call: 063-98727 or visit the website: www.friarsgate.ie My Fair Ladies will be touring nationwide during April, May and June.