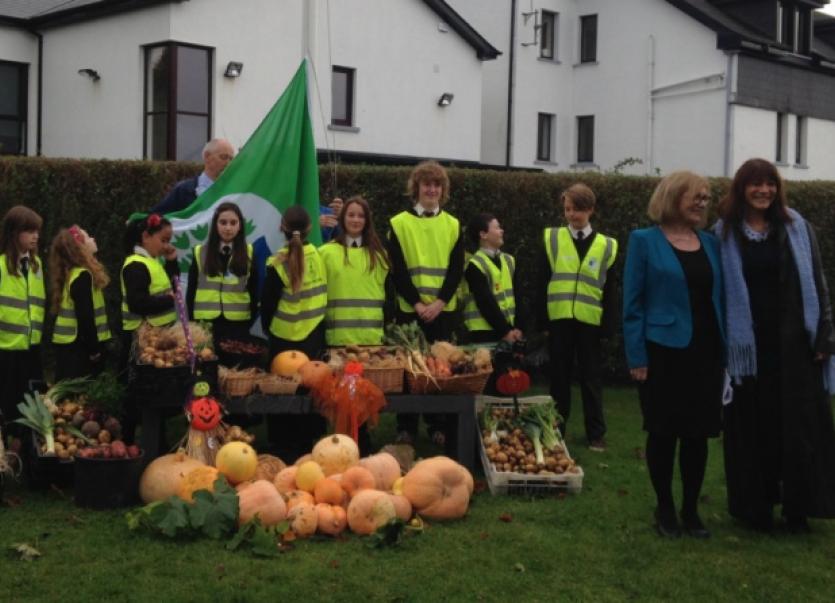 THE principal of one of Limerick’s best known national schools has warned, that they would not be able to run the school without funding from parents.

THE principal of one of Limerick’s best known national schools has warned, that they would not be able to run the school without funding from parents.

“It has become more and more difficult. We wouldn’t be able to resource the school on this money without a lot of support from the parents’ fund-raising efforts,” Kathryn O’Mahony, of Milford National School, said during a recent visit by Minister for Education, Jan O’Sullivan

Since 2003, Milford School has been chosen for Green Flags for Energy Awareness, Water Conservation, Sustainable Travel, biodiversity and, most recently, a sixth Green Flag for Global Citizenship.

Since being awarded its first Green Flag in May 2003, Milford NS has led the way in environmental awareness throughout the last decade with Minister O’Sullivan recently raising the school’s sixth Green Flag.

In welcoming the minister, school principal Kathryn O’Mahony expressed her delight that Limerick has its own Minister for Education, but used the opportunity to express her concerns for Irish education to the Limerick deputy.

Ms O’Mahony raised issues regarding day-to-day running costs, capital funding, Special Needs allocations and standardised testing. “Once again in this budget the capitation grant has been cut,” said Ms O’Mahony, adding that primary schools in this country are being run on 93c per child per day - or 46c spread over 365 days.

She added: “On this amount of money we are supposed to pay for heating, electricity, phone bills, water charges, stationery, computer expenses, including ink, broadband etc – these are only a few of the bills we have to pay.

“The minor works grant, which would allow us to replace carpets, re-do floors, replace furniture etc. has been abolished. Add to this the fact that we give a lot of that capitation grant back in taxes, over €2,000 in water charges, no reimbursement of Vat etc.

“It has become more and more difficult. We wouldn’t be able to resource the school on this money without a lot of support from the parents’ fund-raising efforts,” said Ms O’Mahony, citing the continued expense of the school gym built without departmental funding.

Milford NS pupil Environmental Committee member Róisín D’Arcy, Mark Collins and teacher/Green Schools Co-ordinator Denis O’Connor welcomed the Minister, and said that the pupils have become more aware of reducing waste and are developing a greater sense of global citizenship as a result of receiving their Sixth Green Schools Flag.

“Our 12 members do monthly spot checks and we have reduced waste in our school by half. We have WOW days where we have places to meet up to walk to school together.The environmental committee takes a survey of how we travelled to school on those days,” said Róisín.

She added that pupils work conscientiously in Milford to maintain their previous five Green Flags including the acts of litter wardens cleaning the yard each day, a class waste and energy and water monitor.

Visits from environmentalist Geoff Hunt, maintaining class bird feeders, planting vegetables in the school garden and maintaining the wildlife area, were also part of their programme.