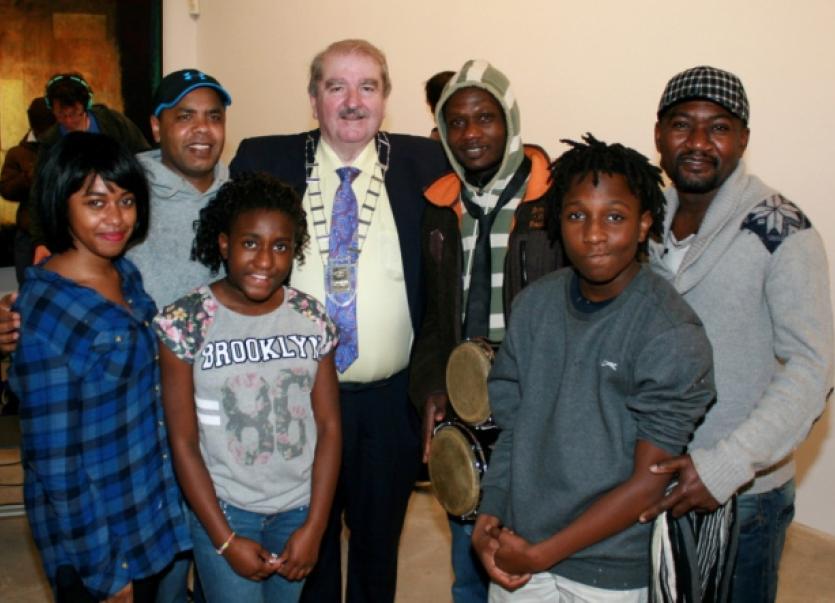 THE SILENT hatred – the eerie quietness that racism can bring – hurts more than any verbal or physical assault, says Munya Jonas.

THE SILENT hatred – the eerie quietness that racism can bring – hurts more than any verbal or physical assault, says Munya Jonas.

The 24-year-old moved to Ireland from Zimbabwe when he turned 11. Last Thursday, he, along with a number of his friends, made their way to Limerick City Gallery of Art on Pery Square in the city to celebrate Limerick’s new Irish citizens at a ceremony hosted by Doras Luimni.

Munya lives in Shannon but spends most of his days in Limerick city. He is a youth worker with Music Generation, which nurtures the careers of musicians and empowers the musical life of communities through workshops in different schools.

“Limerick is amazing. It’s a good city with good people,” says the rapper. “I would consider myself Irish – yeah, I’m Irish, man. I’m Henry Street all day long,” he smiles.

Since his arrival in Ireland, Munya has, he says, experienced ignorance more than racism.

“Racism is one part of what ignorance can be – it can lead to bitterness and hatred. Yes, I have experienced racism but I would say most of the time I would put it down to people being ignorant.

“I’ve experienced name calling and silence – an eerie silence. There is a silent hatred as well. It can be terrible – the silence actually hurts me more than people pointing it out.”

Last Thursday evening’s event however, was about celebrating the positive attitude of Limerick when it comes to embracing its new Irish citizens. “It’s also an opportunity to say thank you to Limerick city and county for all their support of Doras Luimni and all the work that we do here - it’s really a positive celebration,” said Karen McHugh, CEO, Doras Luimni.

An average of 10% of the population in Limerick is from a migrant background. Doras Luimni deals with about 1,200 migrants a year, at least.

There are many challenges in the work that Doras Luimni does with vulnerable migrants particularly in terms of trafficking, asylum issues and racism.

“There is every kind of an incident,” Karen says of the racist attacks in the city and county – “spitting, name calling, threats, intimidation, and physical damage - lots. They are quite diverse the issues - being treated differently in employment, exploitation issues - there would be wide, wide issues.”

Racism, Karen says, is a global issue but also a local issue. “Limerick has no more of a problem than anywhere else but it is an issue that people face on a daily basis.”

This year, in particular, Karen says, they have been “snowed under” with support from the wider Limerick community.

“We want to thank Limerick for supporting us and believing in us. I think there have been lots of improvements in the last year in particular. Societies that are diverse are better societies.”

Mwaka Chaila moved to Ireland from Zambia 14 years ago. She considers herself Irish.

“Limerick is the most surprisingly artistic city in Ireland,” smiles the 21-year-old as she waits for the Mayor of Limerick City and County, Kevin Sheahan, to present certificates to those living in Limerick who have received their Irish citizenship recently.

Although she resides in Ardnacrusha, Mwaka, like Munya, spends much of her time in the city centre. “I love the vibe that is around here and how open people are. I feel I meet an artist around every corner. I just love the stories that people have to tell. There is definitely a very good mix of everything in the city.”

Mwaka also works with Music Generation – she sings neo soul and performs spoken word. When she first moved to Ireland she says she got “a lot of looks”.

“There was the ‘Oh my God, look at that girl, she’s new, definitely new, definitely new’ – but it was an innocent curiosity that opens doors for conservation. I’m pretty sure that there have been some encounters I have come across where I have thought that’s definitely not kosher but I suppose it’s that way anywhere you go – you are not going to find 100% good, intelligent ‘there’ people but it’s OK, the good outweighs the bad.

“I’ve always had good friends around to mediate a bad experience and turn it into a positive. Yeah, it happens, and yeah, people like that are out there, but I consider them with a lot of compassion and a little bit of sadness because you are missing out – the world is bigger than you!”

Mayor Kevin Sheahan said it was an honour to be invited to present certificates to those who received their Irish citizenship recently and made reference to how he was accused of being racist in the past.

“I raised an issue which was of concern to me and to many people – it was a housing issue. It wasn’t a racist issue – sometimes people can get their lines crossed in interpreting what people’s concerns are,” he said.

“If you listen to gossip, you can be forgiven for believing that maybe people who came into the country quite recently have jumped the queue and this is not true.”

“I would always be conscious of the fact that our missionaries, who travelled to countries where English was not spoken, were well received, appreciated, understood and accepted and we should remember this and avoid jumping to conclusions.”