Gardening: ‘This roadside delight is in full bloom’ 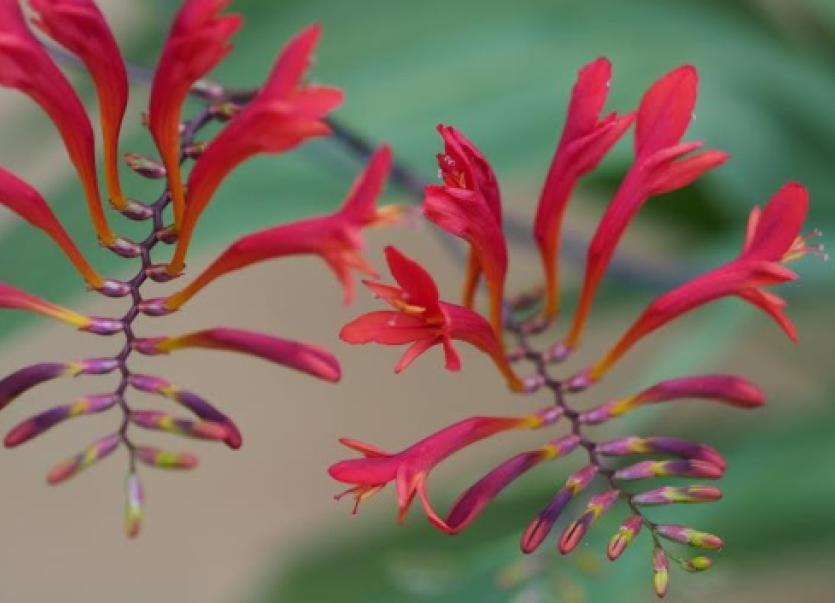 It is vigorous and has become naturalised in many parts of the country where it can be seen grown on banks, hedgerows and along the sides of the road. In late summer and autumn nothing beats crocosmia for long lasting colour in the garden.

The funnel shaped flowers are borne from July to September on stems 2 feet tall amid fans of sword like leaves. Over a century of breeding has produced hundreds of crocosmia cultivars, no late summer garden should without their warmth of colour in shades of yellow, orange and red. The foliage alone is an asset, the tufts of sword like leaves giving form to planting schemes and remaining fresh from spring to early autumn. One great performer is the hardy, vigorous Crocosmia ‘Emily McKenzie’ which has large, burnt orange trumpets streaked with mahogany, grows over 2 feet tall, is one of the best known bicolour flowers.

Alan Bloom has produced many new varieties in recent years, his greatest triumph was crocosmia ‘Lucifer’, produced in 1957, has intense flame red flowers in July. If you are looking for a yellow crocosmia, try ‘Solfatare’. Bred nearly 100 years ago its warm yellow flowers and complementary bronze leaves have found favour with gardeners ever since. Crocosmia ‘Sultan’ is a newer variety with similar coloured leaves and reddish blooms. The largest flowers are found on crocosmia ‘Star of the East’ whose star shaped apricot-orange flowers have six regular spaced petals. This is one of the last to flower and often flowers until October.

As a general rule the large flower varieties are the least frost hardy and require a thick mulch in the winter to protect them.

Crocosmia are cormous perennials which means they grow from corms that renew themselves by making new corms directly under the old ones. The new corms will produce next year’s shoots and flowers. When planted in a sunny position with plenty of drainage added to the soil, they will increase rapidly, making a dense clump that may soon become congested and suffer reduced flowering. In this case, the clumps should lifted and the corms separated out. Replant them, preferably in the autumn, as new shoots are too easily broken off in the spring.

You can achieve some head turning combinations by growing red crocosmia with yellow lilies or white daisies. In a long border repeat a few clumps of crocosmia to keep the eye moving through the bed. To echo the vertical effect plant some ornamental grasses. Another pleasing partner to try with crocosmia foliage is the soft silvery lamb’s ear or artemisia. They both appreciate the same conditions, well drained soil and full sun. Although crocosmia like the sun, they will also grow in partial shade. Crocosmia also grows well in containers, which is especially helpful to gardeners living in cooler areas. The plants can be started indoors and then moved out to the deck or patio or placed in the garden as the weather warms up.

Rudbeckias are late-flowering herbaceous plants that range in height from 18 inches to 6 feet. Some varieties can become invasive and spread through the herbaceous border.

They produce large yellow or orange daisy-like flowers with dark centres, the flowers can be 6 inches wide. They flower from late summer to mid autumn. They will grow in any moderately fertile soil that does not dry out. Rudbeckia fulgida grows 3 feet tall producing an orange-yellow flower. Rudbeckia hirta ‘Becky Mixed’ is a dwarf plant that grows 10 inches tall and produces flowers in shades of yellow, orange and red.

Apply an autumn fertiliser to give the lawn a boost before winter starts. This fertiliser is high in phosphates and potash and low in nitrogen. This will encourage strong roots to develop and is the key to a great looking lawn next spring. Now is a good time to sow a new lawn.

Houseplants that were placed outside for the summer should be brought indoors or into the greenhouse before the weather gets too cold and wet.