Martin Kiely Column - The Bally boys are back! 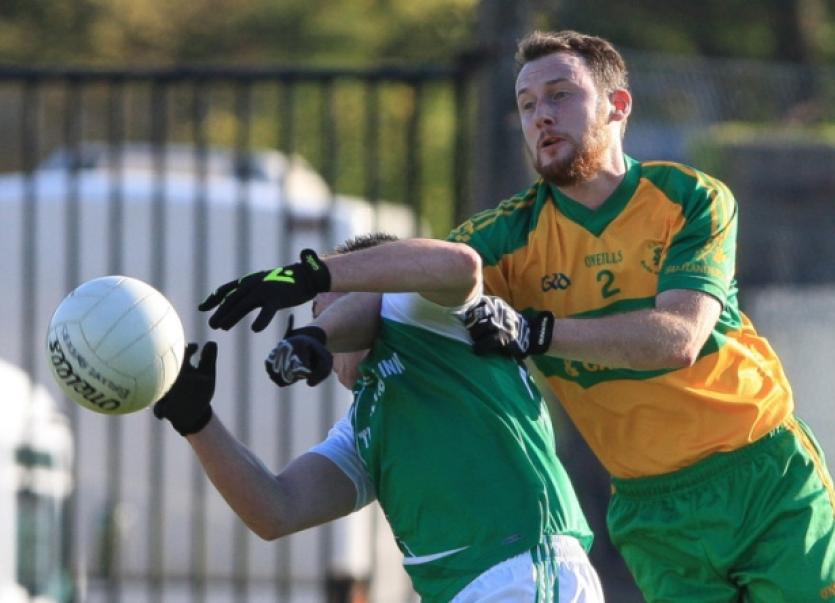 In this week’s Limerick Leader column, Martin Kiely pays tribute to the Ballylanders footballers on their county final success.

In this week’s Limerick Leader column, Martin Kiely pays tribute to the Ballylanders footballers on their county final success.

The browning of the winter leaves provided the backdrop for last Sunday’s Limerick senior football final in Newcastle West.

It was a day borrowed from summer as one of the biggest crowds for some time turned up to witness the battle between Ballylanders and St Patrick’s. Supporters turned up in short sleeves, the sun was high in the sky and long before a ball was kicked the atmosphere was pretty special. The decision to play this game in the West was well founded and I think very few could complain with the presentation.

The host club Newcastle West put in a massive effort and field caretaker Paddy McCoy had the pitch in superb condition. Neither of these teams would have been seen as front runners at the start of the championship but with every kick both improved to make the decider. Long before you reached the grounds Newcastle West was buzzing with supporters young and old walking through the town and that helped in building a party atmosphere.

In recent weeks I wrote how playing such games outside the Gaelic Grounds would encourage more people to attend and this was the case last Sunday and I think it would be the same next Sunday if the senior hurling final was played out the county.

This county final will be remembered for some fine spells of football but also the summer like conditions in which it was played. It was like a day in July and that with outstanding underfoot conditions laid the foundation for this final.

I got the sense from the warm up that Ballylanders were in a far more comfortable place than St Patrick’s. They had the experience of doing it all before and that allows the mind focus on what’s really important. Ballylanders at the start of the year were in a bad place and the prospect of them reaching the county final would not have registered in the minds of players or officials.

Jimmy Barry Murphy told us in his speech that at the first training session they had nine, the second they had seven. They then played a match and lost by 30 points. Those statistics didn’t suggest that they had any hope of reaching the County final. Few were rushing to manage or train this team but a call to Cork man Ephie Fitzgerald was the start of a new dawn for Ballylanders. Fitzgerald came to the South Limerick club with a very impressive CV and to his credit he performed a bit of magic to see this famous club enter the winner’s enclosure once more.

Ballylanders is one of those rural towns that hasn’t lost its fabric. Football and the GAA are part of the everyday diet and when the final whistle sounded we saw tears of pride and joy shed.

Winning something when least expected to do so is very satisfying and while they might not admit it I got the feeling last Sunday’s win might rank as one the most pleasing for the club.

The man most players and supporters surrounded at the end of the game was Johnny Murphy.

Was it because he had the best game of his life? No, it was instead about embracing him for the service and commitment he has given to the club. Murphy is not one for getting carried away but by showing emotion you knew that winning this title meant a huge amount to him. It was a special day for the Murphy family, Jimmy was captain and deep down they would be remembering their father Seamus. Indeed Jimmy said in his speech the win was dedicated to Ann Hickey, Noel Martin and his father all who had passed away.

As finals go this was a close and very well contested game, St Patrick’s may well look back and rue the missed chances they had in the opening minutes. The best of those chances fell to young Gearoid Hegarty. This tall and ever improving player was denied by the narrowest of margins, he did everything right and executed with the outside of the right boot but only a coat of paint making the difference surely.

It took a while for the game to really open up but when it did we had some fine scores from both teams. Ballylanders acquired their scores with greater ease and when James Kirby scored the opening goal just after 20 minutes it was to prove crucial. Ballylanders were in control and could well have been further ahead at the break had they moved the ball with a bit more pace to their forwards.

St Patrick’s were finding it hard to score, they sat back and allowed Ballylanders build from deep and when they did win possession they all too often made poor decisions. Games always provide opportunities for teams to recover and for St Patrick’s it arrived in the opening ten minutes. They worked their way into the game but in that period they only scored two points. They would manage only one more over the course of the next 20 minutes and a goal in injury time. St Patrick’s could not be faulted for effort but they never coped with the game plan adopted by Ballylanders.

Danny Frewen was moving well for the majority of this game and when he flashed a ball to the net in the second half it halted any hope of a St Patrick’s comeback. Many of the St Patrick’s players never got into the game and they were dependent on Eoin Hanrahan to get scores.

They will have learned a great deal from this game. They are a great club doing superb work both on and off the field. 1954 was the last time they won the football championship but with great work being done on the ground they will be back.

Ballylanders GAA club is in a very good place at the moment and under new chairman Eammon O’Neill they have bold and ambitious plans for the future. “Building for the future” is the club motto and the development of a new complex is a major step forward.

O’Neill and his committee have taken a major step forward and winning last Sunday was a huge boost in the further advancement of those plans.

This time last year Bill Fox was very ill but it was great to see him back on the sideline last Sunday. The club and players were delighted to have him back looking well and fit. The Bally boys are back but did they ever go away?