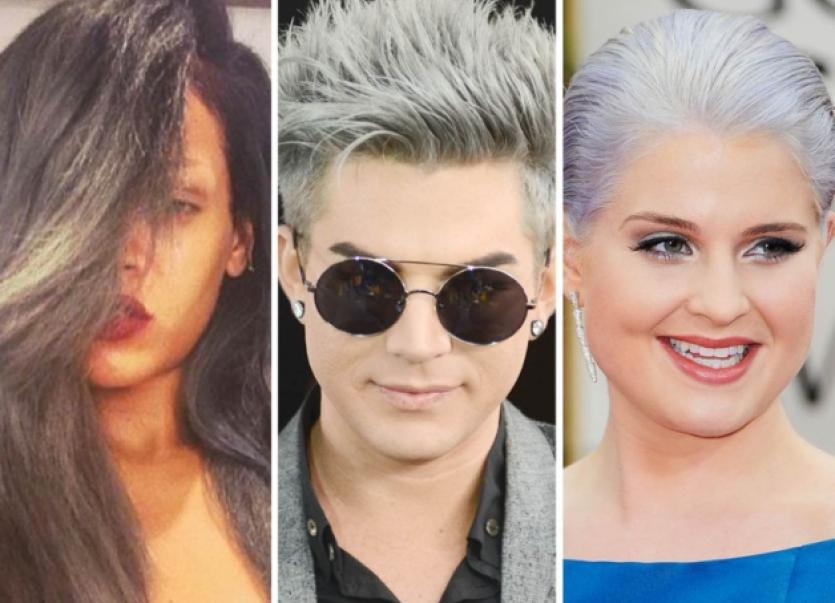 THIS is absolutely ridiculous! Here we are living in Tir na nOg, where to be young must be very heaven and to be old is just a pain in the butt. And what do you think the more fashionable members of the trendy young set are now sporting? Grey hair, if you don’t mind.

THIS is absolutely ridiculous! Here we are living in Tir na nOg, where to be young must be very heaven and to be old is just a pain in the butt. And what do you think the more fashionable members of the trendy young set are now sporting? Grey hair, if you don’t mind.

Grey is the new ‘to die for’ hair colour. It goes with all complexions, we’re told – unless, like me, you sometimes have to smooth out your face with dabs of cement.

Surely this grey top mania is not a parody. Political correctness would hardly tolerate that. It can’t be a gesture of solidarity either, because obviously there are better ways of showing solidarity with old age than by dyeing your hair the same colour as your elders. That won’t make them feel any better about their lost youth. How about increasing the pension instead? Maybe, on the other hand, it’s some kind of a self defence mechanism for dealing with the inevitability of ageing. Then again, maybe it’s just another fad.

Whatever it is, I can’t believe that young women are paying good money for premature silvery grey locks that the rest of us are desperately trying to hide. It’s not entirely new of course. When I was a teenager I decided I’d become a platinum blond as soon as I could afford a bottle of peroxide. But I changed my mind when I heard about dumb blonds.

The really maddening thing about turning grey, however, is that grey hair looks great on men. It certainly works on George Clooney. It gives men an attraction and an air of distinction that few women acquire with the advent of greyness. The wonder though, is why so many men are now dyeing their hair as soon as the first grey tinges appear. Someone should tell them that they’re wasting their time. Grey is no longer a state of mind. It has become the signature hair colour of youthful exuberance.

It wasn’t always so. The first time I found a grey hair on my own head, 35 or so years ago, instead of going straight for a bottle of dye, I went straight into denial. That period lasted for at least five years, after which time the grey rib had increased and multiplied to such an extent that I could no longer ignore it. Instead of accepting it gracefully, I attacked my fading tresses with anything at all, natural or unnatural, that promised to ‘banish all traces of grey’ and make me feel justified in lying about my age. Naturally, I never got to the root of the problem. I blamed work stress, of course, thinking that if I had stayed in that nice secure office job I’d never have gone grey in the first place.

Now that grey hair or silver hair is the height of fashion, I’m at a bit of a loss. I don’t know whether to go with the flow or continue fighting it. Some of my more sophisticated friends have already given in to nature especially now that grey is the epitome of glamour. It looks particularly great, I’m told, if you’re young and carefree and sport a dramatic cropped and sculptured hair style. Pony tails and up styles also look good in grey, but a granny bun is out, proving, if proof were needed, that this is not the same thing at all as the lamentable loss of pigment when hair follicles stop producing melanin.

The craze started in Hollywood, and, despite my suspicions about the effects of work stress, it has nothing at all to do with the impact of austerity on frantic follicles. Silver locks are simply cool, and if they have to be acquired artificially, then so be it. You certainly can no longer rely on a big fright to have your hair turn white overnight, of its own accord, as happened to an ancestor of mine in his 20’s – after experiencing an apparition.

The new trend actually caught me on the hop. I had just poured a bottle of dark lotion over my own salt and pepper locks in a vain – and I mean vain – attempt to halt the perception of the ageing process, when I heard about it. At first I didn’t believe it. A sop to Helen Mirren, I said to myself.

Then everywhere I went, I found myself surrounded by 50 shades of grey (hair) on young women half my age. Some had a hint of lavender which reminded me of the blue rinsed women of my own youth that we all swore we’d never become. The only problem, from my perspective anyway, is that I can’t start copying them now having denied my greying for so long. Typical, isn’t it? Just when I think I’ve caught up with fashion, it slips from my grasp and leaves me looking - as they derisively say in the trade - ‘so last season’. My darkened locks were dated before they had even  dried out.

Maybe I should just stop fretting about trends and face up to the reality that I’m now too old for grey hair.