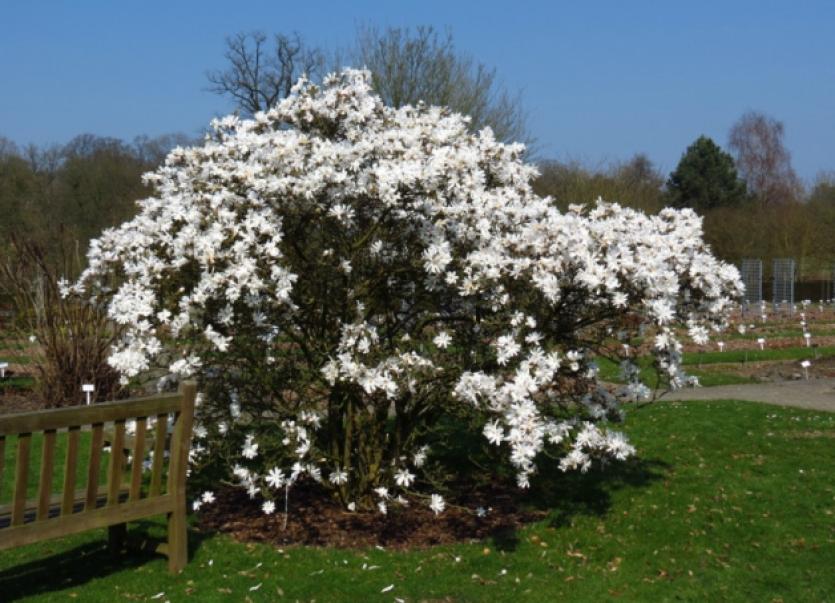 A magnolia in full flower is one of the most striking sights in the garden at this time of the year. There is a magnolia to suit every garden, no matter what size the garden is.

A magnolia in full flower is one of the most striking sights in the garden at this time of the year. There is a magnolia to suit every garden, no matter what size the garden is.

Magnolias, like pieris, rhododendrons and camellias need an acid soil so they grow well in the East and West of the county. A trip to your local garden centre will quickly reveal the great number of varieties available. The best time to plant magnolias is April into early May so that the new plant has the advantage of a full season of growth to establish itself before winter sets in. When magnolias were introduced into England in the 1700’s they caused an immediate sensation with their large flowers on bare stems in spring.

Magnolia stellata is a variety suitable for the small garden. It is a low growing variety that covers itself in star-shaped pure white flowers in spring. There are several named varieties of magnolia stellata available with a pink tinge on the flowers. The best known and most widely grown magnolia is magnolia x soulangeana. This produces large white and pink tulip shaped flowers. It can make quite a substantial tree, growing up to 20 feet tall with a similar spread. Magnolia ‘Galaxy’ is a large variety that can grow up to 40 feet tall, producing large purple-pink flowers. Magnolia liliiflora ‘Nigra’ is a slow growing variety that produces large crocus-shaped flowers from June to July.

Magnolias may take a number of years to flower, plants are normally ten years old before they flower profusely. Magnolias grow extremely well on acid or lime free soil but will tolerate neutral to limy conditions if plenty of organic is added and also if the soil is not prone to drying out. It is important to prepare the soil well in advance of planting.

Add well rotted farmyard manure or garden compost in large quantity, thoroughly mixing it through the soil. Because they flower in spring when the danger of frost is present, magnolias like a position that is sheltered from cold eastern winds and shelter from morning sun which will burn the flowers in frosty weather. In the first year it is essential to water your new tree on a regular basis. If you have the space, a magnolia is a plant worth having and it will reward you year after year with beautiful flowers.

Since Easter we have planted out cabbage plants that were sown in the greenhouse, early in the year and hardened off. Cabbage likes a fertile, well-drained soil that has been enriched with well-rotted compost. If the soil is acidic, spread lime on the soil and dig it in. The two varieties of cabbage that we grow are ‘Greyhound’ and ‘Hispi’, these produce small pointed heads from June on. We have sown seeds of ‘Red Jewel’ which is a variety of cabbage that will produce large tightly packed heads of ruby-red leaves later in the year.

We have also planted out lettuce plants. Lettuces are one of the easiest vegetables to grow, they will grow in almost any soil. They are quick growing and if planted at regular intervals they will provide a succession of delicious plants for salads all summer long. They grow best in soil with plenty of compost added, water well after planting. The varieties that we grow are ‘Lollo Rossa’ produces frilled, deep-red coloured leaves, ‘Sonette’ is an iceberg variety with crispy, curled leaves and ‘All the Year Round’ is a butterhead variety with pale green leaves.

Now is the time to move and divide grasses and bamboos as they come into active growth. Remove pieces from the outside of the plant and replant them somewhere else.

Ferns can also be replanted as the new fronds appear.

Sow hardy annuals outside in the garden. Rake the soil well and sow the seeds in shallow trenches, do not plant them in straight lines.

Keep an eye out for slugs and snails, they love to eat the new emerging shoots of many plants such as hostas and delphiniums.