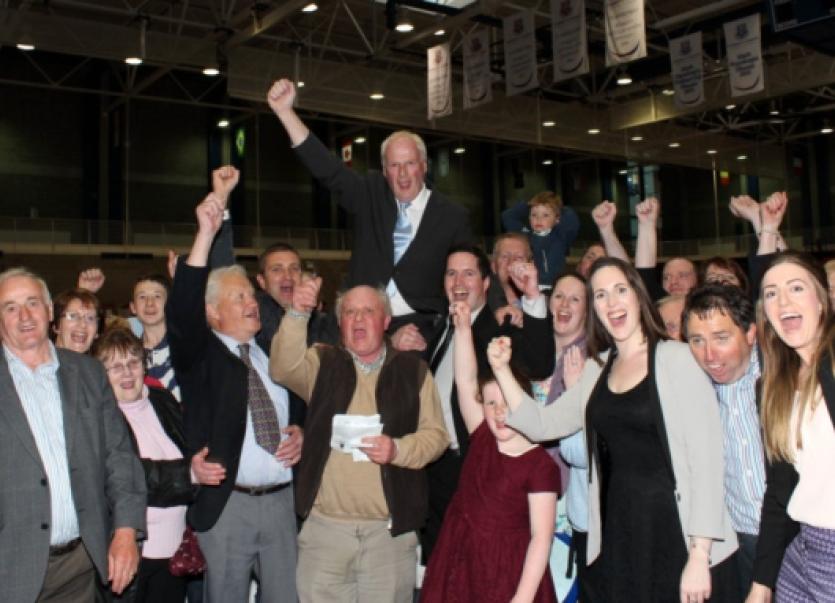 LESS than a week after Fianna Fail became the biggest party on the new local council in Limerick, a bitter split has emerged, with four sitting councillors resigning from the council group.

LESS than a week after Fianna Fail became the biggest party on the new local council in Limerick, a bitter split has emerged, with four sitting councillors resigning from the council group.

The new group, according to Cllr Ryan of Galbally, are calling themselves ‘Independent Fianna Fail’.

Both meetings, the Leader understands, were called on Tuesday.

In the meantime, according to Cllr Eddie Ryan, he learned that two of the Fianna Fail members, the leader of the group Cllr Michael Collins and the party whip, Cllr James Collins, met with the county secretary.

“I as deputy leader was not told about the meeting. The meeting had lasted two hours,” said Cllr Ryan.

The meeting, Cllr Ryan understands, was in relation to the council “going forward”.

“I was naturally disappointed to hear that two of my colleagues had met with management without including me in that mix. As I was deputy leader of the group, I was quite disappointed about it,” said Cllr Ryan, who added that he made his opinions known at yesterday morning’s meeting that he felt he “should have been in the mix”.

“The only word I got from them was it was a slight oversight on their part,” said Cllr Ryan.

Cllr Ryan said he made it known to the group that he was seeking the leadership role of the group and was putting his name forward.

“I felt it was a rite of passage and the way to do business and I don’t think anyone should be stuck in a job for 15 or 20 years.”

According to Cllr Ryan, Cllr Collins also indicated that he was going forward for the leader of the group.

“I felt, as a group, we should have reflected a lot on the election and I wanted plenty of discussion around the table and that we would not rush into electing a leader and we would meet the manager and discuss it again - where we are at and what we should do for the future of the party as we are now in a better place.”

Cllr Ryan says there was “a bullish enough approach to the whole thing in that they wanted an election and they wanted it now”.

“It wouldn’t be the first election I lost so I wasn’t particularly bothered in that regard,” said Cllr Ryan.

“I took the city to be the old city but the members there, and they were quite strong on it, wanted the new city boundary which consists of 21 members which goes from Boher to Patrickswell. I thought anything in relation to the city would have been Joe Crowley and Kieran O’Hanlon because they have grown the Fianna Fail leadership in the city and it is crucial to have them there because the party needs to develop membership within the city.”

A vote was taken with Cllr Collins securing nine votes and Cllr O’ Hanlon securing four votes “and with that Kieran got up and left the meeting.”

“He walked out. The meeting was proceeding when I suggested to the chairman, Michael Collins that he should go after him, which he did and he (O’Hanlon) wouldn’t come back. He said he was now out of it.”

The group including Cllr Ryan later met with the manager, Conn Murray.

When that meeting was over, according to Cllr Ryan, both he and Cllr Kevin Sheahan met with Cllr Kieran O’Hanlon and Joe Crowley in the lobby of the Maldron Hotel.

“We were now four. After a fair bit of discussion it was decided that we would join Kieran and be outside the Fianna Fail group from now on.”

“I informed Shane Clifford, as the party whip, last night that we were outside the group. He was quite stunned,” said Cllr Ryan.

“Bearing in mind that I have given 34 years service to Fianna Fail this wasn’t’ an easy thing to do. I had felt a little bit hard done - no question about that. I felt Kieran O’Hanlon was equally hard done and I felt there was no gap for consensus in the meeting room of the 13 people. There was a bullish attitude and an approach in that room that I didn’t particularly like and it’s not my way of doing business.

“I felt it wasn’t a good meeting. The way I and was treated and Kieran O’Hanlon was treated, I wasn’t happy with it,” said Cllr Ryan, who said he has had “no feedback from anyone since apart from the discussion with Shane Clifford”.

“I have worked hard to hold the party together in difficult times, in the last local election when I can assure you Fianna Fail were not welcome or wanted at doors,” said Cllr Ryan, who secured the highest Fianna Fail vote in the city and county in the 2009 election and secured 2,178 first preferences this time around.

It has also emerged this Friday that the ‘Independent Fianna Fail’ group met with Independent councillors Brigid Teefy, Emmet O’Brien and John Gilligan on Thursday evening.

“We met, we had a good meeting, a nice chat. We are still an alliance of four as they are a group of three,” said Cllr Ryan.

“It is a possibility that Fine Gael or Fianna Fail may wish to talk to us as group,” he added.

Cllr Ryan said that if Fianna Fail and Fine Gael are putting a group together they will now have 21 - a majority for the election of the cathaoirleach.

“However, in the city, they have nine - five and four and the other groups within the city have 12, so it’s not beyond the bounds of possibility that Fianna Fail and Fine Gael can’t be sure of putting a group together in the city to elect a mayor. It’s now outside of their control in the city as I see it.”

There was no response to phone calls when the Leader contacted Cllr Michael Collins and Cllr James Collins this Friday morning.