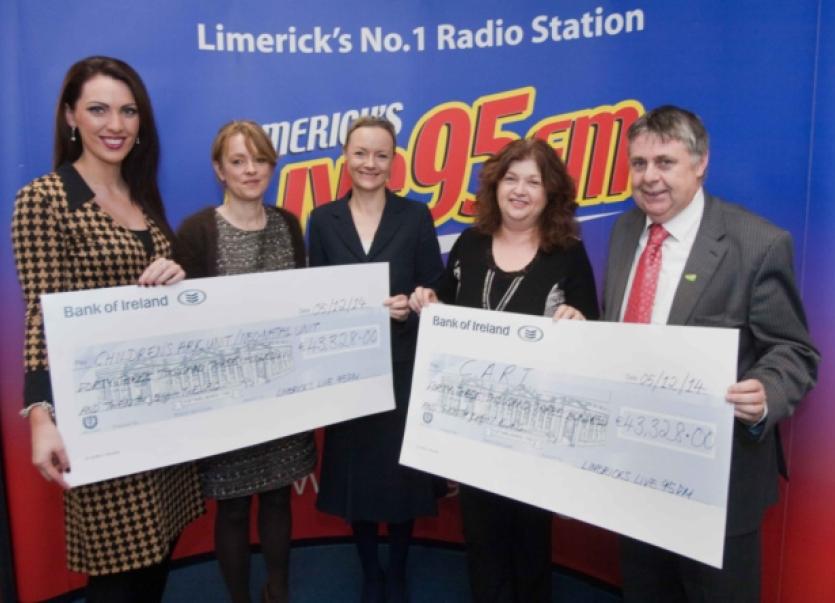 The radio’s annual charity fundraiser, the ‘95 Stop Tour’ raised the money for the Children’s Ark Unit at the University Hospital and CARI Limerick.

This is the fourth year of the fundraising tour and brings the total raised to over €320,000.

This year, under the umbrella of the Children’s Ark, the Neo-Natal Unit will also benefit from the station’s fundraising efforts.

“Limerick’s Live 95FM are delighted to be involved with these two fantastic charities and to have helped in raising vital funds again this year. We are overwhelmed by the support from the people of Limerick and would like to thank them again for their enormous generosity.

We simply would not have been able to raise this amount of money without them,” said Suzanne O’Brien, ’95 Stop Tour’ Coordinator.

The Live 95FM team embarked on a ‘95 Stop Tour’ of Limerick city and county in September visiting all the communities and organisations who helped to raise money for their chosen charities.

Communities, businesses and schools across Limerick held fundraising events that ranged from Coffee Mornings, Fun Cycles, Bingo Nights and Skipathons. The Limerick Today Show with Joe Nash broadcast live from five locations throughout the week of the tour.