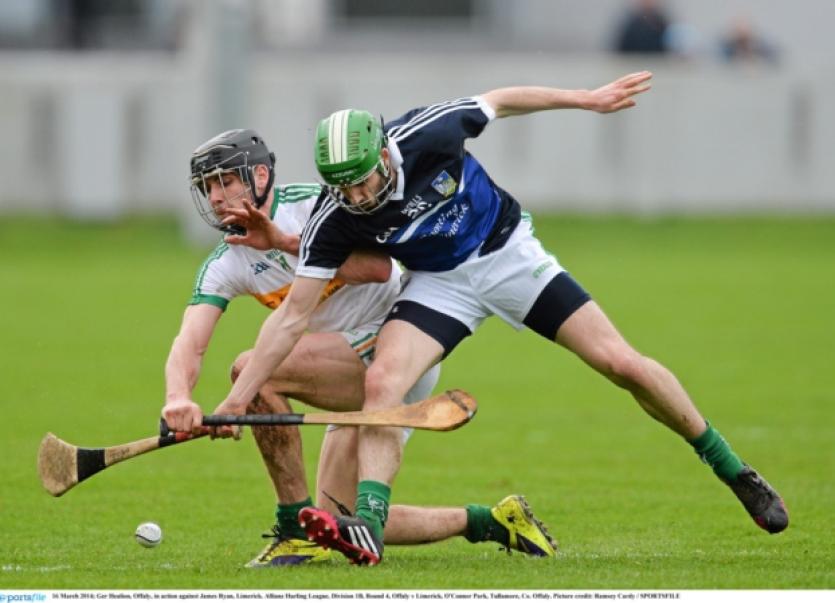 In this week’s Limerick Leader column, Martin Kiely looks back on Limerick’s draw with Offaly in the National Hurling League.

In this week’s Limerick Leader column, Martin Kiely looks back on Limerick’s draw with Offaly in the National Hurling League.

Limerick handed over control of their promotion to Division 1 hurling next year after they slipped up badly against Offaly in O’Connor Park in Tullamore last Sunday.

This was a poor game of hurling and for the best part it was sloppy and error ridden. Limerick had this game in the bag but once again against Offaly they fell away badly when the game should have been closed out.

Limerick led for the majority of the game but when it mattered most they lost focus and there are few better teams than Offaly to sense this. This was a poor performance and many on the field will reflect after this game because as a unit they were well below where many of them should be.

The pitch in O’Connor Park was ideal for hurling, the surface was solid and the grass was well cut but despite this both teams’ first touch was poor to say the least. Over the past number of years Offaly have always put it up to Limerick but the records will show that they had met 35 times in the National League with Limerick winning on 24 occasions. Limerick should have won again last Sunday and the draw result could yet prove to be very costly.

One could be forgiven for thinking at this stage that Limerick don’t want to return to top flight hurling because we were in such a great position going into this game and for so long it looked like we were well on our way back to playing at the highest level next year. Offaly had no points going into last Sunday’s game and most Limerick supporters held the view that they were well good enough to overcome a team that are clearly in a rebuilding stage under new manager Brian Whelehan.

The first half saw 14 scores recorded but of this only four came from play. All of Offaly’s scores came from frees while Conor Allis hit five from frees. Limerick enjoyed a lot of possession but our attack was poor and never once looked like scoring a goal and points from play were also in short supply.

Many Limerick players were finding it very hard to get into the game, they struggled to win possession and when they did they too often made poor choices. The Limerick defence, in particular the full back line, was slow to move the ball and we saw a fair bit of handball from them also when it would have been much better to deliver. Midfield struggled also and unlike other games they didn’t control matters and this allowed Offaly a foothold in the contest. Offaly could well have gone in leading at halftime had Joe Bergin’s penalty effort not hit the post, it was a rasping shot but they still finished the first half with the last two scores from Bergin.

Aaron Murphy was in goal for Limerick and he did well, he made a couple of good saves but his puck out added a new dimension as he managed to get huge length into them. I saw Murphy playing some games for LIT this year and he has to be seen as a serious contender.

After four games now in the League it’s safe to say that there are still places up for grabs in both defence and attack, I don’t think Limerick are in any way complete and some players are struggling and will continue to struggle to survive at this level. We have seen the progress that others are making and we need to follow suit.

Last year’s hurling, for all the talk about it, was well below what we have seen in past years and while the gap has narrowed between teams you get the early sense now that some order will be restored this year. With more than three quarters of the game gone Limerick were leading by five points, 1-13 to 0-11, Kevin Downes had started to come into the game and scored a fine point and made another for David Reidy. It looked like Limerick were safe but just as in the past Offaly came back, two points from Bergin and a goal from Dan Curran saw them lead for the first time in the game with seven minutes still to play.

As is so often the case when you score you are at your most vulnerable and Limerick went down the field and Graeme Mulcahy found the net for the second time, he followed with a point and when Paul Browne scored the points looked in the bag.

Limerick were four points up but you would have to admire the honesty of Offaly, they rallied and with some purpose they ran at Limerick and when the ball fell to young Peter Greathery he unleashed a superb effort that hung on the left corner of the net. Offaly were one behind and when seconds later Joe Bergin missed a free it looked certain that Limerick had done enough but Offaly were awarded a free in injury time and Bergin made no mistake this time to bring his tally to 12 points for the day.

Now Limerick can only go out and overcome Laois but the game between Wexford and Cork will decide everything.

We shouldn’t be in this situation and a cracking chance could be lost of making up for the heartbreak of years past in relation to promotion to Division 1 hurling.

It was very evident last Sunday that Donal O’Grady clung to the dugout but it also appeared he was coaching the coaches as they kept on going back to him.

We can only hope now that all will go well because a return to playing with the big boys is very important for the long term development.