An Taisce raises concerns over site for new Croom school 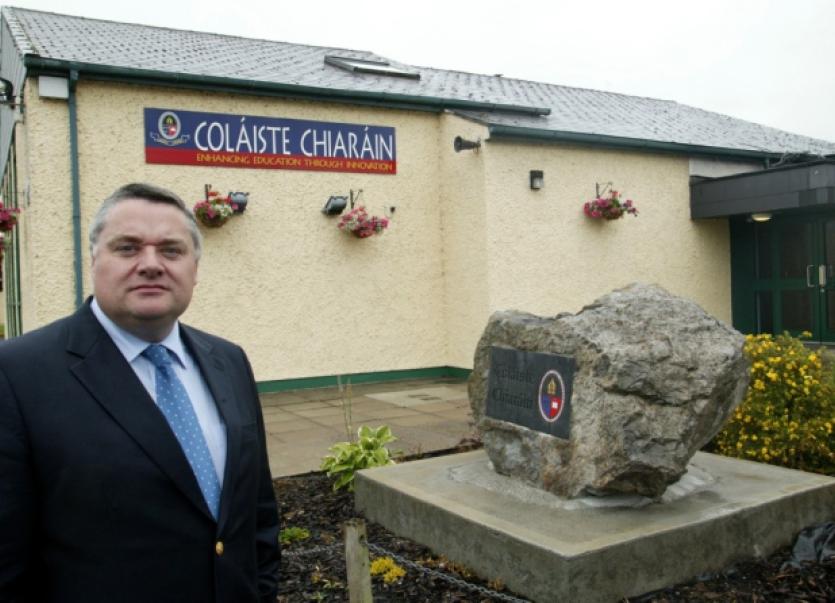 THE principal of Colaiste Chiarain in Croom says the selection of the site for a new secondary school in the town has not been done “willy-nilly”, in response to a statement by An Taisce that the planning proposal should be considered as “leapfrogging”.

THE principal of Colaiste Chiarain in Croom says the selection of the site for a new secondary school in the town has not been done “willy-nilly”, in response to a statement by An Taisce that the planning proposal should be considered as “leapfrogging”.

Noel Malone says he is “cautiously optimistic” that the new 1000-student school at Skagh, Croom will be given the green light by the local authority later this month.

In a report lodged with Limerick County Council in the past week, An Taisce - which acts as a national independent watchdog for the Irish planning system - states that to permit educational development on this unzoned site at present, particularly a school, “fails to maximise the utility of existing and future infrastructure and achieve sustainability and a logical sequential approach to the development of Croom”.

The An Taisce report further states that the development of these lands would be “contrary to the Development Plan Guidelines for Planning Authorities, June 2007, issued by the Department of the Environment, Heritage and Local Government and materially contravene the Limerick County Development Plan 2010-2016 which recommend that a logical sequential approach should be taken to the development of land, with lands closest to the core of towns and public transport routes being given preference”.

“Considering a logical sequential approach to development of zoned educational lands, a quantum of undeveloped lands is identified closest to the core, and public transport routes which should be given preference; this includes significant capacity adjacent to the existing school. Considering the quantum of educational zoned lands, this proposal should be considered ‘leapfrogging’,” they state in the report.

An Taisce also raises concerns that the applicant has not provided any evidence that the current school site is not suitable for the provision of the school.

According to Noel Malone however, a school of that size would not be appropriate at the current location even with excess land.

“It just wouldn’t work,” he said this Wednesday. “For a school of 1000, I don’t think that you could put a bottleneck in the middle of a fairly built-up area. The new site proposed is in the region of 20-something acres. I think that a school of our size will need that kind of growing space to give the facilities that we need and the opportunity for the young people.”

In relation to mobility management, An Taisce states that the current promotions and initiatives suggested by the transport consultant “amount to little more than an exercise in jargon and page-filling with no evidence provided as to how the final Target Modal Splits are arrived at”.

Mr Malone said a huge amount of time has been spent on selecting the current site which he feels will provide easier access in terms of transport.

“There has been a huge amount of time, and experts and hydrologists and archeologists and God knows what have examined both the new site and the existing infrastructure. A lot of sites I think were considered. This hasn’t been done willy-nilly. This process has been going on for an awful long time. I think that some of the issues mentioned in the observations by An Taisce which have already been rehearsed in previous submissions,” he continued.

As of this Wednesday, seven submissions had been lodged with the local authority in respect of the new school. A decision is due from Limerick County Council on January 25.

Seamus Sheahan who is a Fianna Fail candidate for the Adare/Rathkeale electoral area in the local elections said that the new community school for Croom and surrounding areas is “urgently required”. “We have been let down by the authorities so many times over the last five years. Parents, pupils and staff are hugely frustrated at the ongoing delays,” he said.