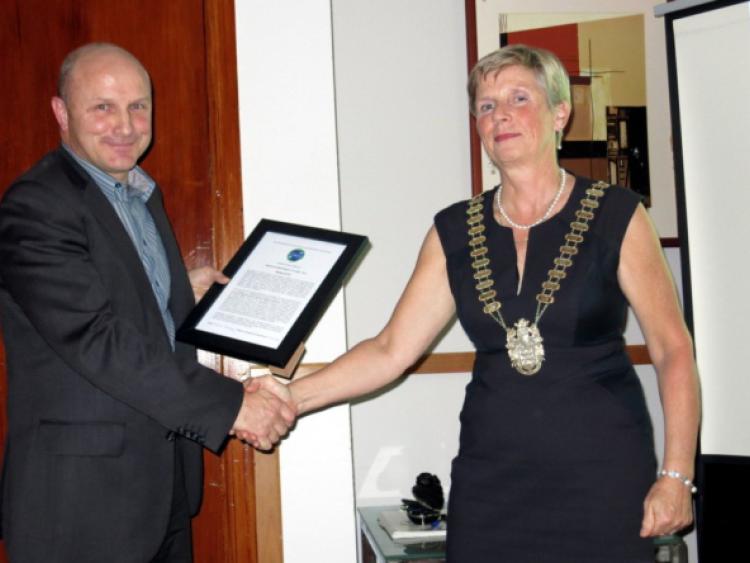 MULKEARLIFE has begun 2014 on a high with the news that the project has been extended for a year and receiving an environment award.

MULKEARLIFE has begun 2014 on a high with the news that the project has been extended for a year and receiving an environment award.

The €1.75 million project, which has been active since late 2009, has focused on the conservation and enhancement of habitat for Atlantic salmon, sea lamprey and European otter.

It is centred on the Mulkear catchment, covering an area of approximately 650 sq kms across County Limerick and Tipperary, is focused on the rehabilitation of degraded river habitats.

MulkearLIFE’s manager, Ruairí Ó Conchúir, said the extension by the European Commission ensures they have the opportunity to fully utilise the €1.75m budget. It was due to end in December 2014.

“With the weather in 2012 we were unable to undertake any instream restoration works on the Mulkear river. It will also mean that we will be in a position to continue to work with local farmers and to fully complete our programme of monitoring on otters, sea lamprey, salmon and on water quality generally,” said Mr Ó Conchúir, who is currently keeping an eagle eye on the high water levels. New projects will also be announced,

They are celebrating on the double as MulkearLIFE was presented with the environment award of the Chartered Institute of Water and Environmental Management (CIWEM) at a ceremony in Cork city before Christmas.

Suzanne Dempsey, CIWEM chairperson, said she was delighted to acknowledge the contribution of MulkearLIFE in bringing community and government together to plan, manage and enhance the conservation status of the lower Shannon SAC.

She congratulated all involved in MulkearLIFE especially the lead partners in Inland Fisheries Ireland, the OPW and Limerick County Council and wished the project every success.

The National Parks and Wildlife act as project co-financiers. A range of other stakeholders support the project including local authorities - North and South Tipperary County Councils; as well as other state bodies - ESB Fisheries, Teagasc, Coillte, EPA; and most especially the local community - IFA, ICMSA, Mulkear and District Angling Association, local schools and school children, farmers and volunteers.

Mr Ó Conchúir said the success of MulkearLIFE has been highly dependent on an active catchment management partnership process and on extensive outreach work to enhance environmental awareness for those living within or near the catchment.

He noted that the project has worked hard to promote the importance of the Mulkear catchment on a regional, national and international basis. Mr Ó Conchúir stated that a major objective has been the development of strong community links through a comprehensive environmental educational programme within local schools, in addition to actively managed practical conservation outings undertaken by the Mulkear Conservation Volunteers.

They have undertaken 70 classroom engagements and separate half-day river based field trips with over 1,700 schoolchildren and conducted field-trips and training for over 300 children and adults.

This complements the work on the Mulkear.

Twenty five rubble mats have been installed; strategically placed over 600 random boulders on the Annagh, Bilboa and Newport rivers improving instream biodiversity; treated over 200 kms of river channel to control non-native invasive plant species with focus on giant hogweed and knotweed species and manually removed other invasives from high nature value sites in the catchment. They have successfully installed three fish passes specifically designed to assist sea lamprey ascend major barriers on the over Mulkear. Ballyclogh weir was removed to assist fish passage and greatly improve upstream habitat. These are some of the many initiatives with more to come in 2014.