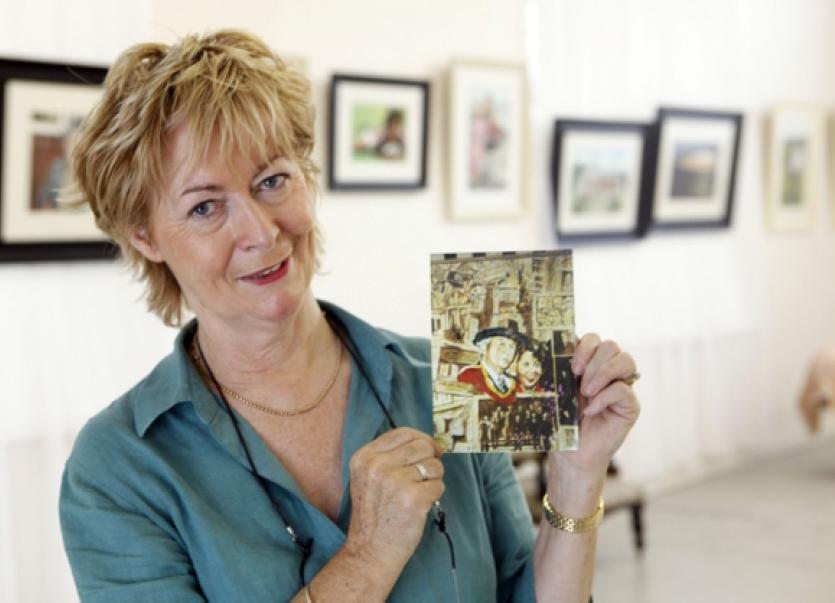 I, then, went on to live in Rathbane where I spent the remainder of my childhood. My education took place at the Presentation Convent, Sexton St., where the nuns were very good to me. They saw the potential in my early art work and made exceptional time available for me through extra classes. In particular, I am most grateful to Sister Perpetua. She was very instrumental in seeing that I furthered my artistic career and suggested that I go on to the School of Art then located in Mulgrave St. Today, I live with my darling hubby, John, on the North Circular Road together with our little dog Millie. My daughter Emma lives in London and my son Barry is married and lives in Dublin. They are both very artistic and like myself are great fans of Munster Rugby.

Art is a great way to forget about your worries, lose yourself in creativity, and get a lot of satisfaction in the process.

In fact, I could not live without painting .For me the creative process just happens and it is truly wonderful watching a creation taking shape, especially using watercolours which are so free. It gives me great pleasure and I enjoy spending the time just losing myself. In terms of my style I was greatly influenced by Rockwell and Keating, how ironic that Keating went to school at Leamy House. I was delighted when Dr. Nóirín Ní Riain introduced one of my exhibitions on Inishmaan and RTÉ covered it.

As a former member of the Irish Peace Institute (IPI) at the University of Limerick (UL), I still help to organise projects from North and South of the border.

During my time with the IPI we met many victims of violence from both sides of the divide. However, we made a contribution towards making their lives a bit more hopeful for the future and broke down a few barriers in the process. In fact, today, we still maintain contact with those people we met down through the years. I even designed a Peace Badge and presented it to Mo Mowlam, then Secretary of State for Northern Ireland on the Late Late Show.

The most influential person I met during my time with the IPI, apart from Dorothy Cantrell, who is an exceptional person, was the late Dr. Brendan O’ Regan.

He was a man of great qualities, and was well before his time. It is a pity that such a man is not alive today but nevertheless he has left us with many fine legacies that continue to support tourism in the Midwest. My greatest and most emotional honour, however, was to design a plaque to the late Detective, Jerry McCabe, who was gunned down in Adare, Co. Limerick, by the IRA, in June 1996. It makes me sad, today, thinking about his family, especially Anne, his wife, their children and grandchildren, friends and colleagues.

About five years ago I became involved with the Frank McCourt Museum.

My father-in-law Jack Heaton purchased Leamy House in 1956 three years after it ceased being a school. He opened a factory there producing men’s suits and employing over a hundred workers. Ironically, one of the lads from the school (Cyril Benson) finished up working at the factory and he is mentioned a lot in Frank’s Angela’s Ashes. We were introduced to Frank McCourt by Jim Kemmy who had his office at the Mechanics Institute in Hartstonge St. It was very emotional for Frank the first time he went through the front door, as only teachers were allowed to  do so.

Frank McCourt kindly agreed to open my art exhibition in New York in 2002.

It was a very moving time to be in New York just after the twin towers disaster. It stunned the world, and was a day that changed the world forever. We went to St. Paul’s Chapel of the Trinity to pray. What an emotional time to be there. I will never forget the rawness of mans inhumanity to man. What God tells you to kill for religion? Later, I donated a painting to Mayor Bloomberg, of the NY firemen raising the American flag over the scene of the disaster.

Angela’s Ashes- the Musical was produced by Adam Howell a young man from Derby in the UK.

He read the book at 15 and became obsessed with it deciding to write the musical with Paul Harte. When it was shown in Limerick I asked the cast if they would sing Barefoot Days at the final performance. This was Frank’s favourite song. It was so moving that many tears were shed especially as it was the same time (New York, 2009) that Frank passed away. There was a party in South’s Pub with friends and family, singing and telling stories way into the wee hours.

The Frank McCourt Museum is a member of the Irish Museums Association (IMA). This association allows us to keep abreast of what is happening in museums all over Ireland.

It, also, makes our hard work and effort really worthwhile and gives all involved great satisfaction in seeing people from all around the globe coming to Limerick purely to visit the Frank McCourt Museum. I only wish that Frank was alive to see what we have achieved. However, in September this year we are holding our first Frank’s Way Festival and have been closely involved with local schools through the Red Tech and Narrative4 projects. These are exciting times, and I hope that the future will shine even brighter for our museum and Limerick City of  Culture!

If you have old photos of Leamy House or would like to become a docent at the Frank McCourt Museum please see the website: http://www.frankmccourtmuseum.com/ or email: frankmccmuseum@gmail.com