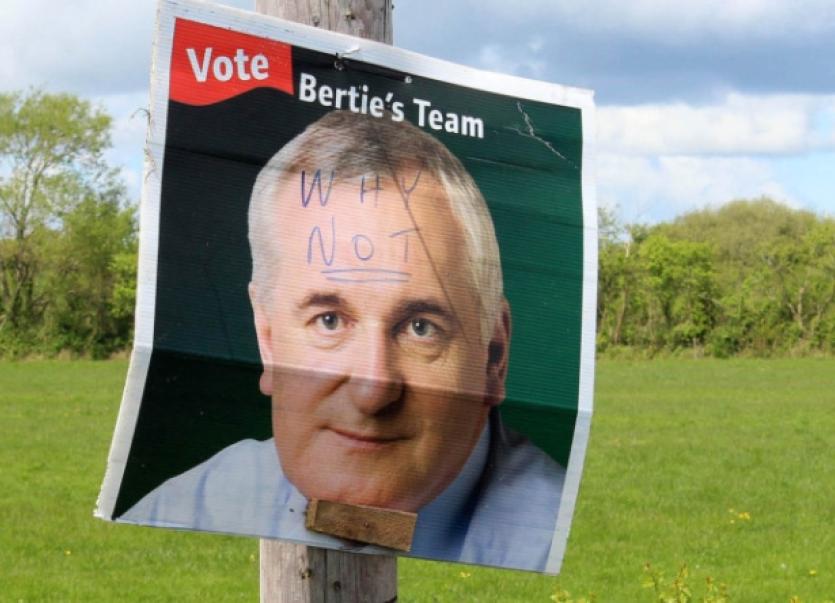 A poster of the former Taoiseach has mysteriously appeared on a pole on the main Limerick to Cork road near O’Rourke’s Cross, Bruree, almost stopping motorists in their tracks.

The poster, which features a beatific-looking Bertie, has been nailed on the pole with a piece of timber.

It urges the electorate to ‘Vote Bertie’s Team’.

“It’s controversial enough. There are a lot of people talking about it and wondering who put it up there,” said a local this week.

The poster - which was erected almost a fortnight ago - has already been daubed with graffiti with someone penning ‘why not’ across Bertie’s crease-free forehead.

“Somebody must have been storing it away because that’s an old poster,” continued the local.

“A bit of thought went into it. It’s a very busy road and whoever did it was determined to make sure it went up. They must have drove there with it. It’s not something you would be walking around with under your arm,” he added.

The former Taoiseach hasn’t graced an election campaign poster since 2007 when he successfully contested the general election.

The Fianna Fail slogan at that time - which has been ripped off of the bottom of the O’Rourke’s Cross poster - was ‘Now, the next steps’. In 2010, the Former Fianna Fáil TD confirmed that he would not be contesting the next general election which took place the following year.

Meanwhile, a total of 86 people will chase some 40 seats across Limerick when the local elections take place next week. The elections are the final part of the amalgamation of Limerick city and county council.

This week’s Leader includes a 40-page guide to all candidates with in-depth analysis of each of the electoral areas.