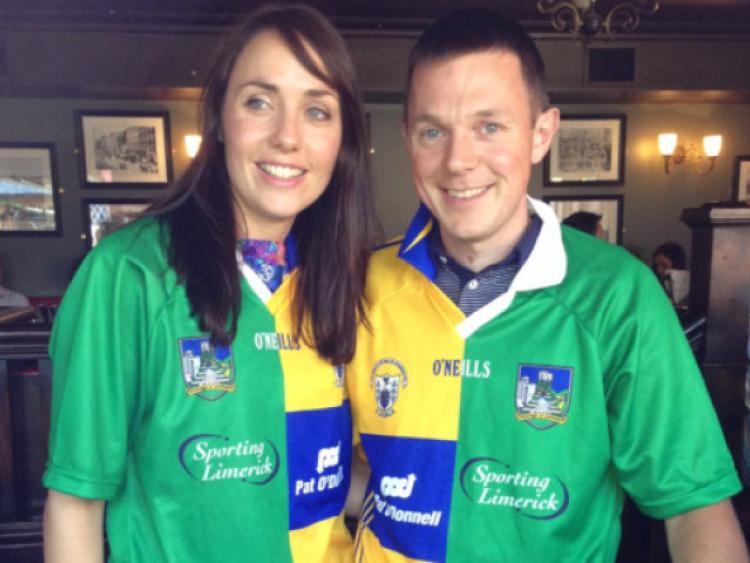 THEY were joined together in holy matrimony on Saturday but by Sunday afternoon holy war had broken out between Eamon Noonan and his new wife Fiona Caulfield Noonan!

THEY were joined together in holy matrimony on Saturday but by Sunday afternoon holy war had broken out between Eamon Noonan and his new wife Fiona Caulfield Noonan!

The newlyweds - both staunch GAA supporters - were happily married in St Senan’s Church, Clonlara on Saturday, but were divided when it came to which team they were supporting on Sunday.

Eamon who hails from Kilmallock and Fiona who is from Clonlara were at opposite ends of the Ardhu Bar on Ennis Road on Sunday as the Treatymen went head-to-head with the Bannermen in the All-Ireland semi-final in Croke Park.

“We were at the Limerick side of the pub and Fiona was at the Clare side,” a relative of Eamon’s explained this week.

“There was a good bit of banter between both families. The Limerick side were quiet in the end,” she added.

Eamon and Fiona who celebrated their wedding reception at the Radisson Blu Hotel in Limerick met while working at Roche Ireland, a pharmaceutical plant in Clarecastle, where they still work.

While they were dressed to the nines for their big day on Saturday, on Sunday it time for the pair to get back into the casuals - the trusted hurling jersey!

As a surprise however, Fiona’s sister Catriona had ordered special dual jerseys for the newly-married couple - half Limerick, half Clare.

“They wore the jerseys in the pub on Sunday to watch the match but of course they were in separate parts of the pub.”

While the result in Croker didn’t go Eamon’s way, he has something to look forward to on Monday - the honeymoon in Lanzarote with his beautiful bride Fiona!