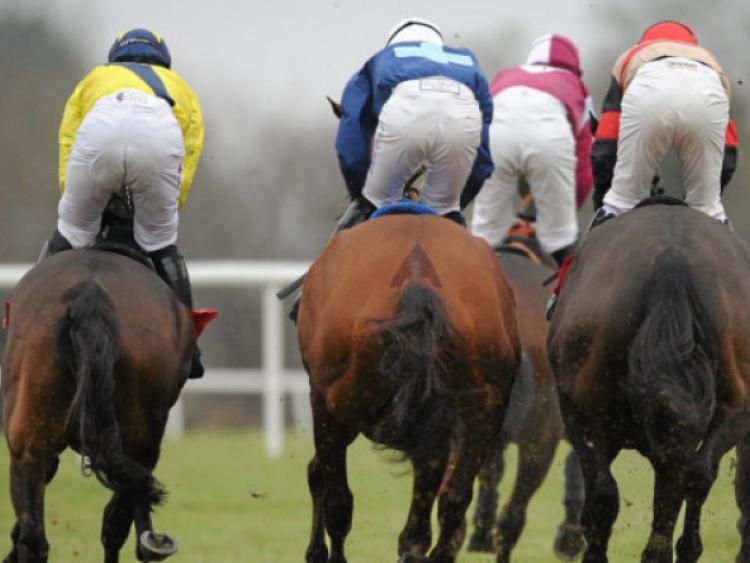 In her weekly Limerick Leader column, Katie McNamara reports on a busy week for the Limerick horse-racing community.

In her weekly Limerick Leader column, Katie McNamara reports on a busy week for the Limerick horse-racing community.

With the surprisingly beautiful weather this week, the ground conditions at many racecourses around the country changed from soft to good which seemed to bring some shocking results.

Rathkeale jockey Emmet McNamara was the first of our county Limerick jockeys and trainers to produce such a result as he guided the Jessica Harrington trained ‘Weather Watch’ to victory in the Follow @TipperaryRaces Median Auction Maiden over a mile and a half at the venue last Thursday evening.

The 16/1 shot was running for the second time in his career having finished well down the field on his debut. The son of Hurricane Run was no easy ride and McNamara managed to settle the three year old in fourth. The last furlong saw a thrilling three-way finish between Weather Watch, Gerdago and Feile Bride but the strong drive of McNamara ensured Weather Watch got up in the final few strides to land the contest by a head.

Winning owner Patrick Cooper remarked “He didn’t run any sort of race first time and this was very unexpected but it was great”. Harrington’s daughter Kate added “This is Emmet’s first winner for the yard. Weather Watch was very green the first day and he always takes a lot of work”.

The following day brought an even bigger shock as Bruree trainer Enda Bolger pulled off an impressive double at Downpatrick. The first leg of the double came in the form of the JP McManus owned Mount Sion, who took the Now You’re Talking Handicap Chase under Niall Madden.

The seven year old had previously won at the Northern track last June as well on good to soft ground and the good ground on the day seemed to suit him well. The 8/1 chance was last seen finishing well down the field in a banks race at Punchestown. Bolger was not present on the day and winning jockey Niall Madden commented afterwards “He did it well. When the horse fell with a circuit to go he got everything his own way in front. He enjoys it here. He won a Hunters Chase here before”.

The final leg of the double came half an hour later with Keep on Track taking the Catch Me If You Can Hunters Chase which Mount Sion won last year. The James Carroll ridden gelding tracked the leaders throughout and was ridden to challenge two furlongs from home where he kept on strongly to take the contest by five lengths.

The 11/2 shot had previously won a point to point at Dromahane and this was the six year old’s first win on the track. Winning owner Bill Porter from Co. Antrim commented afterwards “Enda likes him and he likes that faster ground. He ran well on his last course outing and Enda told the jockey to leave plenty in the tank for the end. I also have Drawn n Drank with Enda and I have a few with Ian Ferguson”.

The in-form Chris Hayes was gracing the winners enclosure once again this week as he guided the Kevin Prendergast trained Majenta to land the TRI Equestrian EBF Fillies Handicap over a mile and a half at the Curragh on Sunday. The daughter of Marju had won at Dundalk last month over a mile and a quarter and she clearly appreciated the extra two furlongs on the day as she battled on gamely to fend off the challenge of Maggie Dalton by a length. The three year old filly was available at 6/1 in the morning and was well supported on track from 9/2 in to 4/1. Prendergast commented afterwards “She stays well and likes the ground. We had to run her at Dundalk before to get some decent ground. We’ll try to get her some black type as the owner is a breeder and that’s his main interest”.

For many, the most surprising winner of the week may have been the Charles Byrnes trained Arnaud. The Gigginstown owned gelding proved that his winning debut over fences in Killarney last month was no fluke where he beat the classy Rebel Fitz by five and a half lengths.

He went on to score the Dermot Hughes Car Sales Chase on Monday in Roscommon where he beat the talented Steps to Freedom by half a length. Arnaud went off the third favourite at 9/4 and certainly put his doubters in their place as he chased the leaders throughout and recovered well from a mistake four from home to stay on the strongest of the field.

Given a confident ride by Davy Russell, the son of Chevalier is proving just how much a change in obstacles is worth and he has most definitely shown just how classy he is since switching to fences. Russell did a pound overweight [10-9] on the five year old as his intended mount, the Mouse Morris trained Rathlin, was withdrawn beforehand. Russell commented afterwards “He enjoyed the ground and it’s pretty quick. He is so good to jump a fence. Ten stone nine is the lowest weight I do for Gigginstown”.

Byrnes was not present but added later on “He likes the ground and we’ll keep him on the go and hopefully he’ll run at Galway. He obviously has plenty of speed and I’d like to run him on the flat”. World Hurdle winner Solwhit was running in the Grade 1 Grand Course De Haies D’Auteuill on Sunday in France which is the equivalent of the French Champion Hurdle. It is run over three miles and one furlong compared to the English and Irish Champion Hurdles which are run over two miles.

Solwhit went off the 5/4 favourite and was given a patient ride by Davy Russell who waited with the son of Solon before challenging the leaders upon entering the straight. However it was the 8/1 shot Gemix who stayed on the strongest to beat Solwhit by eight lengths in second. The Byrnes inmate has been a credit to all his connections these past few months and will no doubt be heading out for a well deserved break for the next few months.

The annual point to point dance awards night was held in the West County hotel in Ennis last Saturday night and it was heart warming to see our very own JT McNamara honoured. Master of ceremonies Richard Pugh did a wonderful job in putting together a slideshow of McNamara which saw him winning in the likes of Cheltenham and Punchestown.

McNamara could not make it on the night but received the Racing Post Senior Champion award and his good friend Brian Hassett was elected to receive the award on behalf of the popular jockey. Upon collecting the award, Hassett said “He told me just the other day that the only way I’d ever get up on this stage again is if I was doing it for him. That’s the kind of guy he is. Even now he hasn’t lost his sense of humour. That’s him. He never knows when he’s beat”. Richard Pugh added “It takes about a week to get booked in to see him in hospital, he’s that popular. It’s not one of his titles that he should consider his greatest achievement, but the manner in which he has taken this injury. He is an inspiration to us all”.

I’m sure I speak on behalf of many when I say it was wonderful to see McNamara honoured and applauded throughout the night and our best wishes are sent to him for a speedy recovery.