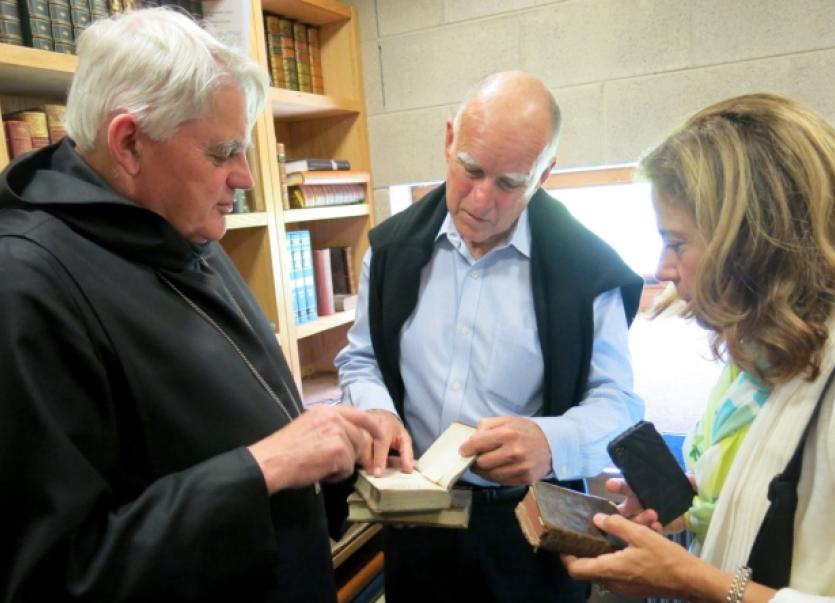 HE IS the governor of the eight largest economy in the world but his trip to Ireland didn’t make one headline.

HE IS the governor of the eight largest economy in the world but his trip to Ireland didn’t make one headline.

Jerry Brown, Governor of California, stayed in Adare and visited Glenstal Abbey during a two week holiday in Ireland and Germany.

While the trip was a personal one he did meet with Enda Kenny and Eamon Gilmore before returning to America at the weekend.

“We like to go back and connect the dots,” Governor Brown told The Sacramento Bee newspaper.

His great-grandfathers came from Tipperary during the famine and Germany. It is understood he met with relatives.

Abbot of Glenstal, Mark Patrick Hederman said the trip to Murroe on July 17 was not pre-planned.

“It was a hunch on his part and was to do with hearing Gregorian chant performed live somewhere near.

“The visit was first of all about himself and his own roots but it also had to do with Ireland and we would do well to read the symbolism of his time here.

“One of the secrets to understanding him is his Jesuit education.

Not only was he at school with the Jesuits but he became a Jesuit himself for six years before leaving the seminary and becoming Governor of California for the first time from 1975 to 1983,” said Br Hederman.

The party of four spent four hours in the Benedictine monastery. They went to Mass, enjoyed lunch before visiting the library and icon chapel in the crypt of the church.

Br Hederman showed him the Orthodox icons and the special collection in the library.

The abbot says his high powered guest was particularly interested in the limited and numbered edition of the works of Alexander Hamilton.

This was in-keeping with Mr Brown’s homeland as he was chief of staff to George Washington, founder of the nation’s financial system and the first American political party.

First editions of Joyce’s Chamber Music and WB Yeats’ The Tower, which contains the poem Sailing to Byzantium, also captured the Californian’s imagination.

Indeed, he quoted verbatim the lines of Joyce at the end of a A Portrait if the Artist as a Young Man to the Abbot.

“When you are dealing with someone as high-powered and as charismatic as Jerry Brown then everything he says and does, especially on a whirlwind tour of his ancestral country, are highly intuitive and emblematic.

“He developed a great affinity with James Joyce whom he finds as intense and as tortured an ex-Jesuit student as himself,” said Br Hederman.

While in its own right California is the eight largest economy in the world, it hasn’t escaped the global downturn.

The governor has imposed austerity and budgets that allow the state to “live within its means”.

“What must be avoided at all costs is the boom and bust, borrow and spend, of the last decade,” Mr Brown declared at the beginning of the year.

A quote that certainly resonates in Ireland of today.

“But this detour to a Benedictine monastery in central Ireland was also a commentary on the Ireland of his roots and the Ireland he was encountering on his visit. He saw the Book of Kells and somehow he felt that the secret for Ireland was to retrieve something of the artistry, the selfless artisanal work ethic of those medieval geniuses.

“He felt that economically Ireland was buffeted by the inexorable waves of world market forces and did not have any control of a fragile future. But deep down in the soul of Ireland there was an artistry and an integrity that, if retrieved, would be ‘the uncreated conscience’ that would see us right.

“And so, he wanted to find a place where Latin was understood and Gregorian chant was sung on a daily basis and he was led to our monastery for one single day of his time in Ireland,” said Br Hederman.

The monks gave Mr Brown a Cantus Selecti (Gregorian repertory) so he could sing Gregorian chant in California, and recordings of their choir singing plain chant and their new Resurrection office called Resurrexit.

“He seemed delighted with himself and said he was in no hurry to leave, that he had no appointments until 10am,” said Br Hederman. However, his sister reminded him that they were having dinner with cousins that evening.