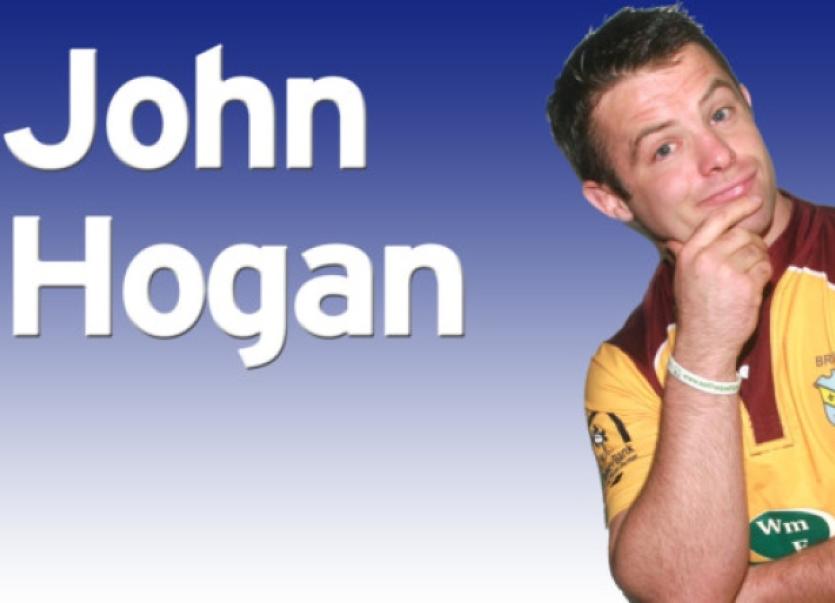 In his Limerick Leader ‘ Hooker’s Diary’ column, John Hogan reckons Bruff’s days in Division 1B of the AIL are coming to an end.

In his Limerick Leader ‘ Hooker’s Diary’ column, John Hogan reckons Bruff’s days in Division 1B of the AIL are coming to an end.

Easter can mean a variety of things to a variety of people. Depending on your persuasion, this time of year can be about eating chocolate eggs, stockpiling liquor for Good Friday, or of course gathering with your family to celebrate the birth of the Easter Bunny.

For the Bruff panel however, most of the Easter weekend would be spent travelling to and from Ballymena in Co. Antrim. Our farthest-flung opponents of the year were also our unwilling bedfellows in the basement of Division 1A.

Bruff and Ballymena’s propping up of the rest of the league has had something of a resemblance to an unhappy marriage throughout the year. Neither of us wants to be here, the entire experience has shorn us of much of our confidence and now a lot of our time is spent figuratively staring back and forth, wondering if we could lift ourselves from this nightmare by standing on the other’s neck.

This weekend, we would find out whose neck was going to be stepped on and who would be giving themselves a fighting chance at emerging from our subterranean existence.

Going by the news, Northern Ireland has turned into something of a Winter Wonderland at the moment. It was probably appropriate preparation, then, that the conditions at training this evening were inclement in an apocalyptic sense.

They must have forgotten to close the roof and turn on the under-pitch heating at Stade de Kilballyowen, because the ground was sopping and cold enough to give frostbite to those unlucky enough to spend an hour sprawling around on it.

I don’t want to raise any suspicions about the Limerick Leader tolerating inaccuracies in its reporting, but the title of this very column has become somewhat misleading of late. This evening’s team announcement had me starting in the back row for the second game running.

However, ‘The Blind-Side Flanker’s Diary’ doesn’t have quite the same ring to it, and also rules out the possibility of all future gags comparing myself to a member of the world’s oldest profession.

Well, accuracy can take a back seat for now. I’m not willing to give up that kind of opportunity for the sake of a positional switch, the folly of which could become very apparent once the opposition realise there’s an imposter lining out at number six.

We were greeted by the sight of over a dozen caravans parked in a neat formation upon arrival this afternoon in Ballymena RFC. My first thought was that Bruff’s army of fervent travelling supporters were attempting to intimidate our hosts by establishing a presence right next to the pitch.

I was informed, though, that the club doubles up as a campsite for caravan clubs on holiday weekends. That explained why I hadn’t recognised anyone when I wandered into what I thought was an encampment populated entirely by my loyal followers.

Although much of the journey North had been through snow-covered landscape, the pitch in Ballymena was perfectly prepared for the game. Unfortunately, so was our opposition.

On many an occasion this year, we’ve shown an unfortunate tendency towards over-politeness when playing away from home. Like all good guests, we’ll often bring a gift for our hosts, and on this occasion, that gift took the form of three first half tries that were coughed up all too easily.

Although we finished brightly, dominating the final quarter of the game, it was too little, too late, with the game finishing 29-14 to Ballymena.

Nerves could well have been to blame for our complacency, as we were all well aware of the implications of losing. Defeat, if not quite the final nail in the relegation coffin, certainly represented the undertaker’s hammer being raised up for one last lash.

The drive home was the fifth, and thankfully final, time we would make the long journey back from Northern Ireland this year. Our spirits were fairly low at first but after a few miles, and a few beverages, our disposition was somewhat sunnier.

By the time we were back in the Republic we were already able to slag each other off about individual blunders that had contributed to defeat a few hours earlier in Ballymena.

Some might find it odd to be so cruel to one another so shortly after the game, but only amongst very close friends can you mercilessly stick your finger into such a recently-inflicted wound. And on the Bruff team bus, regardless of the result, I’m proud to say that I’m still surrounded by some of my closest friends.