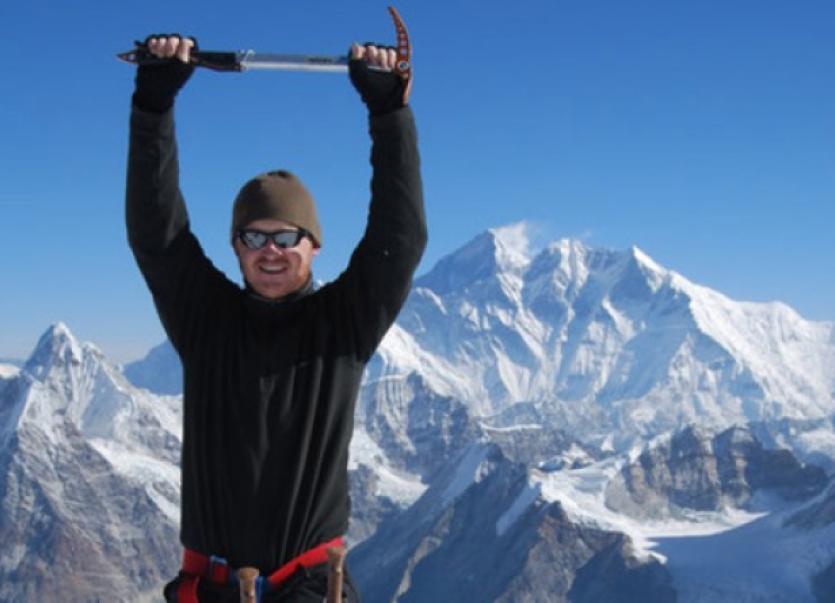 TWO weeks ago Ahane GAA Club unveiled a statue to Mick Mackey, now they have another hero to celebrate - Everest conqueror Brian Meskell.

TWO weeks ago Ahane GAA Club unveiled a statue to Mick Mackey, now they have another hero to celebrate - Everest conqueror Brian Meskell.

The 33-year-old Castleconnell man, from a family steeped in GAA, was the first in his group to stand on top of the world in the early hours of last Wednesday morning.

Mum, Rose, said she was proud and relieved to know that everything had gone to plan.

“We stayed up until 2am in the morning following it on the Adventure Peaks website. He was very well prepared but it is extremely tough - you miss a foot and you are gone or you can go blind.

“He phoned a couple of days afterwards and was in excellent spirits. He is over the dangerous side now,” said Rose.

The 2004 county medal winner became the 33rd Irish man to climb Everest but certainly the first to plant an Ahane flag at the top.

However, the spuds weren’t boiling as wind chill equivalent temperature was -50°C and a facial frostbite time of five  minutes.

Brother, John, said that Brian asked him about two days before he left in early April had he “any auld Ahane flag lying around anywhere to bring to Everest?”

“I hadn’t and got onto our club secretary Dennis Murrihy and his wife Mary whom are both involved in the club in a huge way. They had a fine big flag which and were delighted to give it to Brian.

“He unfurled the Ahane flag and hoisted it on Everest’s summit at 8,848m – where it remains – the club secretary won’t be happy as it was only on loan!” joked John.

The family is completed by dad John, brother Kevin and sister Sheila. Their worries weren’t over once they knew Brian had reached the top.

“After spending some time on top he along with some others in the group began the even more dangerous descent to head for the advanced base camp and below the 8,000m ‘death zone’.

“Many people sign waivers when in this zone that if they die, they will be left there as it is too dangerous to try and remove the bodies – there are hundreds of other unfortunate souls left on Everest as reminders to the dangers with about a 2:1 ratio of deaths on the north ridge to the south approach.

“There had been quite a few unfortunate climbers during the time Brian was there – he passed one body on the way down from the summit who had died that morning. If you come down from Everest OK, with no frost bite, snow blindness etc you are doing well and lucky – Brian was,” said John. Placing the Ahane flag on Everest gives him legendary status. Indeed, it was the GAA that started him on this expedition.

The talented hurler and footballer had to stop playing because his job as a marine technical officer keeps him away for months at a time.

About four years ago John went on a run up Keeper Hill in Newport. He suggested to Brian to try it which he did. That began a journey for Brian that has ended on top of the world.