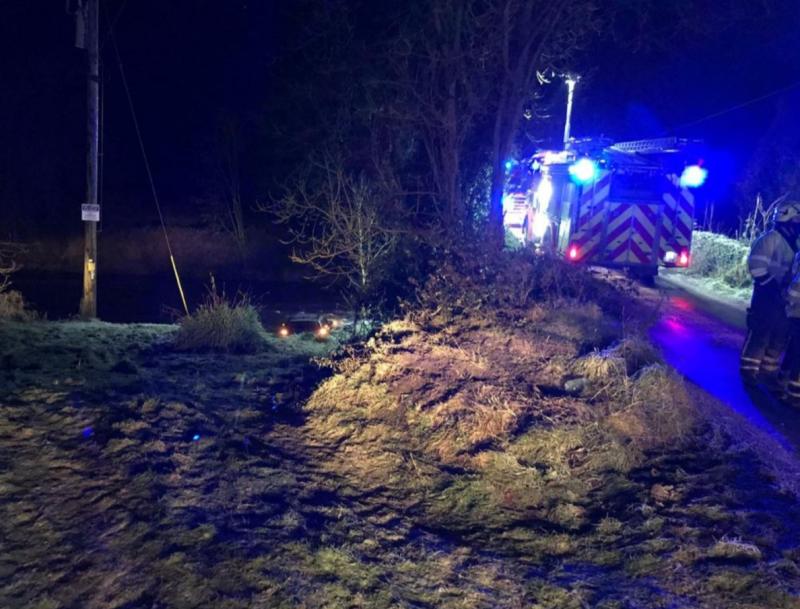 The scene of the incident

TWO Limerick gardai have been praised after they helped rescue a woman from the River Deel near Askeaton after her car entered the water.

The alarm was raised shortly 7pm on Saturday when gardai were alerted to reports that  a car had skidded off the road and entered the river at Newbridge, Askeaton.

According to gardai, the water had risen to waist level by the time they arrived and the significant current in the river meant the driver was not able to open the door of the car.

Garda Michael Hally and Garda Andrew Maher, who are attached to Rathkeale garda station, attended the scene where they saw the car in the river and a woman sitting in the driver’s seat in a distressed state.

The then entered the freezing cold water and brought the woman to the riverbank. Emergency services subsequently attended and carried out a check on lady who was shaken but luckily suffered no injuries.

"Michael and Andrew deserve tremendous praise for their quick actions in coming to this lady's aid. Keeping people safe is at the heart of everything we do and this is another great example of our commitment. The conditions on the night can't be under estimated as the temperature were around minus six," said Inspector Andrew Lacey.

"At all times of the year we should take care on the roads, but lately we have had icy conditions which require drivers to take extra precaution on the roads. Ensure you leave extra distance between you and the vehicle in front and avoid harsh braking and harsh acceleration. Make sure your vehicle is winter ready," he added.

The driver, who wishes to remain anonymous, said: "I just really want to thank the two gardaí, Michael and Andrew, the fire brigade and the ambulance services for coming to my rescue. Without their help, who knows what could have happened to me," she said.