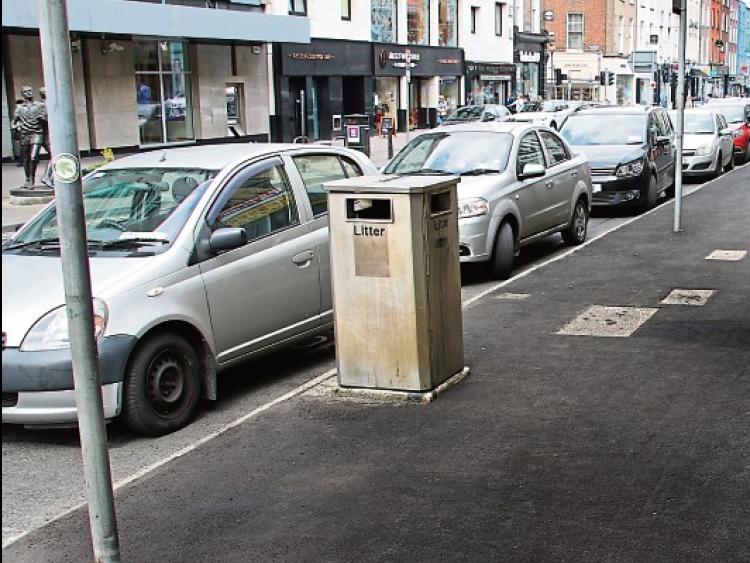 According to the latest IBAL report, the judges found O'Connell Street to be 'heavily littered'

The first nationwide litter survey by business group Irish Business Against Litter (IBAL) since the Covid-19 crisis shows Limerick city has lost its ‘clean’ status and dropped nine places in the rankings.

Meanwhile, Galvone on the soutside of the city has fallen to 39th in the rankings and is now categorised as being ‘seriously littered’ category.

According to the latest IBAL report, there was a dramatic fall in the number of clean towns and cities across the country, to its
lowest level since 2007.

The survey, which was carried out by An Taisce, showed PPE litter to be widespread and a rise in the prevalence of cans and glass bottles.

In common with most other cities, Limerick has slipped from 17th to 26th position since last year and is new described as moderately littered.

The report states the quayside and riverside environments (Clancy Strand, Bishops Quay and Georges Quay)  presented particularly well with regard to litter and overall streetscape.

"Colbert Train Station created a very good first impression of Limerick city for any visitors arriving by train – it is a lovely, welcoming environment," it states.

Other top ranking sites highlighted in the report include the Hunt Museum and King John’s Castle.

However, the two recycling facilities and bottle banks at Honan’s Quay and Dock Road were seriously littered and presented poorly.

"Other examples of poor sites included the residential area of Pike Avenue / Fairview Crescent and Greenhill Road and Liddy Street (vacant area at the bus stop)," states the report, which has been published this Monday morning.

The judges found that cigarette butts were a real problem in certain areas and that O'Connell Street was "heavily littered" which they say is quite unusual for a main shopping street.

In relation to the Galvone area, the report states just one out of the ten sites surveyed was categorised in the top
litter grade where there were three very poor sites.

In addition to being littered, dumping was also evident in areas such as the recycling facility at Roxboro Shopping Centre and the Galvone Buisiness Park.

"The Derelict site at the entrance to Churchfield / O’Malley Park presented very poorly and has deteriorated even further over the years," states the report.

Nationally, An Taisce deemed 23 towns to be ‘clean’ - a reduction of more than 20% on last year.

The number of towns reaching the highest cleanliness level – cleaner than European Norms - dropped by a quarter to 9, with Kilkenny edging out Athlone, Killarney and Portlaoise at the top of the rankings.

While no area was branded a “litter blackspot”, North Inner City Dublin was once again seriously littered, as was Galvone.

“The rise in litter levels this year is across the board,” says IBAL’s Conor Horgan. “The Covid crisis has seen more dumping, more outdoor socialising, especially drinking, and PPE litter, but less cleaning by local authorities and less activity by volunteers like Tidy Towns - a perfect storm, in many ways, which has brought us to the worst position we’ve been in in over 10 years," he added.