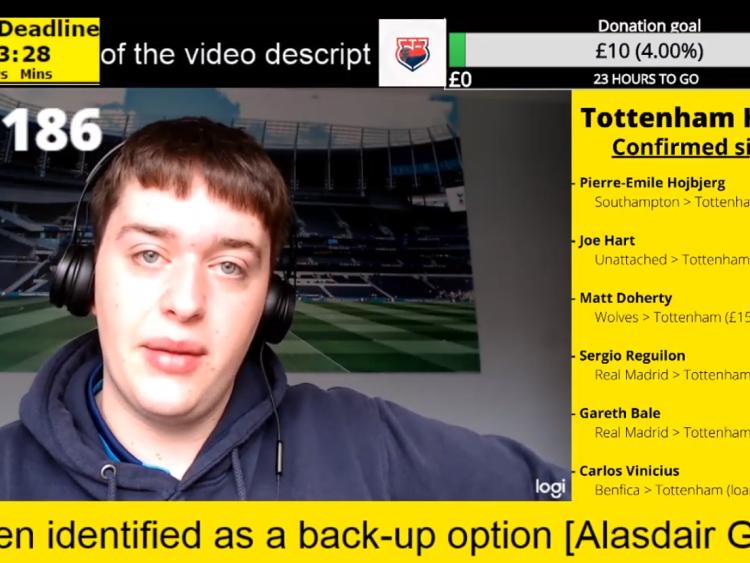 A TOTTENHAM Hotspur superfan from Limerick who has a blog dedicated to his beloved side will be live streaming during Transfer Deadline Day this Monday, in aid of charity.

Raheen man Matt Hayes has seen his YouTube channel, Matt Hayes - Tottenham Blog, attract over 3,300 subscribers and amass over 400,000 views since his channel’s birth in May 2019.

He is of course on cloud nine this Monday morning after Spurs secured a famous victory away to ten-man Man Utd on Sunday on a scoreline of 6 - 1.

His live stream is in aid of the JE3 Foundation, which is a charity set up under former Tottenham Hotspur left-back and former Leyton Orient manager Justin Edinburgh’s name.  Edinburgh tragically died last year, five days after he went into cardiac arrest and passed away five days later.

“The foundation in question were going to raise a lot of funds from a Tottenham game a few weeks ago but the game was postponed so they missed out on a lot. That's why I chose them,” Matt said.

Leyton Orient and Tottenham were scheduled to face each other in a Carabao Cup game but it was called-off due to a number of positive Covid-19 cases in the Leyton Orient team.

Tottenham fans rallied in support of Leyton Orient by spending approximately £20,000 on Orient club merchandise  to help them with the financial troubles during Covid-19. Tottenham striker Harry Kane spent the 2011/12 season on loan at Leyton Orient and has sponsored their shirts for this season.

Kane split the proceeds between three charitable causes, with the home shirt displaying a thank you message to the NHS heroes of the coronavirus pandemic, the away shirt showing Haven House Children's Hospice's logo and the third kit donated to mental health charity Mind.

“I'm planning on getting started around 9amor 10am and the deadline isn't until 11pm so it will be a long one but I'm ready.

“I'm bringing on various guests throughout the day so I'm hoping that will break the day up a bit, Matt added.

Matt aims to raise €250 for the JE3 Foundation.

“I want to aim for something that will be really beneficial to the charity but also something that is achievable. I think I might set the initial goal at €250 and then increase it if we reach that.

Other Tottenham Hotspur content creators will feature on the live stream throughout the day.

“I'm hoping they can bring a large following to the stream with them and, in turn, increase the donations we receive, Matt concluded.