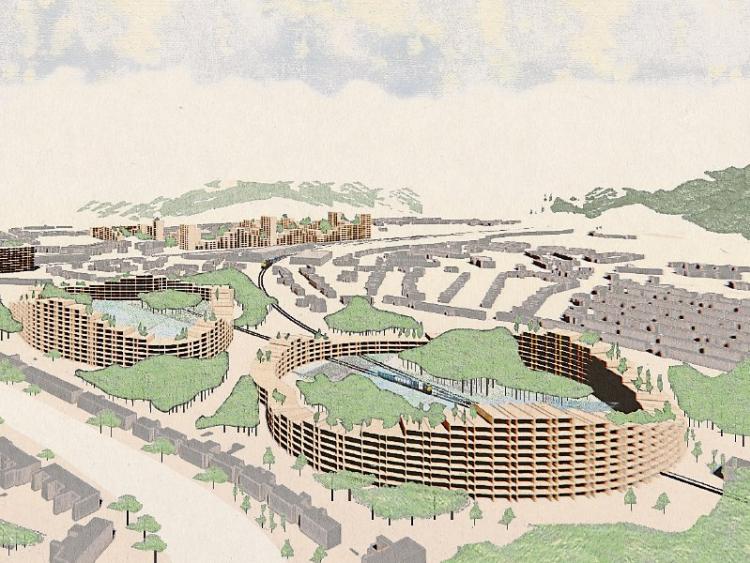 ‘Wood City’ proposal by one of the architects Merritt Bucholz

A COHORT of skilled architects have proposed early designs of what could be the most seismic transformation of the city since the dawn of Georgian Limerick in the 18th century.

The Limerick Leader has gained an exclusive insight into the design review of the redevelopment of 50 hectares surrounding Colbert Station, a project which could house up to 10,000 people.

The Colbert Station Quarter project was launched by the Land Development Agency and the council in 2019, after which the public were consulted on what they envisioned for the site. Based on this consultation period in early 2020, five architects put forward their design concepts.

These concepts will now be available for public consultation, after which there will be a draft framework in early 2021. LDA chairperson John Moran said: “There is no single right answer. It is structured to inform ongoing debate, to allow others to raise concerns and find answers to their questions.”

Council chief executive, Dr Pat Daly said that the project “will unlock a key city centre site that will result in the development of landmark projects that will complement established city functions”.

Biodiverse spaces, innovative connectivity, enhanced transport, and versatile communities appear to be the key ingredients in early concepts of Limerick city’s biggest transformation in over 200 years.

Five skilled architects have put forward their unique concepts of how 50 hectares of public and private land could be used to rejuvenate Limerick city centre, as part of the design review stage of the proposed Colbert Station Quarter masterplan.

This project, launched by the Land Development Agency and Limerick City and County Council in October 2019, could see thousands of new homes for up to 10,000 people.

The review is largely based on public consultation in early 2020 in which a “wide range” of submissions were received, the 35-page report said.

The architects’ impressions and notes will now be made public for a further consultation, after which a draft framework will be published by March 2021.

Piotr Mach, of EML architects in Limerick, suggested the idea of a “Limerick Skyline”—a cycle and pedestrian bridge that could connect as far as UL. He said that the pandemic has provided opportunities in “flexible working and appreciation for nature and outdoor activities”.

He said that a new “green heart” could be made through the creation of a Central Park, in addition to green routes, paths, community gardens and green roof terraces.

Mr Mach also mooted the idea of an underground train line between Limerick and Foynes, providing “additional opportunity for tourists to come and explore the city”.

In “drawing peripheral communities” closer to the city centre, she conceptualised an “Open Citadel” bounded by Parnell Street, Lower Carey’s Road, Roxboro Road and Upper William Street, with the train station at the centre, “surrounded by new and exciting buildings”.

In addition to a footbridge connecting Mulgrave Street and Jackman Park, she designed a “Gateway to the City” with “new distinctive buildings” acting as a new arrival into the heart of the city.

Mola Architecture’s Sean O’Laoire gave a conservative projection of up to 10,000 people in homes reaching up to six storeys. He envisaged that commercial space on these lands could be used for R&D, tech and specialist retail, and that St Joseph’s Hospital could be used as a “cultural attractor”.

Anne Kiernan, of Transport Infrastructure Ireland, proposed 5,250 residents in 1,200 units with an additional 1,300 student beds, in addition to 39,000 square metres of office space, 11,400 of which would be used as enterprise units with access to the railway line.

Merritt Bucholz, of Bucholz McEvoy Architects in Dublin, submitted proposals largely influenced by the environment and climate change. He proposed two large public parks, a public forest, and that buildings would be “prefabricated timber” structures, and would be low energy.

Limerick’s access to the port “could be leveraged to ensure maximum market access”. He said that the completed buildings and the forests “will develop into a lush green lung for Limerick, and the building will fold into the park system”.