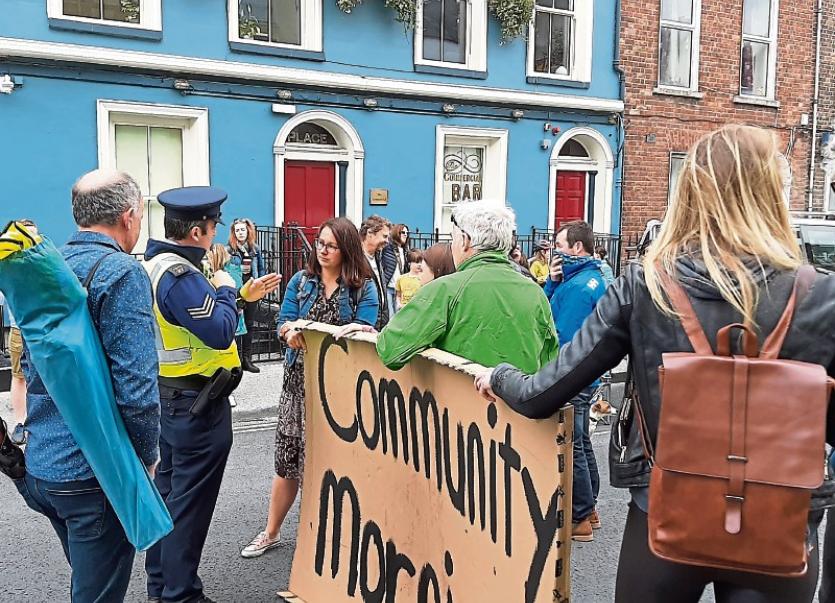 Gardai who attended a family-friendly event in the city centre this Saturday morning directed the organisers to reopen the street and allow traffic through after tensions developed between some motorists and attendees.

Organised by the #WeNeedSpace campaign, the community morning at Catherine Street – between Cecil Street and Glentworth Street – began at 10am.

More than a hundred people – including a large number of children – attended with many setting up picnic tables and chairs on the main road as they chatted with each other while maintaining social distance.

Cardboard signs with messages such as “people before cars” and “kids need space” were erected and the section of Catherine Street was closed to traffic as bunting was erected at either end. 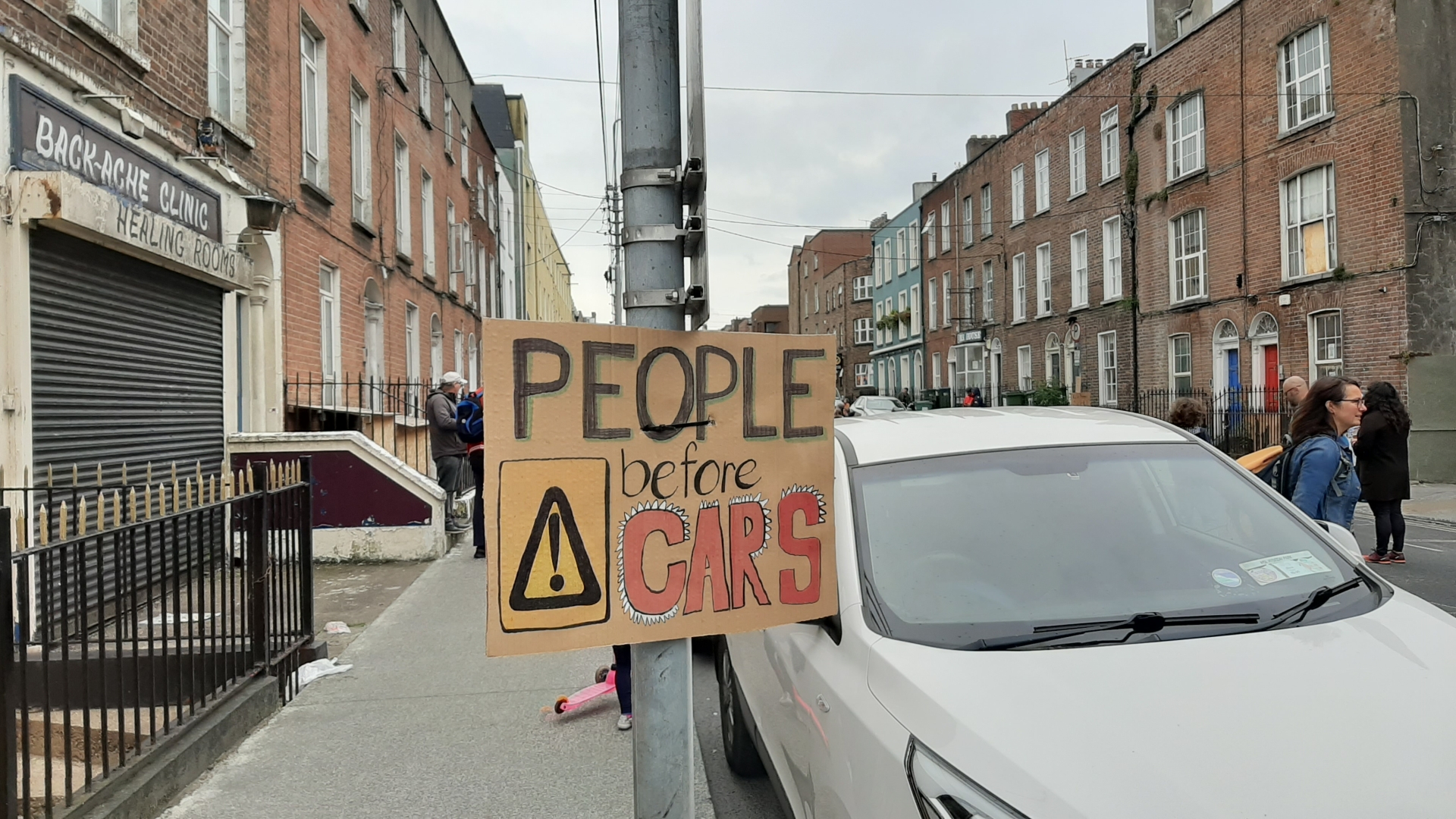 According to Madeleine Lyes of Limerick Pedestrian Network (pictured below) the event was organised out of a sense of frustration after it was revealed that some aspects of Limerick City and Council’s Mobility Plan are to be changed.

“We just wanted to organise something which wasn’t a big massive demo or a big angry barrier although people really are really upset about it. But this is a way to show what should be, this is what it could be like and we are trying to show a different way is possible for Limerick city,” she told the Limerick Leader. 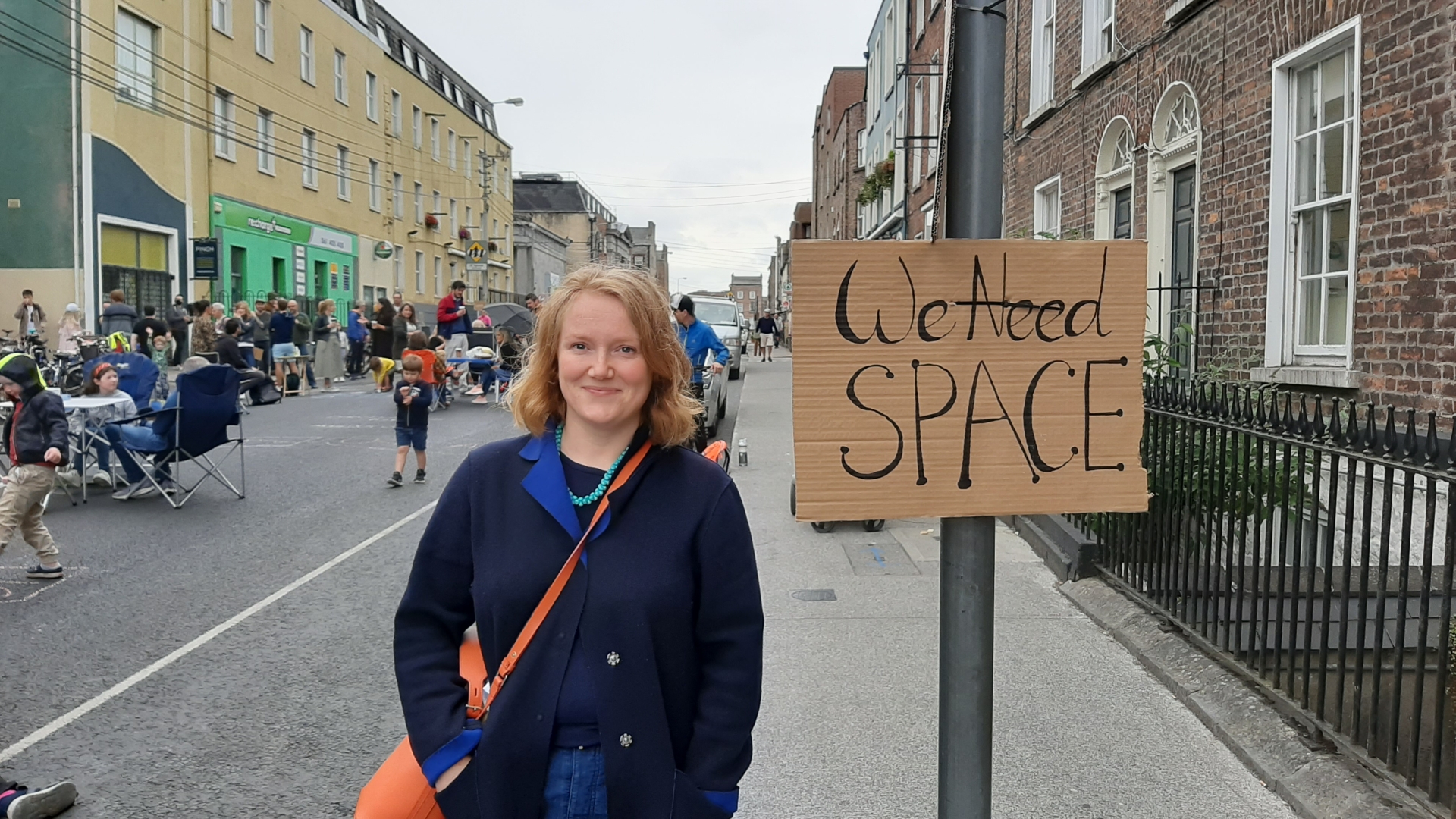 While the event was due to end at midday, a number of gardai attended shortly after 10.30am and, following discussions with the organisers, directed people to move off the street and to allow traffic through.

There were no issues with any of the attendees who remained peaceful throughout and agreed to move by 11am.

However, a number of motorists challenged some of those present while others could be seen turning back when it was clear they could not get through.

One man, who arrived in the area, became involved in a verbal altercation with some of the attendees and was asked to leave the area by gardai.

While those present were generally cooperative, a garda sergeant could be heard warning a number of people that they faced being arrested, under the provisions of the Public Order Act, if they did not move and comply with his direction.

There was also a lengthy conversation between the sergeant and several several elected councillors who were holding a large cardboard sign.

“This street is a dead street, we need feet in the street –  it’s just a rat run for motorists who will use any excuse to get to their destination. People’s attitudes need to change in terms of access to the area, we need to walk more often,” said Cllr John Costelloe.

Cllr Elisa O’Donovan said she was supporting the organisers of the event.

“This is our city, I live in this city – we’ve been living under a lockdown for the last three months since March and I have not been able to walk down this street safely. Out council has refused to put in any sort of public health measures for the residents of this city so now we are actually taking back the streets that are ours and I think and people are perfectly entitled to be in the streets,” she told the Limerick Leader.

Cllr Saša Novak Uí Chonchúir was another of those who attended the community morning.

“You only get an outcome with a bit a tension and this is how we bring attention to the problem that is that we don’t have space for people in the city and we are just taking it back now. For public health reasons we need to widen our footpaths and we need to be able to move around safety and we have not done that,” she said.

#BREAKING: Gardai have attended a community morning at Catherine Street in #Limerick city centre. They directed the organisers to reopen the street to traffic and to move away from the centre of the road. Full story soon at https://t.co/AVFlCJwz1r pic.twitter.com/YE4kOzeZAc