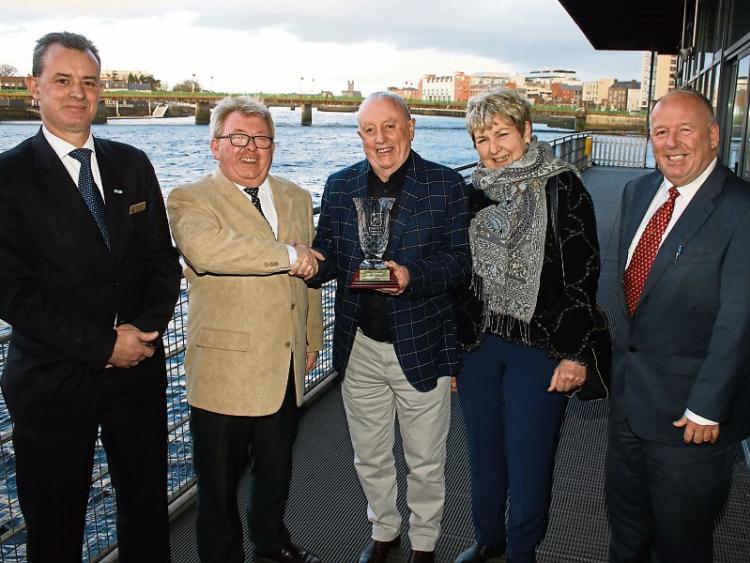 ONE of the world’s leading lights in the visual effects industry has been named the Limerick Person of the Month.

Max Dennison who grew up in Kildimo is one of the most respected artists in special visual effects.

Last September Max along with his team at DNEG, one of the world’s leading visual effects companies, took home an Emmy award for outstanding special visual effects in a supporting role.

He scooped the most coveted prize in the television industry for his artistic touch on the hit HBO show that captured the fallout of the Chernobyl nuclear disaster.

“Limerick is my home town and I’m delighted to have been given a part in its long and special cultural heritage. This award recognises the singular achievements of ordinary people doing extraordinary things and I feel especially privileged to be included with such alumni.”

Max, who attended  St Michael’s primary school and Villiers secondary school in Limerick city, was represented at the monthly award presentation by his parents Jim and Valerie.

Interestingly, Max’s interest in film was sparked during the 1980s  when the Neil Jordan-directed High Spirits was being filmed in Dromore Castle near Pallaskenry.

During the summer of 1988 Max would cycle up to Dromore Castle and was allowed onto the set to see the world of film in action.

“He got to know Daryl Hannah and all the actors and actresses and he met a man there called Derek Meddings who was the owner of a company called Magic Camera,” Jim explained.

“He was interested in Max and invited him over to Shepperton Studios, whenever he would get a chance.”

Max was about to do his Leaving Cert when he told his father Jim that he would like to pursue a course in special effects.

A talented illustrator Max spent the first year of his college career in Limerick in the school of art and design. He then went to De Montfort University in Leicester to do a degree in product design. He was also very good on computers.

“He had computer skills and illustrative skills. He went on to London to set up his own business producing painted furniture for special clients in hotels etc,” Jim explained.

Coincidentally, after that he ended up working by chance for Derek Meddings in Shepperton Studios.

“He started work with Magic Camera and the first job he worked on was The Borrowers with John Goodman. From there he went on to work on Shakespeare in Love and a number of other big films.”

A matte painting is a painted representation of a landscape, set, or distant location that allows filmmakers to create the illusion of an environment that is not present at the filming location.

Julie, Max’s then partner, now his wife, went with him and they spent three and a half years there while he was working on Lord of the Rings.

“On Lord of the Rings there were five special effects teams and between them they won three Oscars. Max was heading one of the teams,” said Jim.

“When Lord of the Rings was finished he went to Industrial, Light and Magic (ILM) based in San Francisco to work on Star Wars. After a year or so there, his wife, a fashion buyer in merchandising was headhunted by Dorothy Perkins to go back to London to be their buyer and Max at that time thought 'well, she has given up three of four years of her career' so they  came back to London and he began working with a company called DNEG in the televisions section of the industry.”

Two and a half years ago Max was approached by the Chernobyl producers to work on the five-part series. He picked up another award a fortnight ago in Los Angeles at the Visual Effects Society Awards. They are also nominated for a Bafta award.

“I have read reviews from Russia and they are amazed by the accuracy of the series,” said Jim.

“I was told even the shoe laces were from the period. It demonstrated the degree of accuracy they were aiming for.”

Max and Julie - who teaches fashion merchandising at the London University of the Arts - have two children, Isabella, 13, and Oscar aged nine.

His sister Shauna meanwhile, is a leading textile and wallpaper designer in the UK.

According to Jim, his son’s extraordinary career is down to “being good at what he does”.

“He had just finished Lord of the Rings and was working in America when an American book company produced a book of the top three matte painters in the world at the time and Max was one of them,” said Jim.

In his profession he is well-respected. We are happy that he is healthy and enjoying it.”