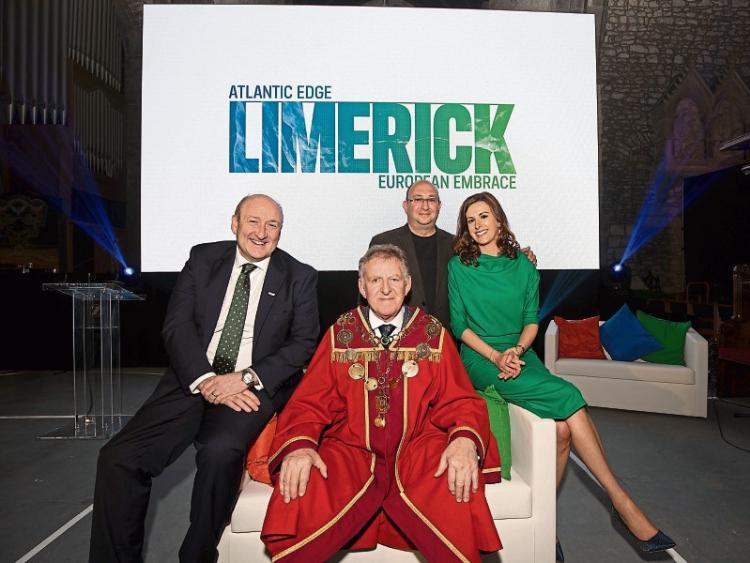 Limerick Council launched its new Limerick brand at the start of the month | PICTURE: Sean Curtin

That’s according to a new economic​ survey, released this week by Limerick City and County Council.

The Limerick Economic Monitor (LEM), published for the second year in a row, has seen the EY-DKM​ consultancy analyse Limerick’s economic status across a number of indicators, including employment, enterprise, investment, customer sentiment and commercial property.

The monitor suggests that there has been a 68% drop in the numbers of people out of work from a low recorded in January 2010.

And data for 2019 indicated that foreign direct investment had already matched the level for the whole of 2018 in the first nine months of the year.

The indigenous labour market also thrived in 2019, according to the report, with 561 new start-ups.

Other key figures validating Limerick’s status as one of Ireland’s leading locations to live and work in was that disposable income was €21,979 – the highest outside the capital. Some other notable milestones achieved in 2019 included securing the Ryder Cup for Adare Manor, the LEM states.

Speaking about ​the monitor, Mayor Michael Sheahan said the report is both positive and timely.

”We had a fantastic launch of our new brand position, a brand that will promote Limerick both domestically and internationally for inward investment across tourism, business and education. To have the economic monitor come out with such positive findings a week or so later reaffirms why Limerick has such reason for confidence,” he said.

The report suggests affordability remains a major competitive advantage for Limerick when it comes to attracting and retaining talent and investment. In addition to high disposable income, another key aspect is the relatively lower housing costs in Limerick, with median growing by almost 18% in the year to September 2019 yet they remain 18% lower than the national median. Likewise, rent levels were up 6% but remain 15% below the national average. Rents in Limerick county, while also rising, are almost 35% below the national average.

Vincent Murray, the council’s director of economic development added: “This latest report reflects the continued progress of our city and county. 2019 has seen many significant milestones occur for Limerick as we continue our ambitious plans to develop into the future. The statistics speak for themselves. Limerick is very much on an upward curve.”

The monitor suggests that a strong focus for council in 2020 should be to tackle both urban and rural dereliction.

“Revitalising the city centre is also a key priority for it and it has established a group to address underperformance in the city centre,” they report.

Looking to Brexit, it found that Limerick’s diversified economic base and the benefits of Shannon-Foynes Port and Shannon Airport should help to mitigate impacts in the region.

David McNamara, director with EY-DKM economic advisory said: “One year on, our second LEM shows that momentum continues to build in Limerick. It’s a city most definitely on the up and the LEM shows strong growth across a diverse range of indicators – from the economy to quality of life measures. There are many reasons to be positive about the future. The University of Limerick’s multi-million-euro investment plan for a city-centre campus, the re-development of O’Connell Street and the increasing workforce of global firms will help to improve the city centre and facilitate its resurgence.”