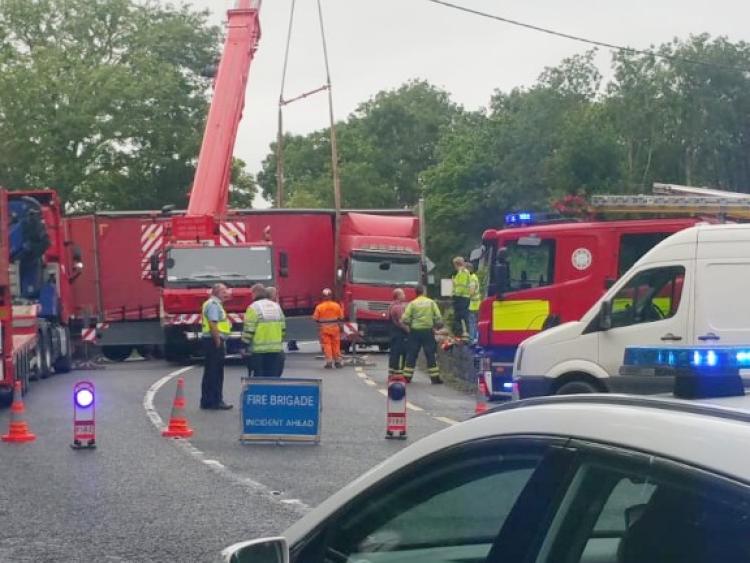 A crane removes the lorry on the Limerick side of Adare

THE N21 has just reopened following a truck that crashed on the Limerick side of Adare this morning, blocking the whole road.

There is traffic chaos in the locality with some people being stuck in traffic for over two hours.
A local told the Leader: "The crane came around 10.20 and quickly separated the back from the cab. They just took it away now. They were very prompt and professional."

However, another motorist who contacted the Leader was very critical of the traffic management plan.

"I was coming into Adare from the Rathkeale side. We were diverted left at the roundabout in the village. I've gone about two miles in 40 minutes. There are a load of articulated trucks and buses - they can barely get by each other by driving into the ditch. Cars are turning around and going back into Adare," said the driver.

Local sent this video of a crane removing the jack-knifed lorry on the Limerick side of Adare this morning. N21 now open @Limerick_Leader pic.twitter.com/qsRbHBggqS

A poor family of American tourists were spotted with their suitcases trying to get around the truck because their driver was on the other side.

"It has just been chaos," said the local.

Land in Glin and Foynes to go under the virtual hammer

The Great Limerick Run will now not take place at all in 2020 | PICTURE: DAVE GAYNOR