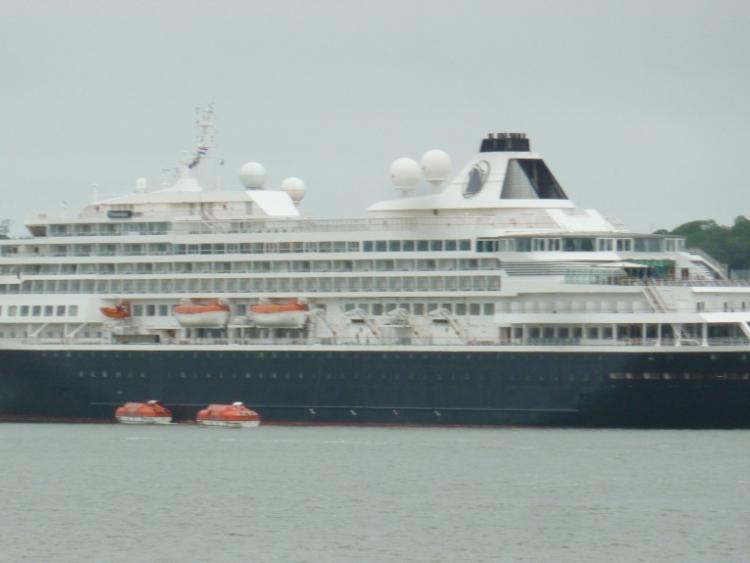 A WEST Limerick village received a major tourism boost as hundreds were brought into the region on the final voyage of a luxury cruise liner.

Last Thursday morning, the Prinsendam, owned by Holland America Line, sailed onto Foynes Island and was anchored at the port for 12 hours, allowing hundreds of tourists to enjoy the Foynes Flying Boat and Maritime Museum.

It was the first time ever a cruise vessel anchored off Foynes Island, and was its final voyage after 17 long years.

Passengers were shuttled ashore shortly after arriving and taken to various locations in Limerick city and county, West Clare and Dingle.

Shannon Foynes Port Company (SFPC) CEO, Pat Keating said they were delighted to facilitate the cruise ship in the busy port.  “We’ve had cruise ships dock in Foynes before but this is the first time a cruise vessel anchored specifically off Foynes Island.  Passengers ferried by tender to the pontoon at Foynes Yacht Club where they boarded coaches for various destinations or simply enjoyed Foynes itself on foot.

“It delivered a really nice tourism boost for the area, with the passengers visiting Limerick, Clare and Kerry.  It was great to see the Flying Boat & Maritime Museum getting an extra boost. It’s a fantastic tourism attraction and deserves as much recognition as it can get and all those who visited it will pass on the good word about it.”

Mr Keating added that while cargo is the core activity, the port authority was delighted to welcome this business.

“It was a busy morning and the cruise ship brought a great buzz to the area.  From an operational perspective, all passengers were transferred safely and comfortably to and from the vessel.

“By anchoring at Foynes Island, cruise liners can easily be accommodated at Foynes as it gives us more capacity in addition to the actual docks itself. Hopefully we will get to welcome many more cruise vessels to Foynes.”

The Prinsendam is the first cruise liner welcomed to Foynes this year, with another scheduled to dock next month, July 5.

The M/S Prinsendam is the smallest ship in Holland America Line's fleet at 204 metres.

Nicknamed the ‘Elegant Explorer’, the Prinsendam is a hugely popular ship, much loved by regular cruise enthusiasts. Thanks to her small size and low height she can navigate interesting routes most other cruise liners cannot. Her most recent voyages have included the Amazon, the Caribbean, South America, Antartica and now finally Europe where she will spend her last few months in the Holland America Line family.

The last voyages include the Mediterranean, Iberian Peninsula, British Isles, Ireland before making her final farewell on a 14-day expedition to the Norwegian North Cape.