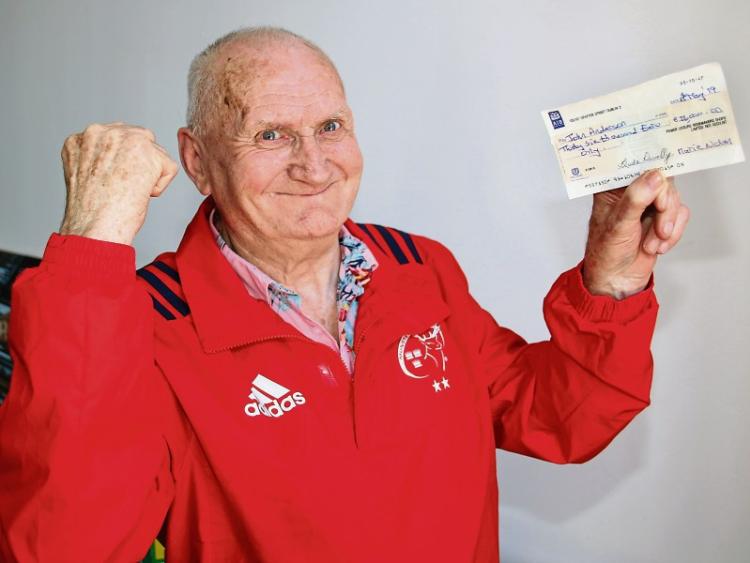 ON A cold November day John Anderson put €28,000 down on Man City to win the Premier League.

The well-known gambler from Doon didn’t think he would have to wait until a hot summer’s day to collect. At the time City were flying. They were top of the league and priced at only 2/7 to claim the title. John, aged 78, had a look at their upcoming fixture and thought the price would drop further.

He staked €28,000 confident in the knowledge he would be pocketing €8,000 long before the final day of the season.

“Liverpool went on their run and were top at Christmas. When Man City lost to Crystal Palace and Leicester over Christmas I said I’m in trouble here,” said John.

Then when Newcastle beat them in January he thought his goose was cooked and his €28,000 was gone down the swanny. But in Pep we trust and Guardiola’s men went on a 13 match winning streak which brought us to Sunday. A win for the Blues and John would be counting his cash. But after a week of football shocks another Liverpool miracle couldn’t be discounted.

When Liverpool scored early against Wolves and Glenn Murray put Brighton in front against Mac City John had his head in his hands. But his jangled nerves were immediately calmed by Sergio Aguero.

Three more goals and John was home and hosed. The retired farmer collected a cheque for €36,000 from Paddy Power on Monday which he deposited in the bank.

John had another lucky escape recently as he had €5,000 on Munster - of which he is a massive supporter - to beat Benetton. It took a monster 76th penalty from JJ Hanrahan to see the men in red claim a 15-13 victory.

“I am now betting 60 years and I have enjoyed it whether I win lose or draw. I believe I am a shrewd punter and I study what I am about to do. I always look before I leap,” said John.

This dates back to when he was 12 and had two shillings on a greyhound at a coursing event in Galbally at odds of 1/2. His biggest loss came in 2012 when he staked €56,000 on Leinster to beat Ospreys in the RaboDirect PRO12 final but he bounced back.

“I’ll keep betting until the well runs dry and it isn’t dry yet,” he laughs.

And while John enjoys gambling when the fun stops, stop. Gamblers Anonymous can be contacted by ringing 01 8721133.