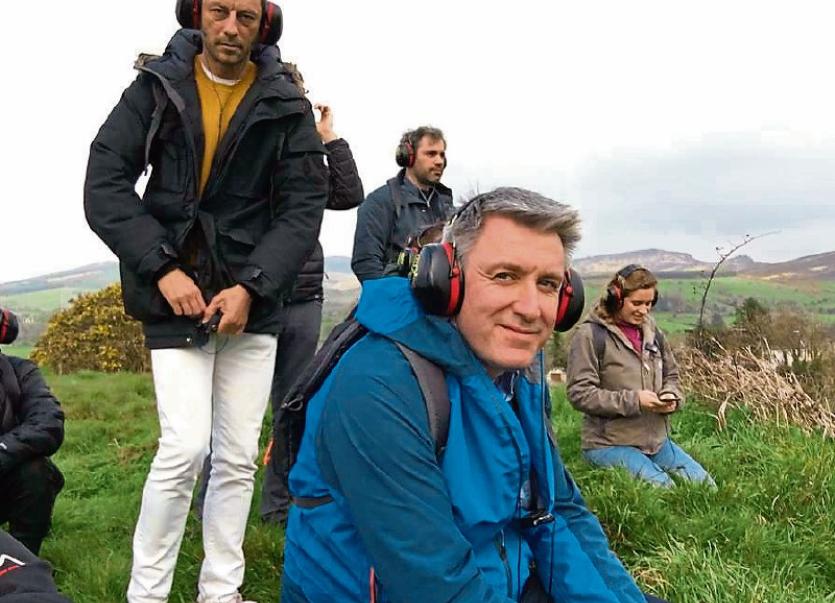 Diarmuid McIntyre, literally out in the field, with other sonic enthusiasts at HearSay

HearSay in Kilfinane needs to be seen to be believed or perhaps listened to to be understood.

The fourth International Audio Arts Festival ran from Thursday until Sunday. The village was alive from morning to night. During a walk up and down the Main Street you could hear a variety of tongues behind beaming smiles. Artists and contributors travelled from 18 countries and included winners of BAFTAs, Emmys and Golden Globes. Multiple day passes to HearSay 19 were capped at 405 - including over 100 from all around Ireland - and booked out in January. Registrations came from 31 countries in total.

Chairman of Kilfinane Community Council, Tommy O’Sullivan put it succinctly when he said: “A lot of them probably come from concrete jungles and arrive into Kilfinane and the surrounding countryside. They love it.”

There were over 100 events celebrating the crafted sound disciplines of radio documentary, film sound, audio fiction, sound art, audio features and narrative. They fell under the categories of Think, Converse, Encounter, Deepen, Experience, Celebrate and Performance.

There were 17 locations dotted all round the village. The main seven were the old church, teach na cille, the apple farm, convent chapel, public library, audio cinema and a sunken garden, located under a marquee off Main Street, complete with giant heaters and even chandeliers. It goes without saying the sound was perfect in every one.

Since its first edition in 2014, HearSay has grown into an event with a global reputation. The profile of HearSay 19 is reflected by the delegates, including from the UK alone - the head of BBC Sound, head of The Guardian Audio, and the head of Audible.

The only problem was to decide what to go to.

On Saturday afternoon and evening alone you had the creators of the critically acclaimed West Cork podcast - British journalists Jennifer Forde and Sam Bungey - and its American producer Jesse Baker speaking in the convent chapel. They gave honest and frank insights into making sense of and editing 150 interviews into a series. Like the intro in article, the first 30 seconds has “to sing” to hold the listener’s attention, said Jesse.

Next up in the convent chapel was American Joe Richman of the renowned Radio Diaries. Appropriately for the setting he gave a part sermon, part confessional and part love letter on how we convey feeling in sound. Those moments when voice, scene, plot, and luck converge to create stories we feel in our bodies.

Moving over to the sunken garden, Chris Brookes asked is it possible to get listeners to “enter” a news story in an immersive way, that brings them closer to the event and helps them understand? He spoke about a free app that walks listeners through a sex assault trial involving a Canadian police officer found not guilty. Entitled Consent, it takes listeners from a bar to the courthouse.

While Saturday night Mass was on in the church, Haiku was happening next door. These four events are only scratching the surface of HearSay.

The man who had the vision is the festival founder and director, Diarmuid McIntyre.

“The model of the event is the world’s finest audio makers taking over an Irish mountain village for four days of inspiration with 100 events - performance, workshops, talks, screenings, encounters, installations - in unconventional locations throughout the village,” said Diarmuid.

“It’s also a festival that brings together two communities - the international creative audio community and the Ballyhoura community. The engagement with the south limerick community which do not generally have access to arts is a key driver of the festival. One of the things that gives us motivation is to provide local people with access to exciting new art forms of a world-class standard on their doorstep,” he continued.

All locals within five miles are provided with a pass to access events free of charge. There was just under 2,000 additional bed nights in south Limerick as a result of HearSay19.

The economic boost to Kilfinane - not just to those in the betting shop who backed Tiger Roll in the Grand National - on a quiet weekend in April is massive. Diarmuid and his team of volunteers run a superbly organised festival on a tight budget.

On behalf of the international visitors, Joe Richman summed HearSay up when he said: “This is something so special and so unique. We come from so many countries and learn from each other. It is inspirational.”

And on behalf of locals, Tommy O’Sullivan said it has been a huge boost to businesses in an economic sense and to parishioners in a creative sense.

“It took a while for the community to understand what was going on but they have completely bought into it now,” said Tommy.

He says the exposure Kilfinane has gotten is huge.

“There was 2,000 bed nights alone from HearSay, which is enormous for the local economy. And this type of clientele, we wouldn't normally be able to reach them. At one stage on Saturday night, HearSay was trending on Twitter. It is brilliant to promote tourism and all the attractions we have,” said Tommy.

The big thing going forward is that it secures more funding, he says.

“We are up against a lot of festivals. They are getting the money and we are not. We have the more unique idea - there isn’t another festival like it in the world but we need to secure more funding,” said Tommy.

That sounds good to everyone in Kilfinane.