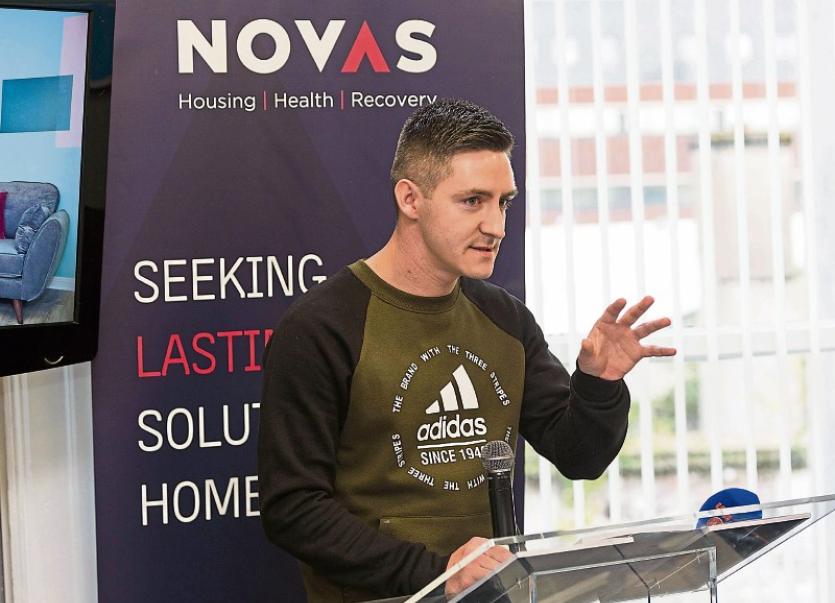 A REFORMED heroin addict has been hailed “a leader for our city” by the Metropolitan Mayor of Limerick for his extensive efforts in tackling his own addiction and advocating for victims of homelessness and drug misuse.

Mayor Daniel Butler made the comments about O’Malley Park man Ger Lynch at the launch of Novas’ new headquarters on O’Connell Street and its annual report on Friday morning.

As youth homelessness increases Novas presents a passionate and caring approach to supporting people through housing, health and recovery. Their annual report, launched today, should be mandatory reading for every member of government. #Limerick pic.twitter.com/0q58u4Rbkd

The 32-year-old father-of-seven, who spoke to the Limerick Leader about his addiction struggles in September, delivered a strong speech in front politicians, outreach workers and Novas management.

Novas CEO launching the annual report this morning, highlighting the expansion of Housing First by Novas in Limerick and Kerry with @countykerry and @LimerickCouncil pic.twitter.com/x37AAS2zMm

“It’s very easy to run away, but it’s a lot more gratifying to stand and say: ‘I am not doing this anymore. I don’t have to do this anymore.’ [Novas] really energised me. It took me from a place of darkness where there was no light--not even a pin prick. There was no light. To all of a sudden being surrounded by light, by nothing but hope. You enter into a building so hopeless that you think that this is where I am going to end up being carried out of a box, to exiting with a new, energised life.”

He thanked his partner Serena for being the “foundation” of his recovery.

“I was a vessel for drugs. I wasn’t a person. And just the lads having confidence in me, it really made me see me as somebody who can give back. Somebody that can help,” Ger concluded.

‘McGarry House was the place I thought I was going to die...but it was a stepping stone to recovery’ pic.twitter.com/pEQxumpkTX

As @DanielButlerFG said ‘you are now a leader in our community’ Ger. We NEED leaders with lived experience to ensure we eradicate stigma, discrimination & above all complacency. ❤️❤️❤️ https://t.co/A40lC5qncO

Mayor Butler commended the staff and service users of Novas, which was established in 2002, and praised Mr Lynch for his recovery.

“You have become a voice for people who have no voice. You have become a leader for our city. Not just for the citizens who are affected by homelessness, but every citizen in this city,” he said on Friday.