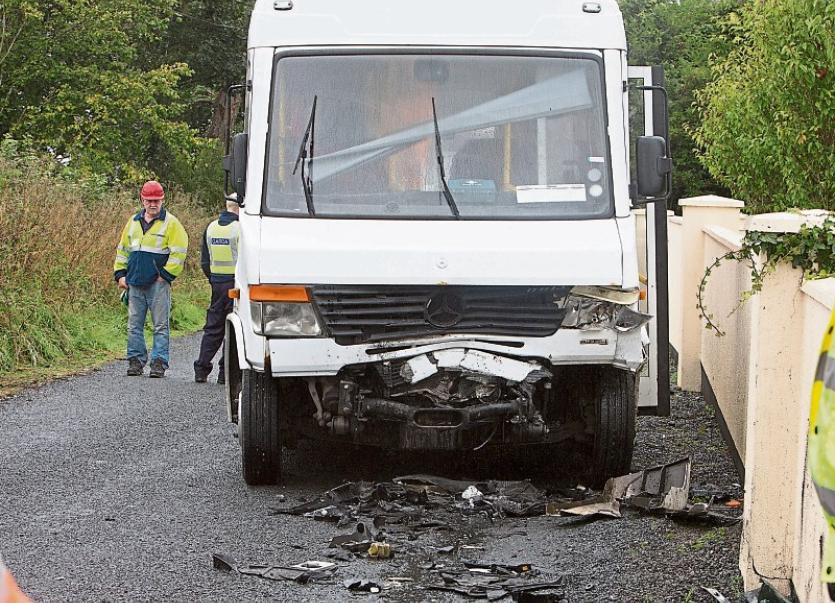 The front of the bus which was transporting students to St Mary's Secondary School, Newport | Picture: Liam Burke

THE PRINCIPAL of St Mary’s Secondary School, Newport, said the emergency services’ response to a school bus crash this Thursday morning was “inspirational”.

Seven teenagers, the bus driver and two people in the car were rushed to University Hospital Limerick within minutes of the alarm being raised shortly after 8am.

Firefighters, drawn from the city, Cappamore and Newport had to cut the two people out of the car and assisted paramedics from the National Ambulance Service in removing pupils from the bus.

Gardai cordoned off the crash scene and used their expertise in the emergency situation.

“I would like to offer sincere thanks to the emergency services for the prompt and professional care they showed our students this morning. To see them in action - fire service, ambulance personnel and gardai - they are really inspirational men and women at work. They were all superb,” said Mr Cusack, who is from Murroe.

He said they became aware of the incident at Ardvarna, Lisnagry, shortly after it occurred.

“Immediately our thoughts were focused on the wellbeing of our students, families of the students and, of course, all involved. A number of our students, seven in total, were involved. “We met with students and parents and offered support and words of comfort. We immediately initiated our critical incident policy. We notified NEPS [National Educational Psychological Service] who are on standby to offer support to our students and to families concerned. Our staff are to be commended for the way they rallied to offer support this morning and are continuing that support and are obviously very concerned about the students involved,” said Mr Cusack.

A spokesperson for University Hospital Limerick said: “No patients have been admitted at this time, all are still under review and injuries are not thought to be serious at this point.”

Gardai at Castleconnell are investigating the circumstances surrounding the collision.