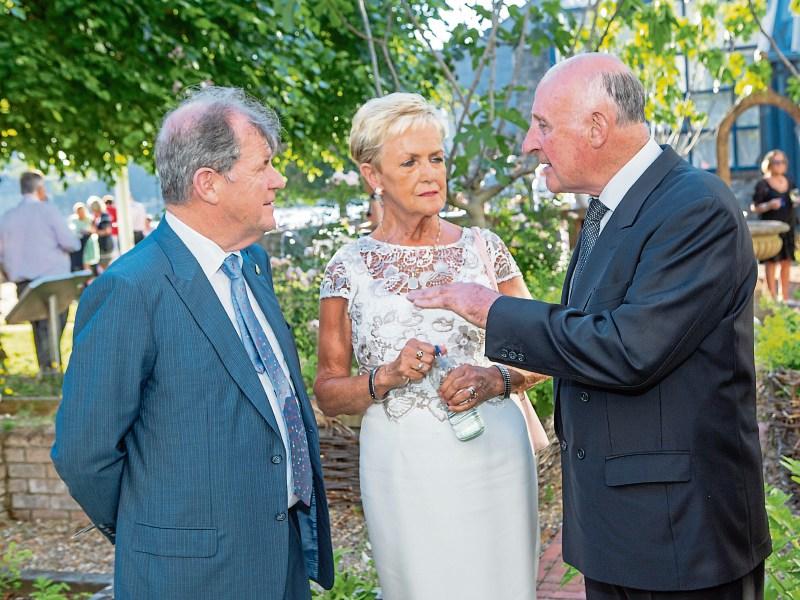 Welcome to the club: Freeman JP McManus with Ann McCabe and retired Det Gda Ben O’Sullivan, who was made a Freeman of Limerick with late Jerry McCabe Picture: Liam Burke/Press 22

And more than 22 years later, both men were honoured for their valour by outgoing Mayor Cllr Stephen Keary and Limerick City and County Council CEO Conn Murray at a major reception at Merchant’s Quay.

After Mr Murray read aloud the text of the scroll of freedom, both Mr O’Sullivan and Mr McCabe’s wife Ann McCabe delivered powerful speeches at the packed event. The retired officer said that he was “lucky to escape with my life” that day.

“People said at the time that I was invincible but that is totally inaccurate.  If I had been shot in the same places as Jerry was, I would be with Jerry today.”

“Both Jerry and I held each other in such high esteem.  We entered the gardaí at the same time and progressed through the ranks together until that fateful day in 1996.  My family didn’t have to suffer what Jerry’s family did but it was a struggle as I recovered. I am humbled with being conferred with the Honorary Freedom of Limerick.  Jerry deserves to be adored, I deserve to be remembered. Jerry paid the ultimate sacrifice,” he said.

Ann McCabe said that her family were delighted and honoured with the posthumous award, and that her late husband had died for Ireland.

“It was not his choice, I would hope that we would reflect not on the way Jerry died, but on the way he lived – a life dedicated to his much cherished family, total commitment to his duties as a member of the special branch of An Garda Síochána and a willingness to help anybody in the community,” she said.

Eminent locals at the ceremony included Freeman of Limerick and billionaire, JP McManus.