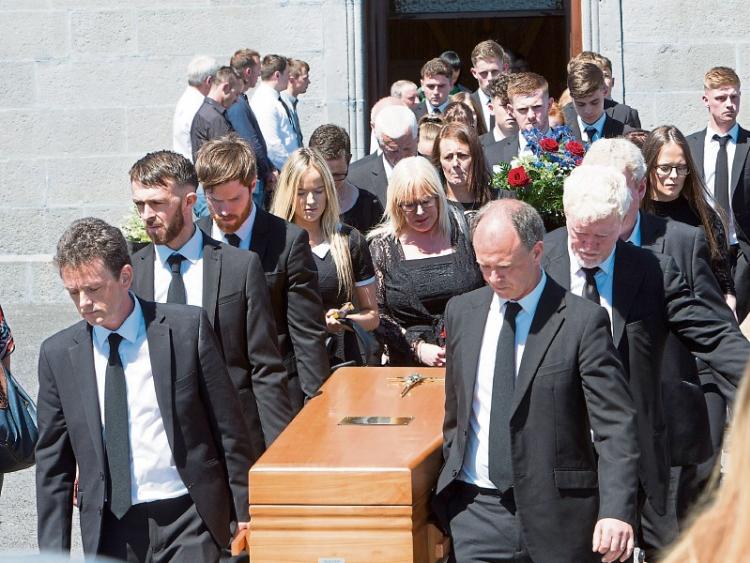 THE TRIPLET sister of the Limerick teenager who tragically died in an accident while holidaying in Spain, has led tributes at his funeral Mass this Sunday.

Askeaton teenager Jack Walsh died following a 39-foot balcony fall in Santa Ponsa two weeks ago and had been on life support until June 14.

Jack, aged 19, was laid to rest at Reilig Mhuire cemetery after the funeral Mass at St Mary’s church in his hometown.

During the Mass, items emblematic of Jack’s life were presented at the altar. A pair of earphones represented Jack’s “healthy addiction to music”. A hurley, representing Jack’s love of sport was also presented. A pair of glasses “or specs” represented his social life. Jack was given the nickname “Specs” by close friends. A hammer was also presented, representing the “promising future he had carved for himself”, as he had started a job at Aughinish Alumina in recent months.

“We grew up believing that we would live forever. You deserved to live that long, but life is unfair. This isn’t just a sad story, it’s an absolute tragedy. But I hope I don’t embarrass you too much, Jack. I can almost picture him now cringing. I promise I will try not to cry,” Tara started.

“Jack acted as if he was five years older than myself and Orla. In reality, he was just four minutes. He was so protective. At times, you could say, a bit overprotective. But looking back, he was just looking out for us. If we were in trouble, or just a tiny bit upset, Jack would make it his business to see us smile again. He wasn’t the biggest lad, but would stand up to anyone who messed with his sisters."

Tara praised Jack’s soccer skills and spoke about how the triplets used to play Fifa together.

In her powerful speech, she said: “Heartbreakingly, I kept thinking about how Jack must have felt the night he passed. I just kept thinking how scared he must have been. It broke my heart to think about it and it still does. I would have given anything to be there with him. But then I remember that his best friends were there to comfort him.

“I just can’t put into words how much he loved you. It really does ease the pain to know that you were by his side. I will be forever grateful for that. It’s the best friendship I have ever seen and probably will ever see.”

She spoke of the delight Jack felt when he started his job at Aughinish Alumina.

“I would like to believe that Jack and I shared a lot in common, but what comes to mind first is our bravery and our passion to fight, even when we get knocked down. Jack was a fighter. And for the past six months, he fought to find his new career, and then he found it. He loved Aughinish."

She added: “We must continue to be strong. Jack wouldn’t want it any other way. Today, Orla and I have not only lost a best friend; but a third of our hopes and our dreams. A little bit of me died with you Jack but, honestly, I never want to be whole again because you are part of me. We are triplets, we are basically one.”