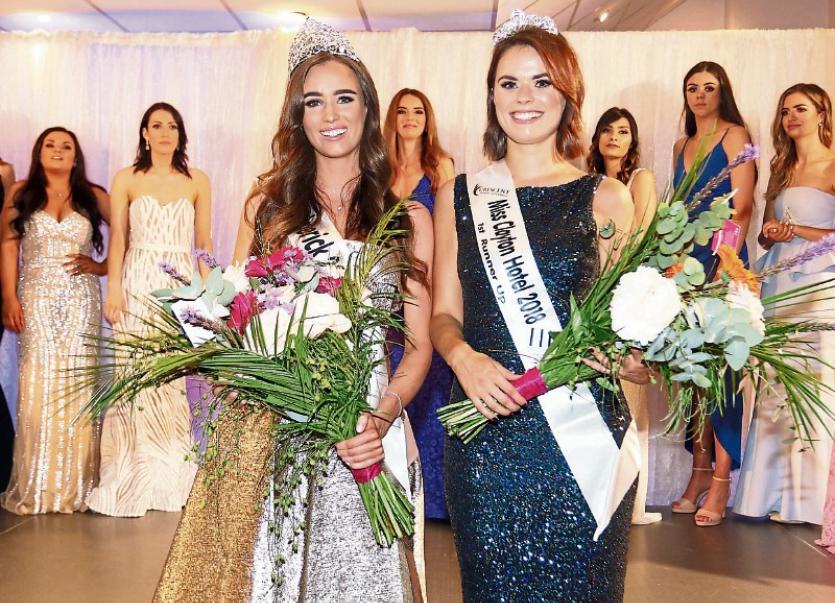 A NINETEEN-year-old genetics student has proven she has both beauty and brains in her DNA having been crowned Miss Limerick 2018.

Beibhinn Haren from Clarina was “surprised and delighted” when her named was called out as the winner of the coveted title just after 11pm on Thursday night.

Thirteen young women had put their best foot forward on the catwalk at the Clayton Hotel in Limerick in a bid to take home one of the two tiaras up for grabs on the night.

Laura Mansbridge from Dooradoyle, a graduate of UL and a former student of Crescent College Comprehensive was crowned Miss Clayton Hotel first runner-up.

“I was delighted,” said Beibhinn. “I knew that Laura would get one of the places - she was really nice. I was definitely surprised when my own name was called. I saw my mom and she was crying and then I thought I was going to start crying,” she added.

Beibhinn was accompanied at the Clayton Hotel by her parents Brid Malone and Martin Haren and her sister Grace, 16. She enjoyed a low-key celebratory drink with her family in House after the contest.

The former student of Laurel Hill Colaiste who wowed on stage in a golden strapless ballgown from The Ivory Closet is studying genetics in UCC.

“I was thinking of doing post grad medicine but I’ve actually really warmed to my course. I really do like it,” said Beibhinn who hopes to qualify as a geneticist.

“I would be working in a hospital or else open my own research lab. I’m going into second year in September. It’s a four year course with a masters maybe afterwards. First year was an introduction to genetics and science.”

She admires Audrey’s Hepburn’s style - “the classic shift dress” and would like to pursue some part-time modelling.

“Kendall Jenner and Gigi Hadid would be my favourite models,” she said.

Sponsored by the Crescent Shopping Centre, the Miss Limerick Ireland World Pageant 2018, which was in association with The Holman Lee Agency, is one of the most glitzy events on Limerick’s social calendar.

Beibhinn will now represent Limerick in the Miss Ireland contest later this year while Laura goes through to the wild card selection of the competition.